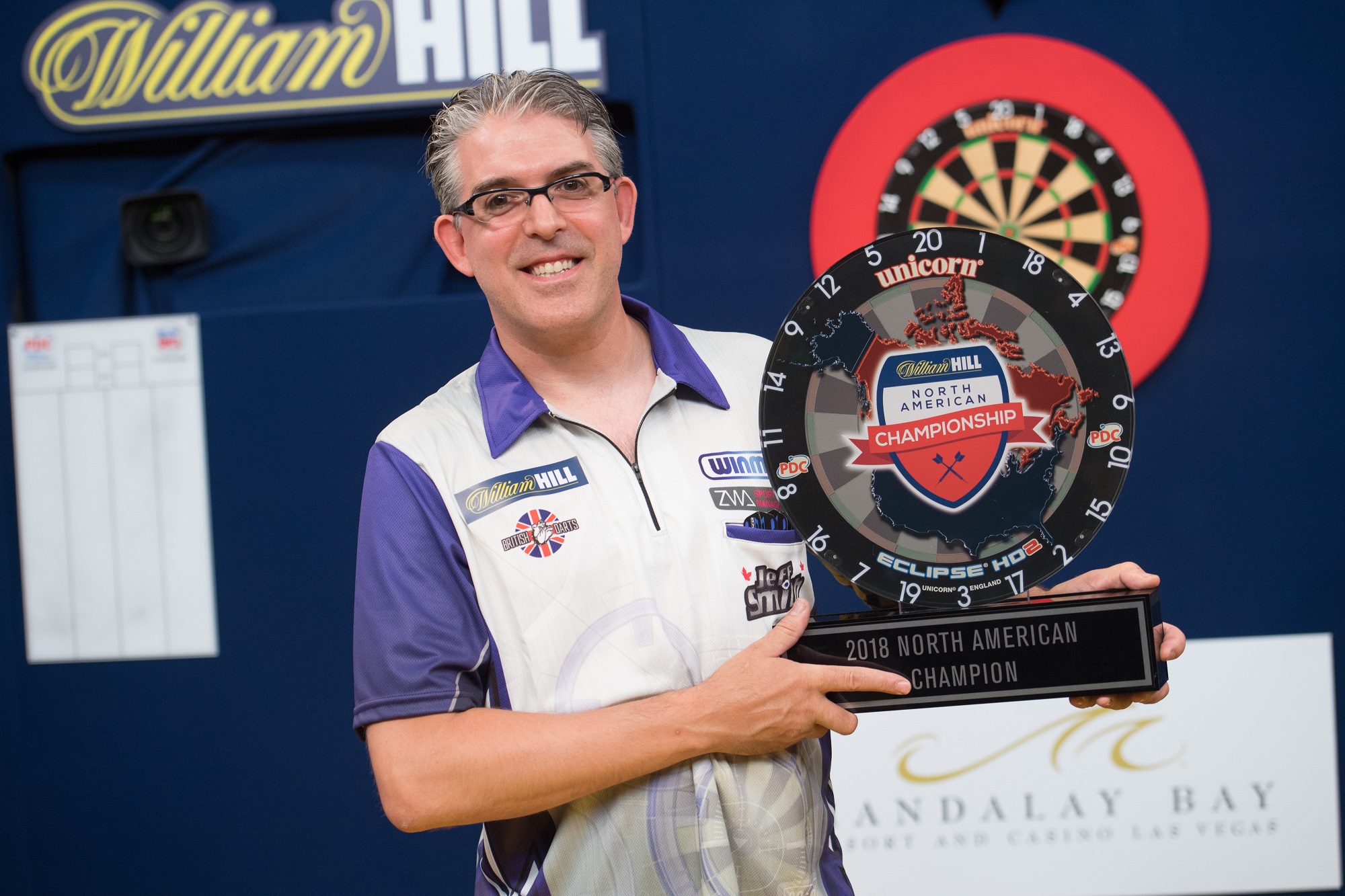 The biggest week of the year in North American darts is now upon us as the North American Darts Championship and US Darts Masters take place from July 4-5 in Las Vegas.

Jeff Smith lifted the title last year, after he defeated John Norman Jr in the final, while Willard Bruguier lifted the crown two years ago. Ross Snook, Darin Young and Dave Richardson have also reigned victorious in the prestigious event.

The North American Darts Championship (NADC) consists of eight qualifiers – who progress through the two days of qualifying at the Mandalay Bay Resort & Casino in the heart of Las Vegas.

Each winner of the four qualifying events will gain a spot in the NADC, as well as the US Darts Masters, while the four at the top of the leaderboard on points will also come through.

We take a look at the 10 names to look out for ahead of the next two days of qualifying in Sin City.

He’s arguably the most well-known player from the North American region and now a seasoned professional who is living in England, but he’s not been successful in the North American Darts Championship so far, could this year be ‘Awesome Dawson’s time to shine?

Murschell, 23, is a two-time Quebec Open champion and a Greater Vancouver Open winner, so he knows how to win on American soil.

Despite predominantly being a soft-tip arrowsmith, Danny Baggish is a great shooter of an arrow on a steal-tip board also, and having won nine ADO events in recent years he’s without a doubt one to watch in Las Vegas.

Baggish currently sits in joint ninth on the BDO American rankings, having recently lifted the Cherry Bomb International in Florida and reached the final of the Charlotte Open in April.

He’s the most successful American to ever throw a dart, a former World Matchplay champion, a former Desert Classic champion; it could be no other than ‘The Bald Eagle’ Larry Butler.

Butler has won a staggering 38 ADO titles across the pond, on top of his two major successes in the PDC.

Just over a year ago Butler was in everyone’s thoughts having suffered a heart attack and therefore undergoing surgery in Ohio.

Now 13 months on from a tough occasion, he’s back doing what he loves. It would be some story if 61-year-old Butler was to come through the qualifiers 25 years after winning the inaugural World Matchplay.

Now we move onto potentially the most absurd picks out of the 10 – Kenya’s Patrick Kithi.

Kithi has lifted four ADO titles over in the states and most recently won the prestigious 50th Oregon Open, beating Michael Yaksitch in the final to win the tournament for a third time.

Could we have a Kenyan in a PDC tournament? It would be a huge surprise if Kithi came through, but who knows!

A man well on course of a debut at the PDC World Darts Championship after a triumphant year on the Championship Darts Circuit.

He currently sits in second on the leaderboard behind Darin Young. Campbell lifted the ADO Syracuse Open earlier this year, and is in the form of his life. He’s a shoo-in for qualification, surely?

‘Big Daddy’ hasn’t quite reached the echelons of Larry Butler, but he’s heading in the right direction.

He’s lifted seven ADO titles, as well as two Las Vegas Opens, so he knows how to cross the finishing line in Sin City.

Young has the experience also, which not a lot of American players can say they’ve got. He’s appeared at both the PDC World Championships, Grand Slam of Darts and World Cup of Darts as well as four Desert Classics.

If you think Michael van Gerwen has a high win percentage, you’re wrong!

Smith is possibly the second best player to come out of Canada, having won his fifth Halifax Open and his second Port City Open already this year.

Smith would become the first player to win the North American Darts Championship for a second time if he was to come through the qualifiers and reign supreme on the big stage in Las Vegas.

He’s yet to even qualify for the North American Darts Championship and that’s a huge surprise bearing in mind the quality of Leonard Gates.

‘Soldier Gates’ currently stands second on the BDO American rankings, having won the Camellia Classic, Colorado Open and Charlotte Open in the last seven months, and has lifted 31 ADO titles in his glowing career across the pond.

Is now the time Gates finally books his place in a PDC event? I think so.

What else is there to say? It’s the legendary, John Part.

Part has been far from his best in recent months after losing his PDC Tour Card, but in a similar situation to Larry Butler, and what a fairytale story it would be if Part was to roll back to years and come through the qualifiers.

He celebrated his 53rd birthday at the weekend; he’s due a belated birthday present.

US Darts Masters Order or Merit after two qualifiers