The Money Game With Ochepedia – Order Of Merit

What Darts Tournaments Do You Class As Majors? 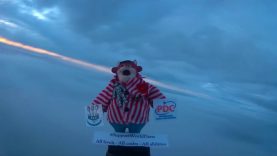 After 5 weeks of planning, On Saturday July 15th 2017 I launched my first ever High Altitude balloon project in aim to fulfill a personal ambition to take part in my love for space and science in combination to try and promote world darts on a global scale under the project names #SupportWorldDarts and #BullyInSpace.

Darts is a huge passion of mine and has been since I was 4 years old. Most of you who are into the darts will know the mascot “Bendy Bully” who has taken part in the videos flight as a global representative to the sport in support of Professionals, Amateurs and Beginners of the game. (Thanks to Emma Jayne Hagerty for the loan of mini bendy bully you now own the first ever darts mascot to go into the stratosphere lol )

The project was also to raise awareness for Prostate Cancer UK as a great friend of mine Martin WOLFIE Adams has been battling prostate cancer for a while. So I added the PCUK logo pin to my Bullseye mascot in the video to show support and love for those battling and who have lost their lives through P.C.

Second charity : London based Hearts of Darts, who do amazing things for under privileged and disabled people through fund raising and exhibitions featuring world class darts players from the amateur and professional circuit. ( Heart of Darts logo pin badge attached to bully shirt too )

4th charity: Marie Curie Hospices, my mother Carole Banks died from a very sad and long illness with Chronic Obstructive Pulmonary Disease on March 10th 2017 and totally changed my life. Featuring Marie Curie hospices in the project is in respect to the doctors/nurses/scientists for the quality of service they provide for people facing end of life care.

I launched the 200g weather balloon and payload containing, 300g parachute, GPS trackers, 2 GoPro style cameras and a back up battery sealed in a polystyrene insulated box at 04.50hrs on July 15th 2017 from Clent in West Midlands.

As it was my first my attempt and only really knew what to do through YouTube videos, I was just curious to see if this would even work at all so I kept it as basic as I could, the results blew my mind and gave me back more than I could possibly wish for.

The balloon was sadly not measured in altitude or outside temperature but I have spoke to PRO weather balloon experts and they have said by going on the video footage I think it reached roughly 105-120,000 ft and faced outside temp of -45 to -55 degrees.

The most amazing tale of this story is something I couldn’t even make up in my dreams and if hadn’t have happened to me I wouldn’t have even believed it myself.

Not only did I launch the balloon as a total novice and first timer, it drifted from Birmingham 119.1 miles and landed at a school in Frimley which is in throwing distance of (The home of world darts) Lakeside Complex Frimley Green to where I go religiously and to where the BDO World Darts Championships is held every year and many other darts events are held throughout the year. The odds of that were ridiculous but to top it off as I did it in memory of my mother it landed safe and secure from all that height into a sealed tennis court safely until it was retrieved by my friend Lynn Alden who lived close and picked it up after sharing my news on Facebook. After a 2 hour drive we met her and picked up the payload to find it had recorded the entire trip and the battery, camera and trackers returned in full working order, even with the Bully mascot in perfect condition.

Now I’m open minded but for me to launch a balloon from nr Birmingham, have it fly all the way to the same village as where they hold the Lakeside World darts championships, land in a secure tennis court where it cant be touched on Wimbledon finals weekend (my mom LOVED tennis and Wimbledon) ??? Its just beyond words and explanation LOL

– Guys I know it might not be the best thing you ever seen but I am extremely proud of my achievement and hope this gets a lot of views around the world and spreads the word!