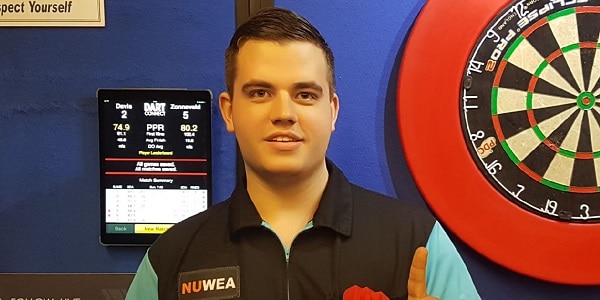 20-Year-old Niels Zonneveld won his PDC tour card by defeating Christian Goedl 5-1 in the final of Day one of European Q School at the Halle 39 Hildesheim, Germany.

A field of 249 players, which included Darius Labanauskas and Cody Harris who competed in the recent PDC World Darts Championship at Alexandra Palace in London and the return of Co Stompe, a former World Cup of Darts winner back in 2010 alongside fellow Dutchman and Five Times World Champion Raymond Van Barneveld.

Niels Zonneveld, who competed on the Development Tour for the first-time last year and won a Title back in April, came through the field in Germany by defeating Stefan Nilles, Gabriel Florin Olar, Patrick Van den Boogaard, Mike De Decker, Sebastian Steyer, Gergely Lakatos and Nico Schlund on route to the final.

Zonneveld kicked off the final with back to back legs of 15 and 14 darters when Goedl broke back with an 18 darter. From then on, the Dutchman was in complete control hitting back to back 15 darters and finishing the match with a 12-dart leg to claim his tour card!

The Austrian Christian Goedl, who had competed on the European Tour last year, came through the field by defeating Dominic Keller, Daniel Sprudzs, Andreas Flamme, Roxy James Rodriquez, Ricardo Pietreczko, John Michael and Hannes Schnier but was unable to claim his tour card automatically on Day One and will be aiming to kick on from his run over the next three days.

There were last 16 runs for Lithuania’s Darius Labanauskas, Finland’s Marko Kantele and Belgium’s Geert De Vos who came over from the BDO this year along with fellow Belgian Andy Baetens hoping to join the PDC circuit alongside their countryman’s Dimitri Van den Bergh and the Huybrechts brothers Kim and Ronny.

European Q School will continue on Friday with a field of 248* players at Halle 39 Hildesheim aiming to either win their tour card back or win it for the first time! All live scores and results will at tv.dartconnect.com with games commencing at 12pm local time and all games are the best of nine legs.

Everything you need to know ahead of European Qualifying School

What can we expect from Rob Cross this year?