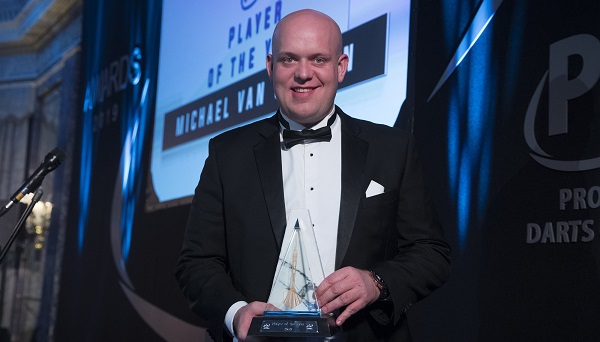 The PDC held their Annual Awards Night on Monday to celebrate the success and achievements of 2018 from all players on the PDC Tour.

Firstly, Awards were given to players that achieved Nine Dart Finishes in 2018 both on TV and off TV. Gary Anderson and Dimitri Van den Bergh both achieved nine dart finishes on TV in 2018 and were awarded with a Gold Pin Badge. A number of players achieved nine dart finishes off the TV cameras in 2018 and the players to pick up their Silver Pin Badge on the night were Michael Van Gerwen, Ian White, Stephen Bunting, Nathan Aspinall, Steve Hine and George Killington.

The Next Award was for the Best Newcomer to the PDC Pro Tour and the Nominees were Youngster Luke Humphries, Dutchman Danny Noppert, Germany’s Gabriel Clemens and England’s Ryan Joyce. The Winner was Luke Humphries, who had a successful first year on the Pro Tour reaching his first semi final in October, Winning the Development Tour for the second year in the row and making the World Championship Quarter Finals defeating Rob Cross along the way and eventually losing out to Michael Smith.

The Next Award was for the Fans Player of the Year where the fans were allowed to pick their favourite or who they think had the best year out of all the players. The two players who received the most votes were Gary Anderson and Michael Van Gerwen. The Winner was Gary Anderson as fans thought he had the better year winning 4 pro tour titles and winning the UK Open, World Matchplay, US Masters and Champions League of Darts for the first time in his incredible career.

The Next Award was for the PDPA Players’ Player of the Year where the Pro’s decided who they thought had the best year on Tour and the two players who received the most votes were Michael Van Gerwen and Michael Smith. The Winner was Michael Smith, who had arguably the greatest year so far in his PDC Career picking up 2 Pro Tour titles, A first TV Stage title in Shanghai and reaching the finals of The Premier League, Melbourne Masters, World Series Finals and of course the World Championships.

The Next Award was for the Young Player of the Year and the Nominees were Germany’s Number One Max Hopp, Belgium’s Dimitri Van den Bergh, a Grand Slam Quarter Finalist, Jeffrey De Zwaan, a World Matchplay Semi Finalist and Luke Humphries, a World Championship Quarter Finalist. The Winner was Max Hopp who had a break through year winning his first senior PDC Title winning the German Darts Open and then later in the year following it up by winning Players Championship 19 in Dublin and reaching his first major semi final after the European Championships and eventually breaking into the top 32 for the first time.

The Next Award was for the PDC Hall of Fame Inductee and the winner was Rod Harrington, a PDC Director and a Former Two Time World Matchplay Champion celebrating his achievements and the hard work he puts into the PDC, Sky Sports and growing young players into top professionals.

The Final Award was for the PDC Player of the Year and the Nominees were Michael Van Gerwen, Gary Anderson, Michael Smith and James Wade, who won the European Championships and the World Series Finals back to back and earning his place back in the Premier League for 2019. The Winner was of course the World Number One Michael Van Gerwen, who won an incredible 19 Tournaments in 2018 which included the Masters, Premier League, Auckland Masters, The World Grand Prix and of course The World Championships, claiming the Sid Waddell Trophy for the Third time in his career and becoming King of Darts yet again!

Was the price right for you?