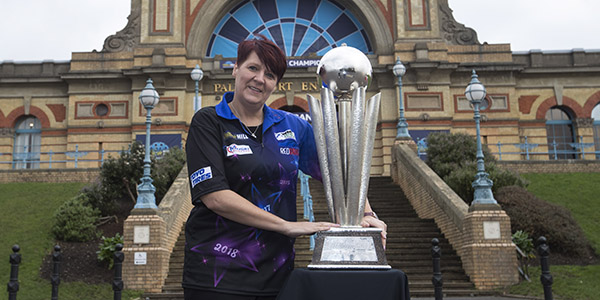 It’s the biggest darts event on the calendar, and it returns, bigger than ever, with 96 throwers, from 28 nations, competing for £2.5million in prize money. We look ahead to what will be a special couple of weeks at Alexandra Palace.

This year sees six additional sessions, 24 added competitors – including two ladies – and many looking to change their lives by lifting the Sid Waddell Trophy, and trousering £500,000 in the process.

Rob Cross was labelled the Leicester City of the darting scene as he conquered the world following a one-sided 7-2 victory over Phil Taylor in January’s final; ‘The Power’ departed the Alexandra Palace stage for a final time, as he called time on his magnificent career. Cross will be defending his title this year after triumphing 12 months ago – when very few expected the Hastings-based ace to do so.

Despite Cross having lifted the trophy last year, once again no one is really mentioning him for the title, could the world number two possibly shock the world of darts for a second successive season? ‘Voltage’ will take on either promising youngster Jeffrey de Zwaan or India’s Nitin Kumar in the second round and a stack of pressure will be hanging on the shoulders of Cross with many backing the defending champion to endure an early exit.

Regardless of Cross being the defending champion and six throwers having lifted major crowns this year, it’s hard to look past Gary Anderson and Michael van Gerwen. The duo have both been crowned World Champion twice previously and will be hoping to complete the treble as they return to London once again.

Burnam-on-Sea-based Anderson will face either Ireland’s Tom Kirby Memorial winner Kevin Burness or Paul Nicholson – who will be returning to Alexandra Palace after a four-year qualification drought. Anderson’s main rival for the title, van Gerwen, will face either Alan Tabern or Australia’s DPA Tour table-topper Raymond Smith, with the chance of facing Dutch legend Raymond van Barneveld on the cards.

‘Barney’ will call time on his darting career after the 2020 World Darts Championship as he sets sight on winning a sixth world title this year at Alexandra Palace. Van Barneveld will face a tough test in the second round, with either Matthew Edgar or Lithuania’s Darius Labanauskas progressing to face the Dutchman.

Adrian Lewis is also involved in that particular quarter of the draw and could potentially take on van Barneveld in the third round. Lewis will be looking to counteract last year’s disappointing first round exit at the hands of Germany’s Kevin Munch – who sent the crowd into disbelieve as the outsider breezed past the two-time World Champion, with a convincing 3-1 win.

Peter Wright has had a below-par year but will be another of those who could potentially lift the Sid Waddell Trophy on New Year’s Day. Wright enlightened the stage back in 2014 when he agonisingly missed out on being crowned World Champion, due to a top-notch display from van Gerwen. ‘Snakebite’ will avoid the likes of Anderson, van Gerwen and Players Championship Finals winner Daryl Gurney until the final, meaning he will be one of the favourites to contest in the final on the opening day of 2019.

Wright will face either Spain’s Toni Alcinas – who has managed to get past the first round just once in his three World Championship appearances – or New Zealand’s debutant Craig Ross.

28 nations will be represented at this year’s 26th edition of the World Darts Championship, including the Czech Republic – who will be represented by Karel Sedlacek. Sedlacek came through the Eastern European qualifier earlier this year after becoming the first Czech player to appear on the European Tour. The two-time World Cup of Darts representative will face Keegan Brown in the opening round with the chance of taking on Jelle Klaasen.

Krzysztof Ratajski is another Eastern Europe-based thrower who will be heading to Alexandra Palace after the ‘Polish Eagle’ won three Pro Tour events this year without having a tour card to hand him a spot at the World Championship for a second successive year. Japanese ace Seigo Asada will the man standing in front of Ratajski as he hopes to put last year’s early exit behind him.

South America, specifically Brazil, will have a representative with Diogo Portela coming through a qualifying event held in Rio de Janeiro earlier this year. ‘Braziliant’ became the first Brazilian to feature at the World Championship Darts Championship 12 months ago when he suffered a first round defeat to Peter Wright. Portela will once again face a tenacious opponent in former French Open winner Ron Meulenkamp.

Asia will be a prominent force at this year’s World Championship with six Asian throwers qualifying for the event. India’s Nitin Kumar, Philippines’ Lourence Ilagan and Noel Malicdem, Hong Kong’s Royden Lam, Japan’s Seigo Asada and the ‘Singapore Slinger’ Paul Lim will all be involved during the festive period. Lim is the stand-out name amongst the sextet after him enlightening the Ally Pally stage with his brilliance 12 months ago – when he almost pulled off the perfect leg, 26 years after nailing the first ever nine-darter at a World Championship.

With all that mentioned, two female competitors will also take to the stage over the next week or so with both four-time World Champion Lisa Ashton and three-time World Champion Anastasia Dobromyslova featuring at this year’s tournament. Ashton will feature on the opening day with a tough test against Jan Dekker while Dobromyslova – who is one of two Russians heading to London – will face Ryan Joyce on Monday evening.

The 2019 William Hill World Darts Championship will commence on Thursday evening at Alexandra Palace in London with a 96-strong field battling it out for the chance to change their life and earn £2.5million in prize money.

Luck of the Irish at PDC World Championship