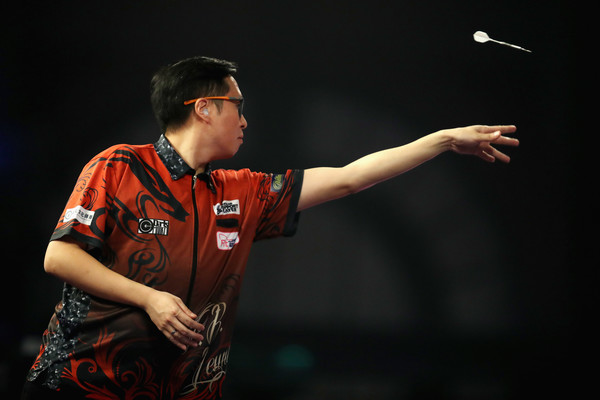 After relocating to Liverpool, Hong Kong’s Kai Fan Leung wants to provide a new adventure for the Asian darting community

Five years ago Royden Lam and Scott MacKenzie placed Hong Kong darts firmly on the map. Defeats over Wales and Ireland secured the country’s most significant run in a professional televised tournament.

A mere two years passed and then Kai Fan Leung stepped onto the scene, qualifying for the World Championship at Alexandra Palace and afterwards stealing MacKenzie’s position in the Hong Kong pairing.

Lam held a PDC tour card as he partnered Leung. Now, the tables have turned, with the latter having earned his maiden season on the professional circuit, after coming through the gruelling, intense Qualifying School in January.

For the aspirant professional player, Q School is the destination where dreams become a reality. Four days of knackering arrows being thrown and often hopes being scuppered.

Leung, 36, produced some blistering performances, averaging over 107 on two occasions, and needing only two days of play to seal his coveted tour card, denying Lisa Ashton in the decider.

“I thought it was amazing,” he said. “With the record-breaking entries of players, I managed to qualify on the second day outright.

“My first day, I hit two 107 averages. Many friends gave me a lot of encouragement, but missing three darts to proceed, stopping at the last 64. Still any day could be very different, it depends on who you played and the way you played. I am just so glad I manage to get through eventually.”

The Hongkonger was the man to deny Lisa Ashton a place in the history books. Four-time women’s world champion Ashton was vying to become the first woman to win a tour card outright on the Friday at Q School, though, a flourishing Leung pinned checkouts of 140 and 104 during a tantalising triumph.

Eventually, Ashton did make the headlines as she secured her place on the professional circuit via the Order of Merit.

“After I won in the quarter-finals, I knew Damon Heta was still in. I thought I would play him, but then after I knew I was going to play Lisa, that felt a bit of awkward,” Leung admitted.

“In the meantime, I really wished she could make it happen as the first woman to obtain a tour card [through Qualifying School], that would be wonderful.

“On the other hand, I wished I could get on to the professional circuit as well. Many people backed her during our game obviously, that’s very normal.

“I thought it was an interesting game to win 5-4 in the deciding leg. The nerves also come into your body, knowing that that was the last game of the day.

“She really deserved to win a tour card eventually, particularly as she was so close last year. You can feel the fighting spirit, the calmness and the steadiness – all the good elements can be found in her game.

“I wanted to congratulate her of course for becoming the first woman to obtain a tour card against us men. It came to happen in Hong Kong with Ng On Yee, previously world number one ladies snooker player – who attempted Q School as well, but failed.

“I guess it was so hard to win a tour card amongst the men’s field. The only thing to say I guess is to congratulate Lisa on her wonderful performance at Q School and wish her to succeed in the coming two years.”

Both Lam and Japan’s Haruki Muramatsu have been of Asian descent and claimed PDC tour cards in the past, though, neither utilised their possessions to their advantage. However Leung had a vision beforehand, and executed that perception to perfection.

He added: “Before heading to Q School, I checked the PDC darts calendar for 2020, both Challenge Tour and ProTour respectively, in order to see how many events I would be able to attend.

“Of course, the scheduling would be different for either tour. And luckily as I obtained the tour card, I checked the schedule and I would be able to make 90 per cent of the ProTour events this year if plans didn’t change.

“Hopefully, if plans didn’t change, mentally and financially, I can play most of the tour. But still, the travel to Asia for the World Soft Darts, and for Asian Tour are still there, I’ll see if I can manage to find a balance for so many different tours, but definitely my focus is in the ProTour for sure.”

Former long-distance runner, Leung, now resides in the North of England, spending the majority of his time either practising on the board, travelling to Barnsley or Wigan and competing amongst the sport’s elite. He has left his young daughter and wife back home in Hong Kong in order to provide them with a brighter, more prosperous future.

“Family – that will be a headache too. It still depends on how well I am going to do on the ProTour, then there will be chance for my family to move to the UK to stay with me as well.

“My daughter is only two-and-a-half years old, and I am going to miss my wife and daughter so much. To live the dream, I guess sacrifice has to be made. Hopefully, I can get myself ready, settle down all the daily issues and be ready to compete.”

His good friend and fellow countryman, Lam, played a minimal amount of events during his four years as a PDC tour card holder. ‘The Wolf’ became the first player from Hong Kong to join the professional ranks, whilst Leung is hoping to compete more regularly than his compatriot, and provide Asian darts with a flag-bearer.

“2017 was the first time I played Q School, and this year was my second attempt,” Leung said. “I still remembered the time I witnessed Royden winning his tour card on the second day.

“Then it happened to me this time. At the end of the day, every player strives to play their best and win the card. It represents a self-actualisation to test yourself and see how far you could go or reach.

“But then, now I have the entry ticket, I should at least try to make good use of it. Take this chance as a new adventure, a brand new start for me, for myself, for my family and also for the Asian darts community.”

Both Noel Malicdem and Seigo Asada reached the third round of the World Championship at Alexandra Palace in December, and both claimed the PDC Asian Tour has been catalyst to the standard of steel-tip darts on the continent significantly increasing.

Leung reached his maiden final last January in Seoul, South Korea, being defeated by the legendary Paul Lim in a one-sided final, though, ‘Fat Beauty’ has also praised the introduction of the Asian Tour system.

He said: “It’s been two years from now. It does help a lot for those who wished to participate in more steel-tip tournaments. Before that, I represented [Hong Kong] once in the World Championship through the North East Asia qualifier and that would be the only chance.

“With a more proper and transparent mechanism for the selection of the PDC World Cup of Darts and World Championship, it attracts more players to practice hard and compete on the PDC Asian Tour in order to represent their countries.”

The Asian Tour has been significantly affected by the ongoing coronavirus thus far this year, with the opening two stages, in Japan and South Korea, being postponed until further notice.

Another popular Asian tournament, Super Darts, has also been postponed. Leung had qualified for the prestigious soft-tip tournament for the first time, and was set to join the likes of Phil Taylor and Paul Lim in Japan.

He was going to return to South East Asia and therefore skip two Players Championship events in order to participate with roughly £69,000 being placed in the winner’s bank account.

“It is inevitable [that its had to be postponed] as we’ve seen many big events in Asia stopped, including sports events, due to the spread of coronavirus.

“It is a wise choice to postpone Super Darts, and I hope it won’t affect much of the Tokyo Olympics, plus the PDC Asian Tour this year. But now I can concentrate on the ProTour – I’m now back in Players Championships Seven and Eight and the European Tour qualifiers.”

Leung has already played six Players Championship events since winning his tour card, with his furthest run to the third round equalling the deepest of his countryman Lam.

He was also left delighted earlier this month as he secured his place at the inaugural Belgium Darts Championship, defeating Ross Smith whilst recording a scintillating 103.6 average and subsequently Steve Brown.

“Well, it is great,” he said after sealing qualification. “As a new joiner to the tour and to be able to qualify for a European Tour event, but it was sad that I fell short in the second qualifying event for Germany’s [European Darts Grand Prix].

“I love Belgium. I’ve been there once last summer in June for the PDC World Cup of Darts. The Grand-Place of Brussels is one of my favourite places. I am still wearing the ring I bought from there. Also, I’m looking forward to my first individual walk-on too.”

A slice of history will also be carved by the reigning two-time Hong Kong Open champion as he becomes the first Asian player to step foot on the European Tour stage.

“I haven’t thought too much about this,” he acknowledged. “It’s always good to have new faces appearing in different darts venues. Now I just to need to keep practising, play well and be competitive enough to compete on the ProTour and the European Tour.”

Scott MacKenzie – whose World Cup of Darts position he had earlier snatched – was amongst those to wish him luck ahead of his European Tour debut via social media.