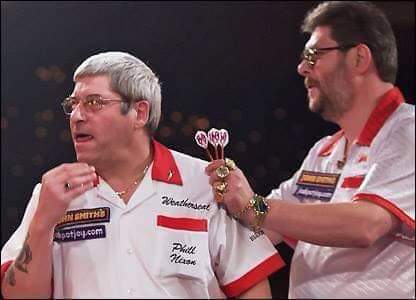 Sporting comebacks are always memorable. Liverpool overturned a 3-0 deficit to reach the Champions League final, beating Barcelona 4-0 in May. Dennis Taylor beat Steve Davis in the 1985 Snooker World Championship on the black ball to win 18-17 having been 8-0 down.

Cue, if you’ll pardon the pun, Phillip Nixon, from Ferryhill in County Durham, who almost had a fairytale ending to the 2007 BDO Darts World Championship. Suzanne Nixon, Phill’s wife, takes us back to when their paths first crossed.

“Phil had turned 18, my parents owned a local pub. He told me that he remembered little Suzanne running around the bar in her nappies aged four,” Suzanne said, whilst laughing. “I didn’t though as I was four, not four months!”

The Nixon’s home, is furnished with many a trophy. A large silver cup adorns her coffee table, the last name engraved is ‘2018 Suzanne Nixon (130)’. Her late husbands’ name is there also, ‘2007 Phill Nixon (146)’. These are the highest checkouts for ‘The Eldon Arms Pub’.

The Nixon family is awash with darts players, Suzanne is a former county and Super League player and her sons and granddaughters also throw tungsten.

“Qualifying for Lakeside was heartbreaking and horrific to watch sometimes, having missed out narrowly on many occasions,” Suzanne reminisces. “The last match before Phill qualified in 2007, he said that he had wished his mother – who had passed away fifteen months earlier – could have seen him play. He narrowly missed three nine-darters. Even throwing his darts blindfolded and backwards he wouldn’t have missed that day!”

“Phill loved his darts pure and simple,” Suzanne says with a tear in her eye. “He started playing darts in 1976 and then for County Durham in 1986. When Phill had played his 200th game he had won three-quarters of them. We had a house fire in 2004 and quite a few of his trophies were damaged and couldn’t be saved.”

The Nixon’s journey to Frimley Green, Surrey, was intense in more ways than one. “We took a London bus from Durham, two train rides and a taxi,” Suzanne remarked. “Almost twelve hours in total.”

“As soon as Phill qualified, we wanted to stay the full 10 days no matter what happened. We beg, stole and borrowed to pay for it all as we might never have ventured there again. It was a dream come true,” Suzanne said.

Phill Nixon, “The Ferryhill Flyer” was a nickname bestowed upon him by Tony Green – Jim Bowen’s sidekick on Bullseye – a popular ITV darts quiz show. But it was the BBC who almost put a dampener on proceedings before Phill’s first match that year. Suzanne recalls: “There was a knock on our hotel room door and it was representative of the BBC who said that Phill’s walk-on song was not a crowd pleaser. It was ‘We Will Rock You’ by Queen. We are both huge fans but they asked us to change it more than once. We held our ground.” A victory for the Nixon’s even before Phill had taken to the stage.

Prior to reaching the final, Phill had beaten his good friend and seventh seed, Darryl Fitton, followed by Martin Atkins, Paul Hanvidge, and Niels de Ruiter to set up a clash with the world number one, Martin Adams. “That didn’t surprise Phill at all,” Suzanne said. “He was going there to win it, he was the 150/1 outsider but that didn’t worry him.”

Martin stood between Phill and the Lakeside trophy. Jelle Klaasen was the youngest ever champion the previous year in 2006, aged 21. Adams and Nixon were both fifty, who would be the eldest?

Suzanne continues: “At the break, I went into the players room to talk to Phill and offer him some words of encouragement. He had a pint in hand, smoking a cigarette whilst hurling darts with some force into the dartboard. Another pint was swiftly consumed. Phill then rammed all three darts into his leg to wake himself up, I said just to play your own game and don’t make this fantastic week forgotten about. You can do it.”

Suzanne’s words did the trick and the second half didn’t disappoint. I show Suzanne a video of the final, as she chuckled away to herself: “I’ve only watched it five times and even then I have to skip to the second half.”

Wolfie was now the hunted and not the hunter. Phill took out 112 to secure the seventh set and that fabled whitewash was no more. The weight seemed to lift from Phill’s shoulders and he played with determination and a smile appeared like a Cheshire cat. 6-1 became 6-2, 6-3 then 6-4. The Lakeside crowd were going wild. “I felt at that moment that Phill was going to win. The whole room changed and total strangers were lifting me up in the air,” Suzanne recalls.

Phill was buzzing and literally flying, 6-5 became 6-6 with a sixty-four checkout. Phill was on cloud nine, Suzanne was in hysterics but Wolfie was in shock, sweating and in total bewilderment.

But the world number one kept his composure and secured the title with double top after almost two hours to complete a truly remarkable final.

The legend that is Phill Nixon sadly passed away from cancer in August 2013, aged just 57, having been diagnosed in June. He was a fighter both on and off the oche, a loving husband and father. It’s not the winning by or losing, it’s how you play the game.

With tears in her eyes, Suzanne finds the words that sums up her late husband, Nixy. “Phill had a passion for darts, he loved to see others doing well and on the eve of the 2007 final Phill said to me: “I couldn’t have done this without you Suzanne.” Legend.