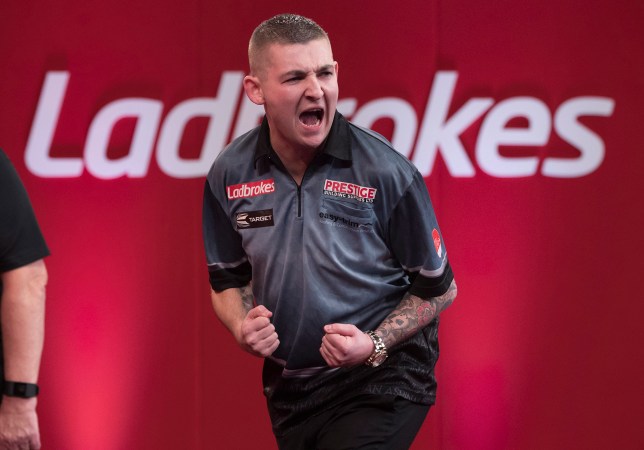 Aspinall averaged 101 and hit seven of his 13 darts at double to inflict a rare defeat on the World Number One.

Elsewhere, Glen Durrant is the new leader in the wake of MVG’s loss as he beat Gary Anderson 7-4 with a convincing display.

Gerwyn Price drew his third consecutive game, this time Daryl Gurney was involved in the stalemate, whilst Peter Wright and Michael Smith picked up wins in the opening two games of the evening.

The night in the Welsh capital belonged to the Lancastrian Aspinall as he downed the five time Premier League winner.

The first two legs went with throw before the Asp broke in the third to go 2-1 up, he would go on and subsequently hold to open up a two leg gap to MVG.

Despite firing back in leg five, Aspinall then made it 4-2, just two legs away from a guaranteed point.

But, the World number one fought back to reel off two consecutive legs to make it 4-4 before winning leg nine to make it 5-4.

The Asp recovered from that bodyblow to level the game back up at 5-5 before then kicking towards the line.

He would find himself 6-5 up after van Gerwen missed two darts to regain control, before pinning tops to secure a minimum of a point from Mighty Mike.

However, a matter of throws later things got a whole lot better for Aspinall as he hit 165 to set up tops, which was dually hit to seal a statement win to the rest of the Premier League field.

Elsewhere, Glen Durrant won the battle of former World Champions as he dominated his game with Gary Anderson to end the night.

Durrant raced into a 3-0 and 5-1 lead before a mini revival from the Flying Scotsman.

Anderson managed to bring the game back to 6-4 before Duzza went on to win the game with a 64 checkout on double 8.

Wright averaged 101 against an out of sorts Cross with a 50% checkout ratio to move himself on the cusp of the play-offs whilst Voltage now sits seventh in the league.

Gerwyn Price boasts one of only two unbeaten records, but is yet to win as he drew his third consecutive game 6-6, this time it was Daryl Gurney who he shared the point with as the pair still find themselves searching for their first wins in the 2020 Premier League.

Being a contender was a dream come true for Johnny Clayton, but he endured a nightmare on the Oche as Michael Smith reeled off seven straight legs with finishes of 167 and 142 to beat the Ferret 7-1 on his one off cameo.