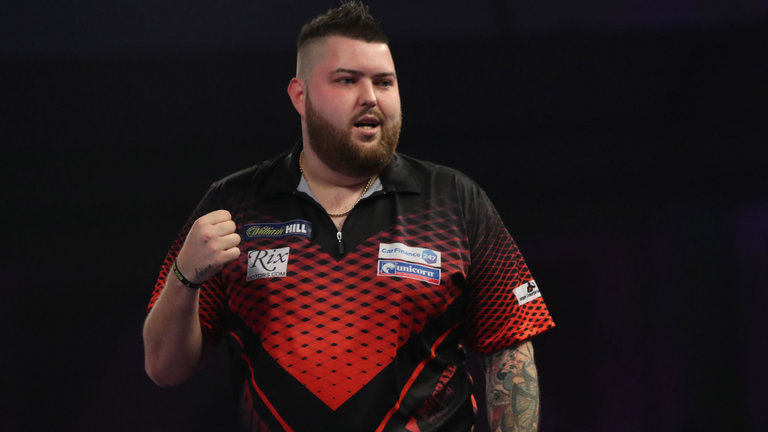 And Smith Must Score!

As this is a darts website, let’s not keep you too long reading lists of FA Cup shocks, but take a moment at least to remember Sutton United vs Coventry City, Wrexham vs Arsenal and more recently, Wigan beating Man City. Three times.

What I hope to do however, is keep you reading for at least a few more minutes while we look into the wider implications of another big upset last night, with Stephen Bunting beating Michael Smith 6-0.

Much had been said (partly by myself) of Smith’s credentials and chances of making the World Cup team ahead of Chisnall, something which you know I would have fully supported.

By now it is all academic, and good luck to Cross and Chisnall who could easily win the tournament. Few expect the Netherlands not to win, but few expected Sutton Utd to beat Coventry, etc. MVG is practically unbeatable at his best but RVB isn’t, and it takes two players to be on song to win this major event.

Michael Smith has had a fantastic season and we know from some of his own tweets that he has dashed around Europe – via airports in the middle of the night – taking on and beating the best of the rest, amassing ranking points and titles worthy of his talents. As I have said, he is the second best player in the world at the moment, on form, and came so close to making the team alongside the World Champion, about whose place on the team there can be no debate. They would have taken some beating!

It wasn’t to be, but we can’t read too much into his defeat last night. Bad day at the office – nothing more than that. Tired, missing his family, one eye on the World Cup, perhaps a bit nervous with so much riding on it, and up against an inspired Stephen Bunting who said after the game he is playing better than ever. Sometimes it just doesn’t happen. One defeat proves (or disproves) nothing.

But if we look beyond this bad result, what we still see is a player with the potential to get to World No 2 within a few years and claim not only the second, but the first World Cup spot on merit, what we would call an undisputed pick.

I am not saying all this just because he shared one of my articles on Twitter last night, although that is good for a writer and I thank him for doing so. No, there’s more to it. I honestly think that Bully Boy has the raw talent and dedication to stay at the top of the sport for a decade or more, regardless of whether he loses occasional games to zero against lower ranked players. He was outplayed by MVG twice in the Prem and barely anything was said, but because the Dutch Masters was his last chance regarding the World Cup, and because it was a player who has not had nearly the amount of success in the PDC that he has, people make more of it.

Anybody who knows and plays darts, which is probably everybody reading this, will recognise that he has that natural ability shared by masters across many sports that some consider a sign of mastery – he makes it look so easy.

So there we have it, this time at least he won’t be representing England and we can live with that. We all knew the selection criteria a long time ago and it would be wrong to change it at the last minute.

But consider, if darts were football, and there were a sole manager picking a team, choosing players based on how well they are playing now, and how well he feels they can respond to the challenge of playing not just for yourself but for your country, Michael Smith would be as much an automatic choice as Harry Kane – and this for the same reasons!

Yet again, if darts were football, I would be supporting some player ranked 94 because I was born in his town or something.

Best of British to Cross and Chisnall, and of course to any nation taking part. Darts fans are not so partisan as in other sports, and it is great to see so many countries in the competition.