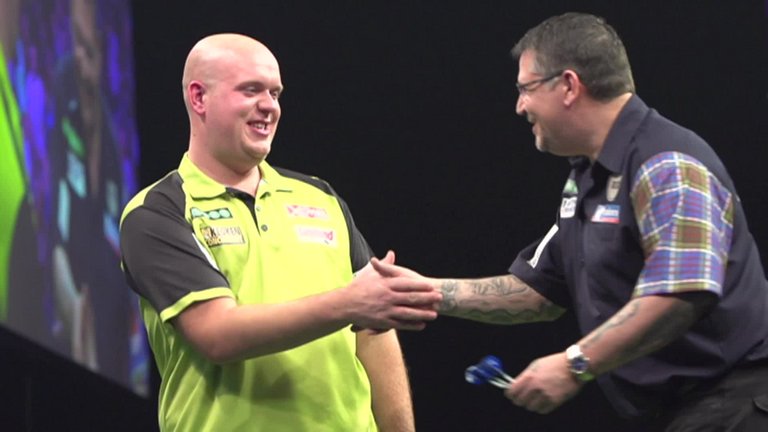 The final two quarter-finals of the 2018 Grand Slam of Darts saw the two expected winners progress to the final day of action at Aldersley Leisure Village, although they did it in very different ways.

Gary Anderson was clinical on the doubles and solid on the scoring and after losing the first two legs to German debutant Michael Unterbuchner, he won the next seven helping him to a 7-3 lead at the second interval. The highlight of that opening passage of play was a 152 checkout from ‘The Flying Scotsman’, his highest of the tournament so far. The quality stepped up a notch after the interval with the first four legs all win in five visits to the board or less, but it was Anderson who won three of them to move closer to the last four with a scoreline of 10-4. Checkouts of 68 and 31 saw him move within touching distance, although a 160 finish and a 12-darter from Unterbuchner kept him in with a shout.

He would only win one more leg, but he can be very proud of his efforts at his first appearance at the Grand Slam, and I’m sure we’ll see a lot more of him at this event and the other biggies whether it be as a BDO or a PDC player. For Anderson, though, he is into his sixth semi-final in Wolverhampton after a 16-6 success. How ironic would it be, after all those near-misses at this tournament, that he would win it in the one year when it’s not at the Civic? The former venue of the Grand Slam is one of the main reason why this is Anderson’s favourite tournament, and he certainly has a great chance of going all the way this time around although he does have three-time defending champion Michael van Gerwen standing in his way.

Talking of the world number one, he was also in action on Saturday night in another rematch from the group phase. Anderson v Unterbuchner saw the same result, but MVG would’ve been hoping for a different result this time around as Jonny Clayton denied an astronomical average from Van Gerwen at times on his way to winning Group A. The quality from that match carried over into the opening stages of this one as they both hit a 12-darter in the first six legs, which were shared to make it 3-3. A brilliant 142 checkout from ‘The Ferret’ put him ahead for the second time in the match at 4-3, but a 124 in reply from ‘Mighty Mike’ levelled things up once more.

Van Gerwen’s quality didn’t relent but Clayton’s did ever so slightly in the third session, allowing the world number one to move 8-5 ahead. However, the Welshman wouldn’t lie down and won three legs with 38 darts, not missing a double in any of them to restore the possibility of ‘The Ferret’ beating MVG twice in a week. The game carried on with its close nature as the pair shared the next six legs to reach 11 apiece. From there, Van Gerwen found another gear as he so often does with back-to-back 11-darters helping him on his way to a surely unassailable 15-11 advantage. After the Dutchman missed eight match darts, Clayton broke throw in 21 darts to stay alive with the advantage in the 28th leg.

However, it was then his turn to miss multiple vital darts, five to be precise, and MVG stepped in with a 66 checkout to progress to the semi-finals 12-6. Not quite on the drama levels of Friday’s Whitlock v Price match, but still a brilliant game and one for Jonny Clayton to be proud of as his impressive run in Wolverhampton came to an end. It certainly bodes well for him going into the Players Championship Finals as he looks to go one better than his runner-up spot in 2017.

All that means that Sunday’s bumper day includes the two semi-finals in the afternoon before the showpiece final in the evening with £110,000 on offer. Assuming it’s the same qualification criteria, the two finalists will also secure a place in next year’s event, which should be back at the Civic. Elsewhere in the darting world this weekend, Anastasia Dobromyslova secured her place at Ally Pally at the Ladies Rest of World Qualifier in Düsseldorf. Two more will join her on Sunday at the German Superleague Final and also at the African Qualifier. However, all eyes will be on Aldersley Leisure Village with two dramatic semi-finals and one final to look forward to. With the winner having to come through two best-of-31 matches in one day, perhaps the holder of The Eric Bristow Trophy will be the one who can conserve the most energy throughout a surely thrilling final day of action.