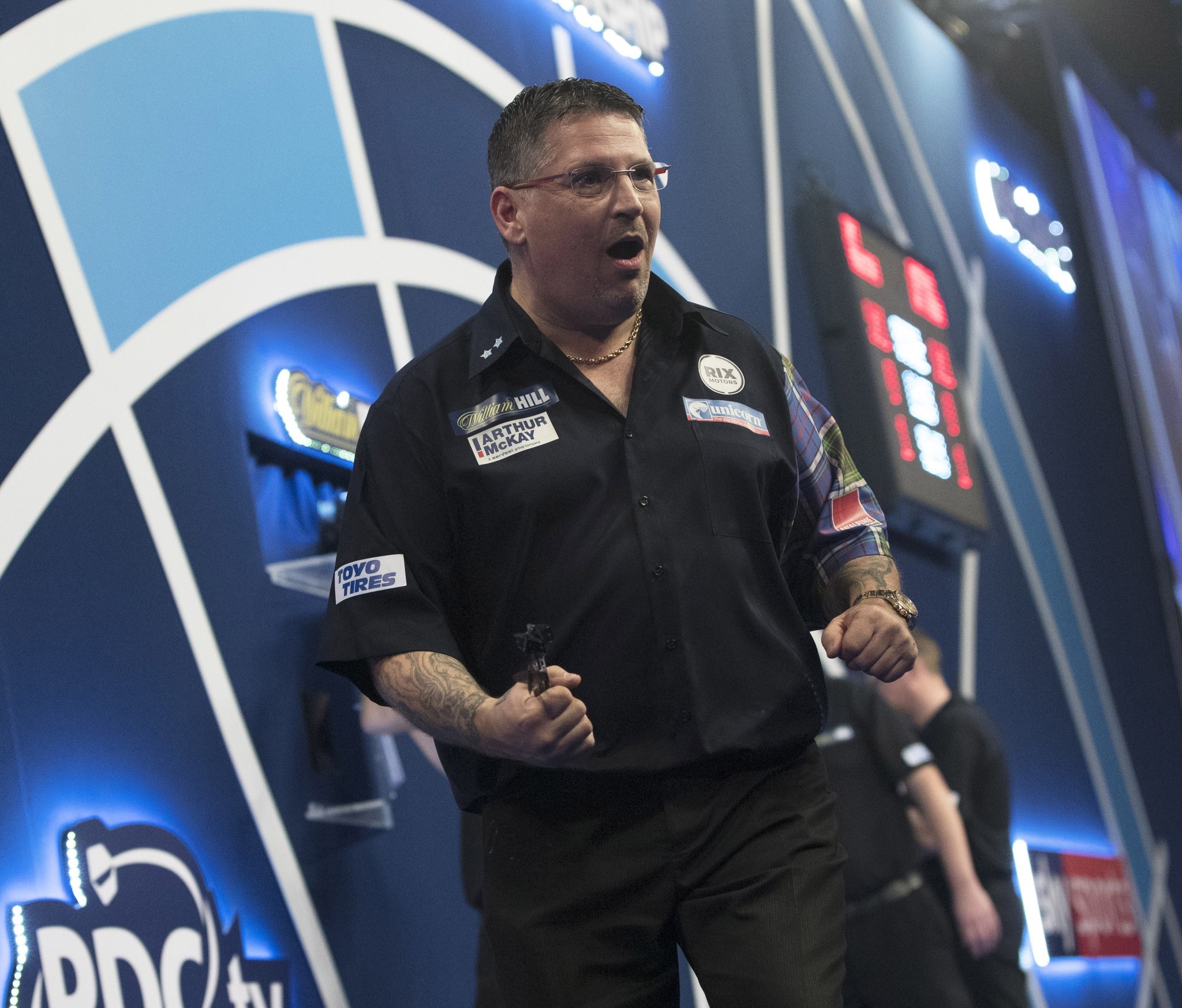 Anderson comes through thriller with Wattimena while van Gerwen breezes through

Gary Anderson came through a thrilling affair with Jermaine Wattimena as Michael van Gerwen breezed through and Ryan Searle booked his fourth round place on debut.

Gary Anderson survived a scare on Saturday evening as he came from 1-0 down to eventually see off Jermaine Wattimena in a deciding set.

Anderson – who could potentially meet Michael van Gerwen in the semi-finals – was forced to survive a match dart at the bullseye from an inspired Wattimena, but closed out a narrow victory to reach the fourth round at Alexandra Palace.

Both made flying starts; hitting maximums for fun. It was Wattimena who took the opening leg courtesy of a scintillating 142 checkout. The Dutchman went on to narrowly grasp the opening set 3-2; hitting a rare 21-dart leg to gain a 1-0 advantage.

Anderson fought back as he fired in two maximums and a 110 checkout en route to levelling up the clash before hitting double 10 twice to move 2-0 up in set three and lead in the match for the first time. A 117 checkout for Wattimena decreased the deficit, only for Anderson to hit a 14-darter to close out the set and race into a 2-1 lead.

‘The Machine Gun’ came from behind to send set four to a deciding leg, only to see his chance scuppered by his missed dart at the bullseye and Anderson pinning tops with one dart in hand. Wattimena completed a stunning set of darts, as he hit 14, 15 and 11 dart legs to win his second set of the match, reduce Anderson’s lead and keep his hopes of a historic win alive.

Anderson squandered five darts for the match in the following set as Wattimena battled back from 2-0 down to hit a 71 checkout and send the match to a deserved deciding set.

Wattimena had the throw in the deciding set and held it well; hitting a 104 checkout to go 3-2 up, only for three missed darts at the bullseye for 170 checkouts, including one for match, to cost the Dutchman. Anderson pinned a 68 checkout on double two to close out a narrow victory on his birthday.

‘The Flying Scotsman’ will face either Vincent van der Voort or Chris Dobey in the fourth round as he sets sight on a third World Championship title.

Michael van Gerwen sealed his spot in the fourth round following a convincing 4-1 win over Max Hopp at Alexandra Palace.

Van Gerwen – who experienced some unsavoury scenes before his 3-0 win over Alan Tabern in the second round – put that behind him as he breezed to a comfortable victory.

‘Mighty Mike’ blitzed the opening set as he whitewashed a below-par Max Hopp with an average of over 110. All three legs were won on a different double for the Dutchman but all had the same effect as two 13 darters and a 14-dart leg handed him a 1-0 lead.

German number one, Hopp, got off the mark, but it proved to be a meaningless leg as van Gerwen won three consecutive legs to double his advantage.

It was a second set whitewash for ‘Mighty Mike’ in set three as he pinned finishes of 122 and 170 to open up a 3-0 lead and move on the verge of easing into round four. The 170 outshot for van Gerwen was the fifth he’d hit at the World Championship in five years.

Hopp got the German predominant crowd roaring once again with a 148 checkout to get his first set on the board. It was a terrific leg of darts for the ‘Maximiser’ as he finished it up in just 43 darts.

The Idstein-based ace continued his winning streak as he opened up a 2-0 lead, only for van Gerwen to send the set to a decider due to a missed dart at double 14 from Hopp – for yet another 148 outshot.

Van Gerwen punished the German; hitting double ten to close out a comfortable 4-1 victory. Two-time world champion, van Gerwen, will face either Adrian Lewis or Darius Labanauskas – who will take to the stage on Sunday evening.

Ryan Searle booked his place in the World Darts Championship fourth round on his debut following a 4-1 win over a distraught William O’Connor.

Searle, who only won his tour card to enable him to play on the Pro Tour just over two years ago, eased to an emphatic win at Alexandra Palace; hitting four maximums and an average of just below the 90 mark en route to victory.

He took the opening leg of the match, but three consecutive legs for Ireland’s O’Connor handed him the opening set and a 1-0 advantage.

European Darts Matchplay finalist, O’Connor, produced a magnificent 103 outshot to go within two legs of a 2-0 lead, only for Searle to take out 15, 13 and 16 dart legs in succession to level up proceedings.

Searle opened up a 2-0 lead in the third set, though, O’Connor battled back and sent the set to a decider. The Devon-based ace wired the bullseye and handed O’Connor a shot at a 103 checkout – which he had already pinned earlier in the clash. The Irishman wasted the opportunity, with Searle converting double eight to move 2-1 ahead.

O’Connor was left distraught with himself after squandering various chances at the outer ring, with Searle punishing the Irishman’s errors and gaining a two set advantage; moving on the verge of a last 16 place on his World Championship debut.

More missed opportunities for O’Connor handed Searle a chance for the match after taking a 2-0 lead. After missing a dart at double eight to convert a 133 checkout, Searle landed double two to close out a 4-1 victory.

It really has been a dream World Championship debut for Devon’s Ryan Searle and he will face either Michael Smith or John Henderson in the fourth round. We

The World Darts Championship will resume on Sunday with Adrian Lewis, James Wade and Vincent van der Voort all in action.

Searle shocks Suljović on thrilling day at the Palace