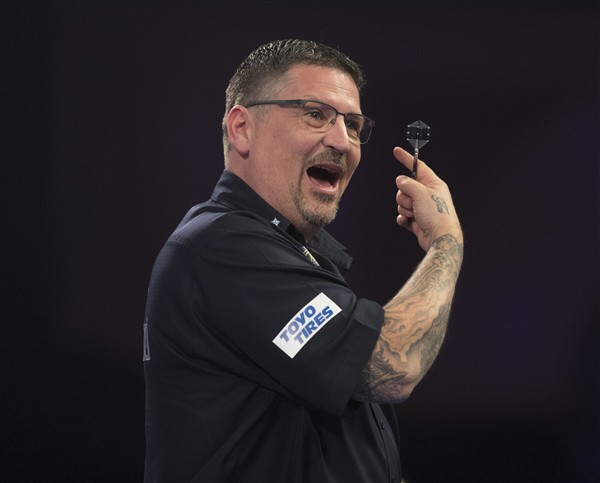 Gary Anderson returned to winning ways on Saturday as he defeated Jeff Smith to win Players Championship 1 at the Barnsley Metrdome.

Anderson, who made a winning return to the Unibet Premier League on Thursday, lifted his first individual title for almost two years, producing some scintillating showings across the opening day of the PDC ProTour season.

‘The Flying Scotsman’ got his victorious campaign underway with a blistering 107.4 average in overcoming German youngster Christian Bunse, before pulling off a 6-1 demolition of Simon Whitlock.

Premier League stars Gerwyn Price and Rob Cross were subsequently brushed aside by a rampant Anderson – who once again recorded ton-plus averages in booking his place in the quarter-finals.

Joe Cullen was also on the wrong end of a clinical masterclass from the two-time world champion, as was Adrian Lewis, with Anderson sealing his place in the decider with relative ease.

The final was a rather one-sided affair, with Anderson having owned the advantage throughout. The Scotsman averaged around 98 and produced what was needed to overcome the Canadian who was making his PDC return in Barnsley.

“It’s been a while since I won something, but I’ve got the hunger back,” Anderson told pdc.tv following his triumph.

“I want to get back to how I was throwing before [injury]. I don’t mind if I win or lose, but as long as I throw them how I used to then I’ll be alright. I still have work to do, but it’s not a bad start.”

As for Canada’s Smith, he embarked on a somewhat surprise run to the final, having recently regained his PDC tour card at Qualifying School in Wigan.

‘The Silencer’ had defeated the likes of Dave Chisnall, Nathan Aspinall and the reigning world champion Peter Wright leading up to the semi-finals – where he convincingly saw off Northern Ireland’s Brendan Dolan.

Dolan, who lifted two titles in a resurgent previous ProTour campaign, was the conquerer of both world number one Michael van Gerwen and four-time women’s world champion Lisa Ashton earlier in the tournament.

Elsewhere, Mickey Mansell became the first player to hit a nine-darter on the ProTour this decade during his first round win over Nathan Derry. His impressive feat was later matched by Dutchman Mike van Duivenbode in the same round.

128 players will be vying for success once again on Sunday in Barnsley as the Players Championship series resumes. The only change from Saturday’s field sees Scott Mitchell being replaced by Rob Collins – who make his highly-anticipated PDC ProTour debut.

Click here for full results from Players Championship 1 in Barnsley