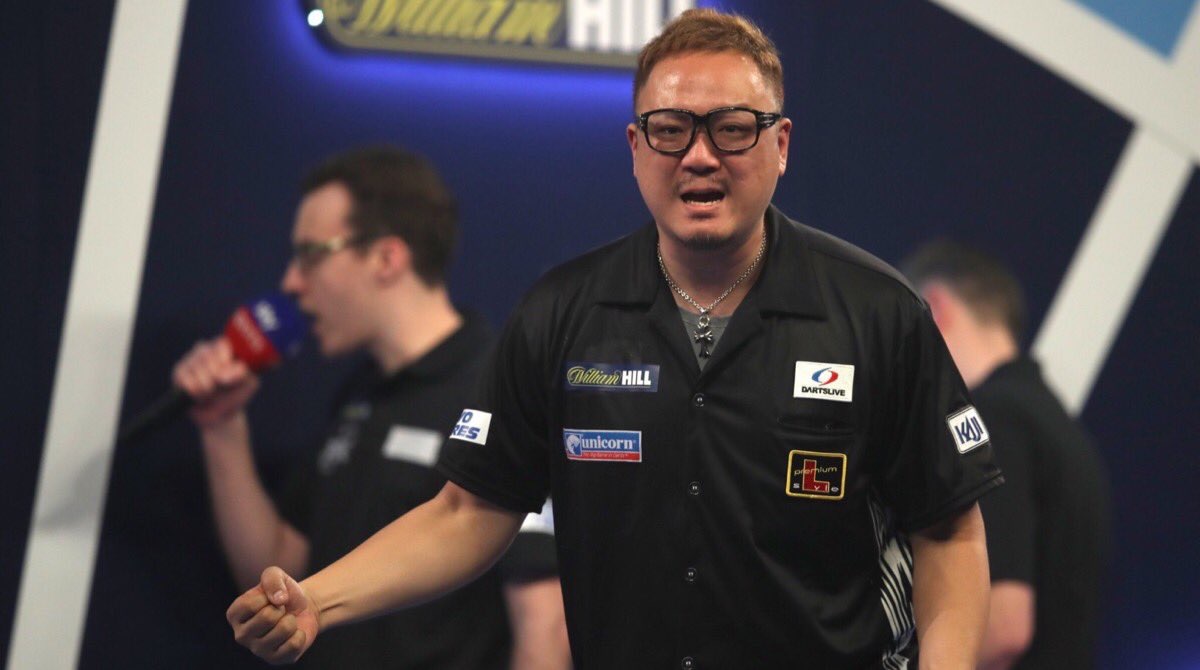 Poland’s Ratajski – who won three Pro Tour events this year without having a tour card – endured a agonising defeat at the hands of Seigo Asada at the first hurdle of his second World Darts Championship.

Japan’s Asada stated in an exclusive pre-tournament interview with dartsplanet.tv that he wanted to ‘test’ Ratajski and certainly did that, as he battled back from 2-0 down to prevail in a close encounter with the former Winmau World Masters winner.

Both players were making their second appearance at Alexandra Palace and both were also looking for their first win on the World Darts Championship stage, but it was Ratajski who raced out of the gates; hitting a 76 checkout to gain a 2-0 advantage on the ‘Ninja’.

Asada reduced the deficit with a 121 outshot before pinning tops to send the match the distance. Under the pressure of a second round spot being at stake, and after taking a 2-1 lead in the final set, the Japanese sensation hit a scintillating 11-darter to finalise a brilliant comeback, and end Ratajski’s hopes of a World Darts Championship run. Asada will take on James Wade in the second round.

Daryl Gurney secured his spot in the third round for a fourth successive year courtesy of a 3-0 win over Kent’s Ross Smith. The opening set saw Smith battle back from 2-0 down to take it to a decider, but a 14-dart leg from Gurney gave him the early advantage.

Gurney reeled off the next six legs without reply, landing six 180s to set up a meeting with Jamie Lewis in the third round.

Larsson took the opening set courtesy of a 125 checkout, only for Thornton to level the clash due to the Sweden World Cup representative squandering multiple darts at the outer ring.

Thornton opened up a 2-1 advantage in set three, and forced his opponent, Larsson, to battle back from behind – which he did successfully – hitting double 16 to close out an impressive win. Larsson will face Kim Huybretchs in the second round on Wednesday afternoon.

Rowby-John Rodriguez – who was making his fourth appearance at Alexandra Palace – finally managed to bag his first victory on the World Darts Championship stage as he defeated Ricky Evans 3-1 in London.

A 13 and a 15-dart leg helped Austria’s Rodriguez claim the opening set of the match before Evans pinned double eight to level up the affair. From there, it was virtually plain-sailing for Rodriguez – who pinned four maximums en route to a comfortable 3-1 win.

Purmerend-based Van der Voort dropped just one leg at the hands of an out-of-sorts Webster – who was being mentioned as a potential candidate for the 2019 Premier League prior to the tournament. The ‘Dutch Destroyer’ will face either Steve Beaton or Chris Dobey in what will be a mouth-watering clash.

Lennon pinned two maximums, a 112 outshot and dropped just four legs en route to an emphatic 3-0 win. The Irishman will take on an out of form Alan Norris in the second round, in a game that Lennon will fancy his chances in.

Ron Meulenkamp produced a mesmerising comeback as he fought back from 2-0 down to deny Diogo Portela – who was bidding to become the first Brazilian to win at Alexandra Palace.

The Brazilian made a flying start; whitewashing his Dutch opponent 3-0 in the opening set before back-to-back 14-darters ensured ‘Braziliant’ a 2-0 advantage.

From there, Meulenkamp flipped the switch as he hit legs of 13, 14 and 12 darts to reduce the advantage, before levelling up the tie courtesy of two maximums and a 55 outshot.

Portela was fighting for his life in the final set with Meulenkamp looking to close out an impressive comeback. After squandering eight darts at the outer ring, the Dutchman eventually closed out a 3-2 win on double three.

Dimitri van den Bergh booked his place in the second round of the World Darts Championship following a 3-0 win over CDC winner Chuck Puleo.

Puleo wasted multiple opportunities in the opening set with his Belgian opponent punishing and winning the first set 3-0 before doubling his lead in set two despite not reaching top gear. He then eventually closed out a 3-0 whitewashing; hitting tops to secure the victory.