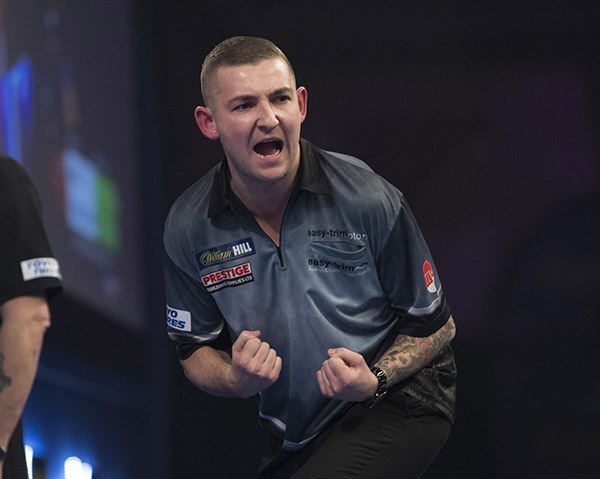 Nathan Aspinall carried on his fantastic recent run of form at the German Darts Championship in Hildesheim, averaging 104.5 and only missing one dart at double in his 6-1 win over Mike Holz, while Dimitri Van den Bergh reeled off four straight legs to knock out Steve Beaton 6-4.

Aspinall, the UK Open champion, had to wait until the last game of round one to get his European Tour season underway, but after losing the first leg to Host Nation Qualifier Holz, he burst into the form that saw him win in Minehead and reach the semi-finals of the World Championship. Consecutive bull checkouts followed by 114 and 121 put ‘The Asp’ 4-1 ahead, before closing out the game with two 13-darters to set up a mouth-watering last 32 meeting with Joe Cullen.

Mike Holz had the highest average of the six Germans involved in day one at Halle 39, but it was only enough for four darts at doubles as Aspinall run riot. It was a decent day for the home heroes on the whole, Kevin Knopf marking his Euro Tour debut with a win in an extremely scrappy affair with Scott Taylor. ‘The Button’ took an early 3-1 advantage, before former ProTour finalist Taylor found his best form, winning the next two legs in 25 darts to get back level.

However, missed doubles proved crucial as Knopf progressed despite an average of just 72, and now has the reward of facing two-time World Champion Adrian Lewis. Steffen Siepmann was much more convincing as he saw off Mickey Mansell 6-2 to move through to a winnable tie with Jermaine Wattimena. However, one of the leading lights of German darts, Gabriel Clemens, was upset by former World finalist Mark Dudbridge who plays Gerwyn Price in round two.

Maik Langendorf lost 6-3 to Mario Robbe in a first European Tour success for ‘The Dutch Robot’, while Jyhan Artut was whitewashed by a superb Boris Koltsov. The Russian averaged an incredible 117 for the first four legs, before a huge drop off saw it end up at 97. The most eye-catching tie of Friday’s action was almost undoubtedly Dimitri Van den Bergh’s meeting with Steve Beaton. The Belgian was involved in a superb Premier League game with James Wade on Wednesday, but didn’t have to produce anywhere near that level as he did for ‘The Bronzed Adonis’ 6-4 with an average of 92.4.

It was a day for the youngsters in Hildesheim as Luke Humphries had the second highest average of the day, easing part Leeds’ Martin Atkins 6-2. ‘The Assassin’ hit 100% of his double attempts but it wasn’t enough as World Championship semi-finalist Humphries progressed to a favourable tie against Darren Webster, which will kick off Saturday’s last 32 proceedings. Another big-name clash saw Ricky Evans meet Robert Thornton, which bizarrely was picked to be the third game of the tournament.

‘The Thorn’ was on form in the early reckonings, taking out 111 for a 3-1 advantage, but Evans turned the tables with stunning finishes of 167 and 132, eventually running out the 6-4 victor. There were also impressive displays from Jamie Hughes, who beat Tytus Kanik 6-4 in a high-quality encounter, Andrew Gilding, who saw off Belgian youngster Mike De Decker 6-3 in a ‘180-fest’, and Andy Boulton, who got revenge on Josh Payne for their meeting in this event last year, coming through in ten legs to set up a clash with Daryl Gurney.

Keegan Brown survived a scare from Madars Razma, the Latvian winning three consecutive legs to take it to a decider, but a brilliant 116 checkout from ‘The Needle’ was enough to set up a meeting with Michael van Gerwen. Strangely, the Isle of Wight’s Brown said after his win that ‘he’ll be happy to take a couple of legs off the world number one’. Tongue-in-cheek or not, it seemed a very questionable thing to see and will surely give MVG all the motivation he needs.

Recent UK Open quarter-finalist Simon Stevenson was victorious in the opening game of the tournament, beating Dave Prins 6-2, while Ron Meulenkamp’s doubles helped him get over the line against Finnish thrower Kim Viljanen. Finally, Diogo Portela’s second Euro Tour appearance ended in disappointment as Mervyn King came through 6-4 to secure a match-up with Dave Chisnall.

A real mixed bag on Friday in Hildesheim, with some great games and performances, and some attritional affairs, but it should go up a notch on Saturday when the likes of Michael van Gerwen and Rob Cross enter the fray. The home crowd will have Kevin Knopf and Steffen Siepmann to cheer on in the afternoon session, while the most intriguing clashes see a third meeting of 2019 between Ian White and Jamie Hughes, a clash between Mensur Suljović and Ricky Evans, and a Stephen Bunting looking to kick-start his season against Dimitri Van den Bergh.

Chisnall-King and Cullen-Aspinall should also get the pulse racing as the 2019 German Darts Championship from Halle 39 in Hildesheim continues on Saturday.