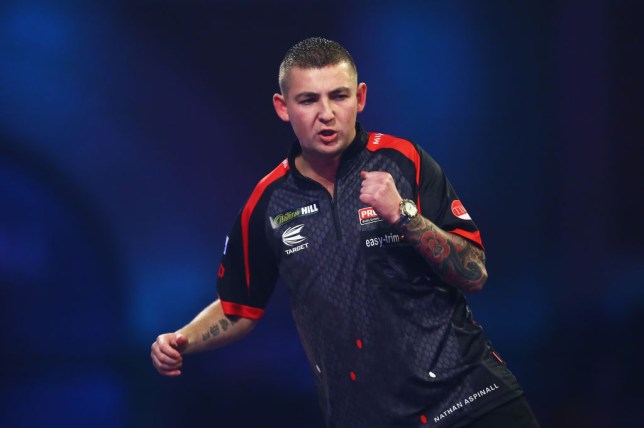 Nathan Aspinall hit a 170 checkout on his way to a narrow success in the second week of the PDC’s Darts at Home, despite ending his campaign with a 5-4 loss to an inspired Jelle Klaasen.

Aspinall followed in Devon Petersen’s footsteps to win the group on legs difference as wins in his first two matches against Steve Beaton and Stephen Bunting were enough to get him over the line.

The evening’s entertainment kicked off with a 5-3 win for the former UK Open champion over ‘The Bronzed Adonis’. Aspinall stormed into a 4-0 lead, before Beaton threatened an incredible turnaround but the world number seven sealed the points on double 12.

That display ended up as the highest average of the night, a 98.63. The next contest was a tale of missed doubles as Klaasen squandered chances in three separate legs that Bunting won, allowing the former BDO World Champion to win 5-2.

Bunting was back in action straight away, and ‘The Bullet’ came within a leg of back-to-back wins as he led Aspinall 3-2 but failed to score highly enough in a deciding leg, allowing the Stockport man to edge it 5-4.

The game between Beaton and Klaasen started a run of sensational finishing as a 156 from ‘The Cobra’ made it 3-3 before he incredibly denied Beaton the win with a 149 in the final leg after the Norfolk man missed two match darts.

Klaasen went one better against Aspinall in a similarly high-quality match, going four for four on doubles to lead 4-3. The match included a spell of four ton-plus finishes in the first six legs, but the Dutchman couldn’t close out the match and missed five for a 5-3 win.

However, with Aspinall on 164 in the decider, ‘The Cobra’ finished 150 to grab a second 5-4 success of the evening. It didn’t give him a chance of winning the group due to his inferior leg difference, but more positive signs as he continues to regain form and confidence.

So, it all came down to the final game of Group Two. Bunting knew any win would seal the title for him, while a win for Beaton would hand the title to Aspinall.

The first five legs all went with throw, before a superb 132 checkout from ‘The Bronzed Adonis’ on the unconventional route of Bull, T20, D11 gave him the chance to deny Bunting’s hopes of winning the group.

And he took the chance in style, an 85 finish enough to make Aspinall the champion in the second edition of Darts at Home. Amazingly, Bunting finished bottom of the group despite going into the final match with a chance to finish top.