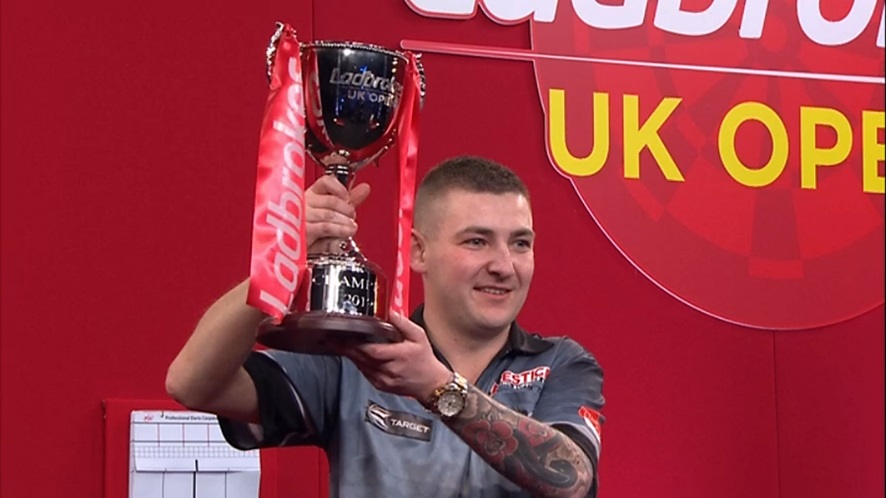 Nathan Aspinall is the new UK Open champion courtesy of an 11-5 victory over Rob Cross in the final, sealing victory with a brilliant 170 checkout for a place in the top 16 in the world after going into the weekend ranked 34th.

The Stockport thrower didn’t even have a PDC Tour Card eighteen months ago, and after winning his first PDC title in September last year, he qualified for his debut at the World Championship. We all know what a brilliant run he had there, making it to the semi-finals to move to the verge of the top 32 out of nowhere, which he has backed up with several solid runs on the ProTour at the start of this year, notably defeating Michael van Gerwen 6-1.

However, surely no one would have predicted his rise to continue in this style at the 2019 Ladbrokes UK Open at Butlin’s Minehead as ‘The Asp’ defeated another cinderella story in Rob Cross having already taken the scalps of in-form Gerwyn Price, Premier League contender Steve Lennon and former World Champion Christian Kist amongst others. Aspinall’s first major title sees him rise to 16th in the world, knocking Adrian Lewis out of the top 16 and Raymond van Barneveld out of the top 32.

It also sees him seal qualification for the Grand Slam and World Grand Prix as well as a likely seeding at the World Matchplay in July. The UK Open had already seen plenty of drama on Friday and Saturday – Michael van Gerwen, Gary Anderson and Peter Wright all going out on Friday night as seeds tumbled following BDO World Champion Glen Durrant’s surprise exit in the afternoon. Jamie Hughes made a big impression, while Scott Taylor got the furthest of the Riley’s qualifiers.

Saturday saw Gerwyn Price extend his unbeaten run to 19 matches, while Mensur Suljović, Daryl Gurney, James Wade and Michael van Gerwen’s scourge Mervyn King all crashed out. That set it all up for a thrilling finale on Sunday with a guaranteed new UK Open Champion – Michael Smith, Rob Cross and Gerwyn Price amongst the favourites.

The final day of action got underway with Cross up against Josh Payne, who’d already seen off the likes of Simon Whitlock and Kyle Anderson to reach his first televised quarter-final. It was the Hastings man who took the early advantage, leading 3-2 at the first break, but ‘The Maximum’ produced some high-quality stuff to level at four apiece, before two legs in 28 darts saw Cross secure the second session by the same scoreline.

Both players were averaging just under the ton and that standard continued into the back end of quarter-final 1 as ‘Voltage’ pinned his favourite double 18 for an 8-4 lead. The Gravesend thrower closed the gap to 8-6, but Cross proved too strong as the former World Champion ran out a 10-7 victor, averaging over 95. He didn’t yet know who he would meet in his first TV ranking semi-final since last year’s Premier League due to the open draw format, but up next it was Michael Smith and Steve Beaton.

‘The Bronzed Adonis’, who brilliantly saw off the returning Gary Anderson on Friday, came up against a wounded Smith after ‘The Bullyboy’ had surgery on an abscess in his groin just a few days prior, but it was the World Championship runner-up who drew first blood, averaging well over 100 for the first session as he took all of the first five legs. A rapid victory in the last 16 against Jermaine Wattimena seemed to have set the tone for his last eight match, with the St Helens man clinical on the doubles.

Beaton got his first leg to make it 6-1, but he couldn’t live with the world number six who ended with an average of just below 101 and a 10-1 success. That put him in with a great chance of finally securing a first major title, despite his horrific injury and regular visits to the local hospitals to prevent the wound from being infected. Giant killer Simon Stevenson faced man of the moment Gerwyn Price in the third quarter-final, and the early stages went with the form book as Price took a high-quality opening stanza 3-2.

‘The Mirror Man’ was continuing his fantastic doubling, though, and managed to win the next two legs to go in front. It was only short lived however – Price took out the latest of his reel of high finishes (a 164) to go 6-4 ahead. It was a very solid performance from ‘The Iceman’, who closed out the match comfortably to move into his second UK Open semi-final, sealing success 10-5 with an average of just over 100.

Just as Josh Payne and Simon Stevenson had already shown despite defeat, there was more great talent from the lower ranks to be shown in the final game of the afternoon as ‘Smudger’ Ross Smith took on World Championship semi-finalist Nathan Aspinall. The Kent man had already beaten Alan Norris, Steve West and James Wade in Minehead, but found Aspinall in inspired form, taking out 98, 90 and 121 in the first three legs to take a commanding lead.

The brilliant finishing continued after a quiet patch as Smith pinned a 125 to make it 6-2 before an Aspinall 170 and a Smith 132 in the closing stages put ‘The Asp’ one away at 9-6. A 13-darter in the final leg saw the former World Youth Championship runner-up into his second major semi-final in the space of three months with a 10-6 scoreline, averaging over 96. The draw for the semi-finals saw a repeat of the Ally Pally clash between Aspinall and Price, and a preview of Thursday’s Premier League meeting between Cross and Michael Smith.

They got underway with another great display from Nathan Aspinall, who surged into a 6-1 lead over Gerwyn Price. The Welshman couldn’t find any of the breaks he needed as his 20-game unbeaten run seemed to be slipping away with a series of holds after that electric start from ‘The Asp’. A 12-darter from Price made it 8-4, but when he finally broke in the fifteenth leg it was too late as a brilliant leg against throw, leaving 41 after 9 darts, was in vain after Aspinall took out 121 on the bull to go one away.

The Stockport man proceeded to complete the match, but not after yet more drama as the Grand Slam champion survived two match darts and punished Aspinall with an 11-darter, only to be broken straight back after missing one dart to send it all the way. Aspinall found double 14 to prove, if he hadn’t already, that his World Championship run wasn’t a fluke and to secure his first TV final and only his second in senior PDC darts.

The second semi-final was a similar affair in terms of quality with both players averaging in the mid 90s. Rob Cross found a 146 checkout in the very first leg against Michael Smith, which allowed him to go 3-0 ahead in double quick time. ‘The Bullyboy’ managed to get it back to 3-2, before ‘Voltage’ won the next three to make it 6-2. However, the game’s topsy-turvy nature continued as Smith went in 6-4 behind at the second interval.

A 127 checkout from Cross followed by some uncharacteristic missed doubles from Smith allowed the scoreline to be 10-5 at the third break. That meant the man who burst onto the scene at Butlin’s three years ago sealed a place in his first final there soon afterwards, eventually getting over the line at 11-7, averaging 94.23 with the most telling statistic Cross’ 55% on the checkouts compared to Smith’s 30%.

The scene was set for the first two Englishmen in a UK Open final since 2014 after Cross and Aspinall won 11 games between them over the weekend, sealing places at the Grand Slam in the process. The Hastings man got off to a flying start with a 12-dart opening salvo, but it quickly became very scrappy with missed doubles leading to a 3-2 advantage for ‘The Asp’. With his granddad cheering him on in the crowd, he surged into a bigger lead at 5-2.

However, after missing four darts to make it 6-2, many questioned whether that could be a turning point, but Cross missed six to go in level at the second interval. That turned out to be the real vital leg as Aspinall pinned double 10 to lead 6-4. A rare 12-darter got the gap back to one, but that would be the last leg that ‘Voltage’ won as young star Aspinall reeled off five straight legs to win the UK Open, finishing the job with his second 170 checkout of the weekend to seal the trophy and a cheque for £100,000 – the first player to benefit from the new prize fund at Butlin’s!

A brilliant tournament won by a worthy winner, and I think we can all agree how much better the UK Open was with a crowd in the venue and some proper main stage action – not forgetting some of the brilliant games over on stage two like Gerwyn Price v Jamie Hughes, Adrian Lewis v Jamie Lewis and Kirk Shepherd v Bradley Brooks. Shepherd’s ‘Brent’ dancing was also a highlight, but the 2019 UK Open will be remembered for Nathan Aspinall’s first major title despite a disappointing final which had the all-time lowest combined average for a regular PDC major final.

The main PDC tour has a rare break now before ProTour action in Barnsley in two weeks, although next weekend sees the start of the Development Tour, the return of the Nordic & Baltic Tour as well as the next batch of Eastern Europe Euro Tour qualifiers.

Heta and Bailey win yet another Tour Event in Queensland

Nathan Aspinall – Cashing In On His New Found Success