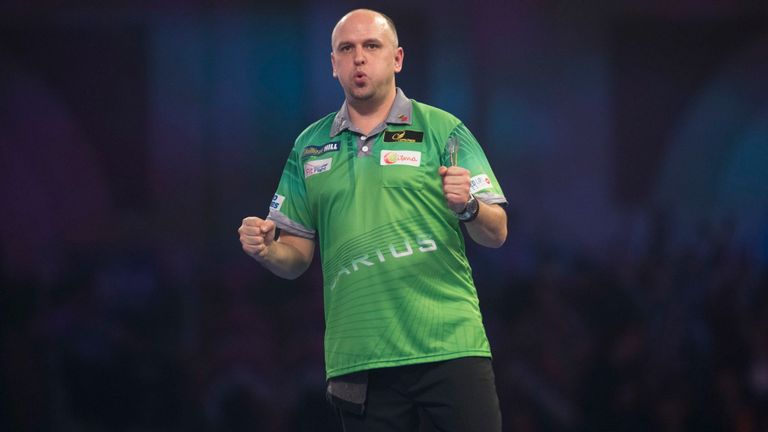 Darius Labanauskas produced the only 100+ average of the opening day of the 2019 Austrian Darts Open in Premstätten, near Graz.

The Lithuanian star, who reached the semi-finals in Barnsley on Wednesday, hit 3 maximums, 2 ton-plus checkouts and 43% of his doubles, which all added up to a 103.98 average and a 6-1 win over the second strongest Host Nation Qualifier, Michael Rasztovits. ‘Lucky D’ faces Ricky Evans in Saturday’s second round, which sees a first European Tour seeding berth for ‘Rapid’.

There were plenty of big names in action on the opening day. Stephen Bunting survived a mini-comeback from Euro Tour debutant Patrick van den Boogaard, while another former World Champion in Mark Webster had too much for Dirk van Duijvenbode and Steve Beaton saw off Mark Barilli 6-3. UK Open Champion Nathan Aspinall came through against Kim Huybrechts with a flattering 6-2 scoreline in what was a closer encounter than that suggests.

The biggest name of them all in the first round, five-time World Champion Raymond van Barneveld beat Mark Wilson 6-1 in a game where the Doncaster thrower could have easily chalked up more legs. That sets up a mouth-watering clash with home hero Mensur Suljović, which will be a stunning atmosphere if it’s anything like last year in Graz, especially if the size of the crowd is larger than Friday’s action.

Mervyn King progressed to round two after a ding-dong battle with ‘The African Warrior’, Devon Petersen, who was making his first European Tour appearance since 2017. Elsewhere, Jeffrey de Zwaan justified incredible odds of 1/250 to beat Austrian player Benjamin Fasching, winning that one 6-1, while Keegan Brown equalled the record for the most 180s in a first round Euro Tour match this year, with 8 in his 6-4 success over Conan Whitehead.

Boris Koltsov produced back-to-back 13-darters to see off Sweden’s Johan Engström in a deciding leg, with Steve Lennon following that match with a convincing 6-1 win over Jamie Bain. In this corresponding weekend last year, the Irishman lost to Michael van Gerwen in the final of the Dutch Darts Masters. On Saturday, they will meet again, but this time in Graz and in the second round.

Tytus Kanik’s reward for winning on the Euro Tour for the first time in over a year is a date with defending champion Jonny Clayton, while John Henderson survived a scrappy encounter with Ross Smith, a game which summed up Friday’s action with two in form players failing to produce anywhere near their best. One of the better games on day one saw Andrew Gilding race into a lead against Chris Dobey, particularly notable for Gilding’s incredible strength on throw.

However, he failed to close the match out, missing nine darts in total to progress, and Dobey punished him for a crucial victory in his quest to finally secure a World Matchplay debut. Diogo Portela has made a habit of coming through the sparsely-populated Associate Member Qualifiers, but once again he failed to win his first match on the stage as Ryan Searle did for him 6-1. ‘Heavy Metal’ will meet Adrian Lewis in one of six all-English ties in the second round.

Jamie Hughes was another qualifier who we had high expectations for, but he averaged below 80 in a 6-3 win over Patrick Tringler, a match which the Host Nation Qualifier could have easily taken to a deciding leg or even won altogether. Hughes should have to play much better to beat Ian White on Saturday, while Tringler’s defeat means that Mensur Suljović is the only remaining Austrian going into the last 32 in Graz.

The second round sees a tasty meeting between Rob Cross and Jeffrey de Zwaan as well as a crucial game in Michael Smith’s season, where he will probably have to beat Steve Beaton to be seeded for the Euro Tours in Zwolle and Copenhagen. Wade-King, Suljović-Van Barneveld, Price-Henderson and Chisnall-Aspinall are also potential classics while Jonny Clayton kicks off his title defence on a day where the 2019 Austrian Darts Open should ramp up a notch.

King and Puha deny Robb in a DPA Double