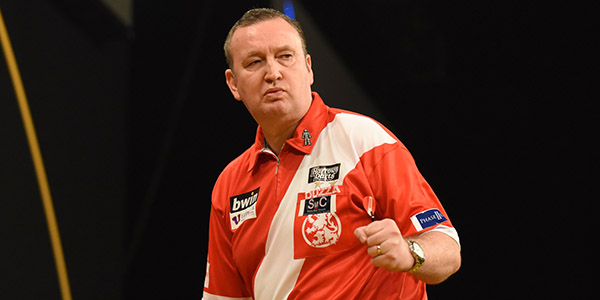 Glen Durrant got off to a flying start in Wolverhampton as Krzysztof Ratajski defeated Raymond van Barneveld in a close affair and Michael van Gerwen threw a trademark 112 average.

Van Gerwen, who has won just the Unibet Masters and the Unibet Premier League this year amongst the many televised major events, will be looking to clinch a fourth consecutive Grand Slam of Darts title after beating Peter Wright to the title 12 months ago at the Wolves Civic Hall. The Dutchman was handed a favourable group to say at the least, but, threw six maximums in a 5-1 thrashing of BDO ace Gary Robson. ‘Big Robbo’ has previously met van Gerwen at the Lakeside in 2007 when ‘Mighty Mike’ was favourite to win the tournament but had his chances scuppered by the Englishman.

The world number one will take on Jonny Clayton tomorrow evening after ‘The Ferret’ cruised to a 5-1 win over an out-of-sorts Joe Murnan despite a mediocre performance from the Welshman.

The reigning BDO World Champion and World Trophy champion Glen Durrant eased to a 5-1 victory over Australia’s number one Simon Whitlock, averaging 99 and hitting nine 140s in the process. ‘Duzza’ will face a former major runner-up in Gerwyn Price tomorrow after ‘The Iceman’ beat Andrew Gilding – who struggled on the outer ring in a scrappy affair.

Poland’s two-time PDC ranking title winner Krzysztof Ratajski got off a dream Grand Slam start as he defeated the 2012 champion Raymond van Barneveld 5-3, despite being far from his brilliant best. Ratajski, who has clinched three PDC titles since last year’s Winmau World Masters success, came from behind three times in a close encounter but converted five out of nine on the outer ring which was crucial in the outcome of the match.

‘The Polish Eagle’ will take on last week’s World Series Finals runner-up Michael Smith in what is set to be a fascinating Sunday evening match-up. Smith saw off the reigning Winmau World Master Adam Smith-Neale 5-3, though, the scoreline could have been different if it weren’t for both players enduring trouble with the doubles.

James Wade whitewashed Wesley Harms in his opening Grand Slam of Darts match as he sets sight on a third major crown in less than a month after winning both the World Series Finals and European Championships on the continent. ‘The Machine’ averaged just below the 100 mark and will face Keegan Brown tomorrow after the Isle of Wight-based ace came from behind to edge past Mark Webster in the opening game of the evening.

Despite ‘Muffin Man’ Steve Hine lobbing muffins into the Wolverhampton crowd, Ian White stole the show as he averaged just short of 105 in a scintillating showing from Stoke’s number one. White threw just the one maximum but a finishing masterclass in seeing off Hine – who is known to upset the world’s elite after stunning Peter Wright in Minehead 12 months ago.

After getting off to a dream start, White will be hoping to seal his spot in the second round as he faces Gary Anderson tomorrow evening in Wolverhampton. Anderson eventually got over the line against a below-par Michael Unterbuchner – who had led 2-1 in a substandard encounter.

Peter Wright stumbled over the line against a upcoming star in Jim Williams. Wright finished runner-up in last year’s edition of the Grand Slam of Darts and will be hoping to go one better this time around. Wright missed five match darts in the eighth leg of the tie and created problems for himself as his Welsh opponent sent the match to a deciding leg, only for Wright to fire in a 171 followed by double four to seal the victory.

Wright will meet Max Hopp tomorrow after the German sensation battled back from 2-0 down to beat Josh Payne 5-3, winning five of the last six legs and hitting a 123 checkout on the bullseye in the process.

Stephen Bunting reeled in the big fish en route to a 5-3 win over a Martin Schindler who has never managed to gain win on television in a singles match. The St Helens-based star will face Mensur Suljovic tomorrow after the Danish Darts Open winner eased to a 5-2 win over former Lakeside champion Scott Mitchell.

World Champion Rob Cross put himself in a good position to qualify through his group as did his opponent for tomorrow’s game Dimitri van den Bergh as the pair enjoyed wins over Mark McGeeney and Ryan Searle respectively.

The Grand Slam of Darts will continue tomorrow afternoon with all 32 men taking to the stage once again in the £250,000 tournament.

To The Point With Chris Mason – 11th November October 2018