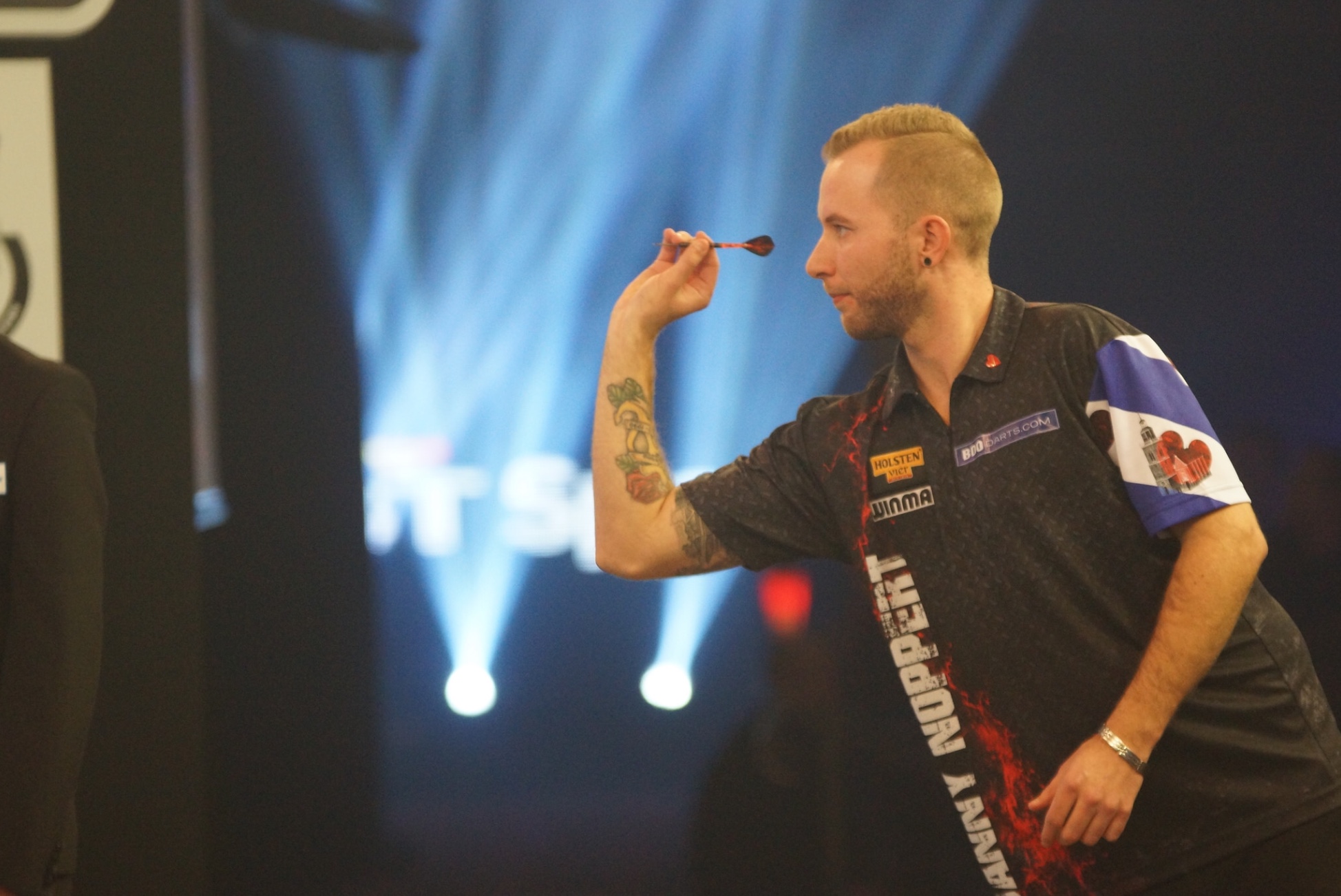 Danny Noppert set down a marker to the rest of the field tonight in Surrey. The Dutchman hit three maximums and 12 scores of over the 100 mark on the way to a 3-0 victory over Joe Chaney. Noppert won the first set 3-1 before taking out an outstanding 126 checkout to take a 2-0 set lead. American number one, Chaney, pushed the Joure-based ace in the final set but it was Noppert who came through to setup a first round encounter with Ritchie Edwards who steps in for an unwell James Hurrell.

The 2017 Lakeside runner up and Finder Darts Masters winner will take to the oche on Monday evening in Surrey.

Mark McGeeney edged past three-time World Champion Martin Adams 3-2 in a sudden death tungsten thriller. ‘Wolfie’, the three-time World Masters winner and three-time winner at the Lakeside, got off to a slow start as the Stockport-based darter took the first set 3-0 without much trouble.

Adams, playing in his 25 successive Lakeside, came straight back in set two and starting to find some form, hitting back to back to back 140s in the fourth leg of set two. McGeeney competed in the Grand Slam of Darts in November and again whitewashed Adams to take a 2-1 set lead. McGeeney took out a fantastic 103 checkout during set three.

‘Wolfie’ levelled up the encounter to take it to a last set decider. Adams got through a scrappy set to take the match right to the depth. The game went all the way to sudden death where ‘Wolfie’ hit the bullseye to have the throw but it was the man from Stockport who succeeded to the second round at the Lakeside.

Willem Mandigers produced a stunning display as he whitewashed young Welshman Nick Kenny 3-0. The Dutchman averaged just under 90 as he reached the second round at Lakeside for the very first time. Mandigers hit three 180s on the way to victory. The number 10 seed will go onto face either fellow countryman Wes Harms or Welshman Wayne Warren in round two at the Worlds.

Reining and defending Ladies World Champion Lisa Ashton whitewashed Welsh darter Rhian Griffiths 2-0 to keep her hopes alive of a fourth BDO World Championship title. Lisa Ashton, mother of darting hopefuls Danielle and Lindsey, has been playing mostly on the PDC Challenge Tour circuit this year, reaching the Quarter Finals on one occasion. Griffiths took an early 2-0 lead in set one but it still wasn’t enough as the ‘Lancashire Rose’ took the first set featuring the highest checkout of the set (82).

Ashton set up a second round match with either Australian ace Corrine or young England sensation and a former finalist at the Lakeside Fallon Sherrock courtesy of a 3-0 victory in the final set. ‘The Lancashire Rose’ hit a 77.76 average, four 140s and a 101 checkout on the way to the second round at the home of world darts.

Pengiran Mohamed made history at the Lakeside as he became the first Bruneian player to compete in a World Championship. Unfortunately, it wasn’t to be for Mohamed as he was thrashed 3-0 by former World Darts Trophy winner Gary Robson. Mohamed managed to win leg in the first set but from there it went all downhill for the Bruneian ace.

‘Big Robbo’ did produce a stunning display, despite Mohamed not being at his best. Robson, based in the town of Cramlington, produced a 84 average and an outstanding 158 checkout to set up a first round encounter with defending champion Glen Durrant.

Aussie qualifier Justin Thompson, who competed on the PDC World Series in the summer, survived more than five match darts to get through to the first round at the Lakeside. Thompson hit six 140s and a 180 in set one, winning it 3-2 before the Northern Irishman hit straight back with a 3-2 set victory of his own. Gilliland edged past ‘Tommo’ in set three as the same looked to drift away from the Aussie but the Northern Irishman missed match darts to close out a 3-1 victory. The Aussie took his chances hitting a 51 checkout to take the match to a last set decider. Thompson whitewashed a disappointed ‘Ginga Ninja’ 3-0 to setup a first round match with Target’s very own Daryl Fitton.

Deta Hedman wasn’t at her best against Oslo-based Rachna David but it was enough to reach the second round at the Lakeside once again. The postwomen from Witham averaged just under 67 and hit three 140s on her way to a 2-0 victory over the Shappi Korasandi lookalike.

Scott Mitchell produced an outstanding preformance against Lithuanian number one Darius Labanauskas, winning 3-2 in a last set decider. ‘Lucky D’ took the first set 3-2, checking out in 13, 14 and 14 dart legs. Labanauskas produced a eye-catching 113 average in set one while Scotty Dog’s wasn’t too shabby either at 107. The standard slipped slightly in set two as both players produced displays in the 97 average area with Mitchell leveling up the match at 1-1 courtesy of a 80 checkout.

Mitchell then took the lead for the first time in the match hitting double 6 to go 2-1 ahead but the Lithuanian fried straight back, though, hitting eight 140s in set four and throwing a 110 set average which is good enough to beat anyone on the planet. Dorset based Mitchell fired in a 109 average in the final set, whitewashing Labanauskas 3-0, checking out in 18, 12 and 11 darts respectively. Mitchell concluded the encounter with a average of over 98, five maximums and over 50 scores of 100 or above.

Mitchell will take on either Scott Baker or Andy Baetens in the second round at the Lakeside and judging by that performance the Farmer from Dorset will take some stopping!

The BDO World Championship will continue at the Lakeside tomorrow from 12.45pm live on Channel 4 and defending champion Glen Durrant will be in action. The coverage will continue onto next Sunday when the 2018 Lakeside champion will be crowned.

Photography courtesy of David Gill (DGMedia) and the BDO.