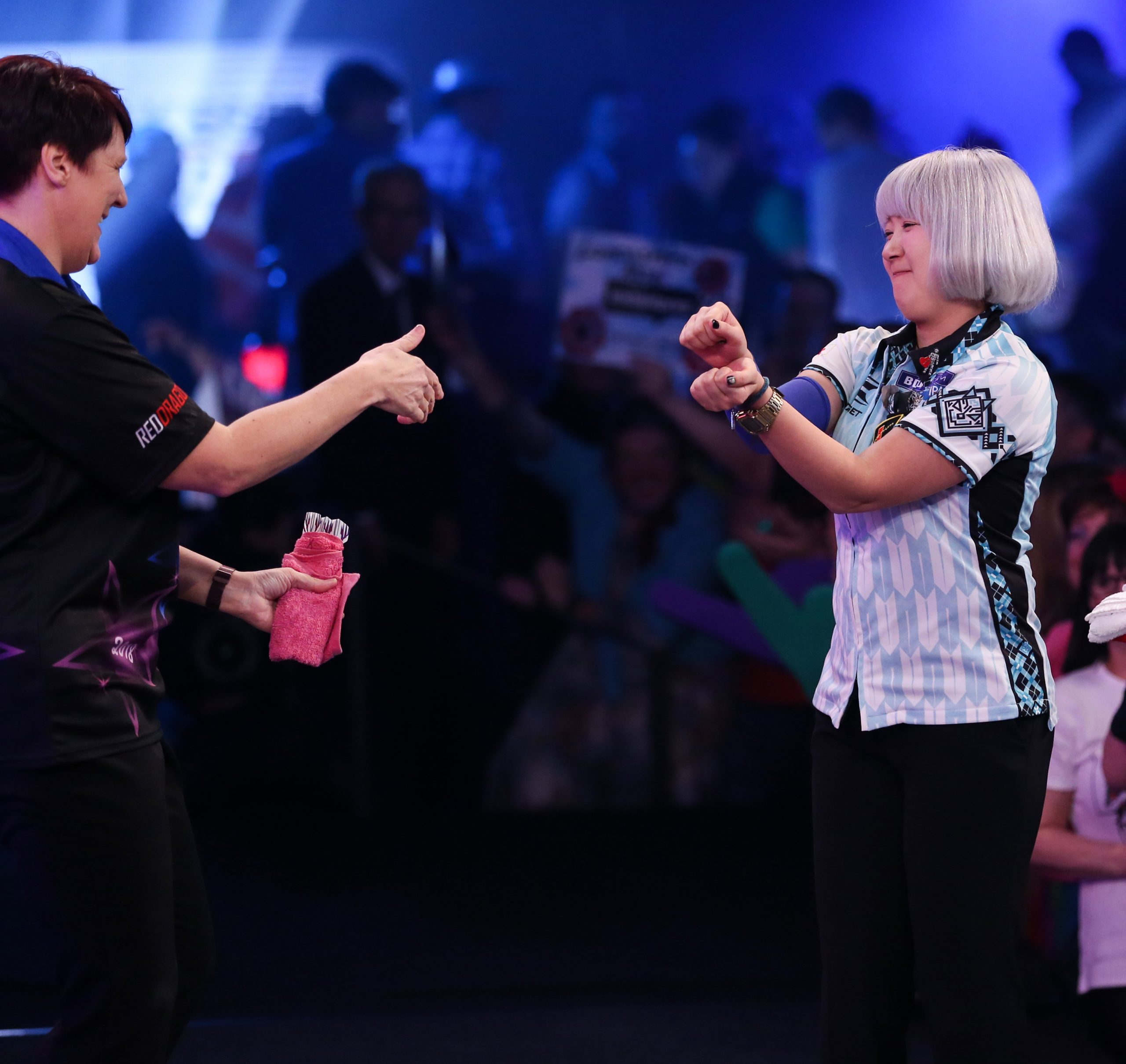 As the exertion draws to a close in London, Lisa Ashton and Mikuru Suzuki contest the women’s final on Saturday evening, with just five matches remaining in the prestigious tournament.

The former and reigning champions have been handed the showpiece staging on the penultimate day of the 43rd BDO World Championship, and rightly so.

They say cream always rises to the top and sure enough, amid seven days of shocks, drama and tension, top seeds Ashton and Suzuki collide in the ladies’ final, and four of the BDO’s elite battle it out for the men’s crown.

Sandwiched in between the men’s semi-finals and ladies’ final is a mouth-watering youth final. Ireland’s Keane Barry and Lincolnshire’s Leighton Bennett lock horns, with Bennett setting his sights on the defence of his crown.

The coverage gets underway from 1pm in the vicinity of the Indigo at the O2 in Greenwich, with nigh on a full house expected to flock inside the venue as the atmospheric latter stages enter full flow.

"The best game we've had this tournament!"

After edging out Scott Waites in a thrilling affair on Friday evening, Scott Mitchell returns to the stage just over 13 hours later. ‘Scotty Dog’ pinned the winning double tops not long before midnight as an electric crowd was created by those in attendance.

Since seeing off 14-year-old Leighton Bennett in the second round, Mitchell has upped his numbers in terms of performance throughout. The Dorset-based thrower operated considerably well against both Michael Unterbuchner and Waites.

Another stern challenge arrives for the former world champion, with Wayne Warren vying to seal his place in the final and keep Wales’ hopes of an all-Welsh showpiece well and truly alive.

Those Welsh wishes could have been scuppered in the second round as, if it weren’t for squandered doubles from Australia’s Justin Thompson, Warren could have potentially bowed out.

Despite a seemingly below-par opening match, Warren, who ended a seven-year await for a BDO ranking title earlier this year in Belgium, has surpassed the 90 mark in terms of averages every time he’s stepped foot on the oche within the last week.

Warren has previously beaten Mitchell in front of the television screens also. The roofer by trade landed a major scalp over the farmer, beating him 7-2 at the World Trophy just weeks after Mitchell had lifted the World Championship in 2015.

The 57-year-old clocked a 93 average on that occasion – which falls around about what he’s been consistently showing this week. Although, Mitchell did claim the victory in the most recent encounter between the two, beating Warren in the final of the Denmark Masters two years ago.

Keane Barry wins the Irish Matchplay in a last leg decider which sees the 17-year-old secure a spot at Alexandra Palace in December! pic.twitter.com/SDMEnM6mSz

In spite of a disappointing first hurdle departure at the hands of the now semi-finalist Scott Mitchell, Leighton Bennett returns to the O2 stage – this time eying the defence of his World Youth Championship crown against the 17-year-old, Keane Barry.

‘Boom Boom’ would have been hoping for a slightly more desirable display on his senior debut against the former world champion, though, Saturday provides a contrasting opportunity, with another esteemed title on the line.

The earlier stages of the 2020 BDO World Youth Championships were played out in Essex during the World Masters, with both Bennett and Barry surviving scares en route to the final.

Bennett was forced to come through a first round deciding leg with Reece Pauling, while a similar feat was needed in Barry’s case, with Blackburn’s Nathan Care performing superbly well in pushing the Irishman to the distance in the second round.

Barry was crowned the Junior Darts Corporation’s world champion as recent as a few weeks ago. ‘Dynamite’ ousted the Czech Republic’s Adam Gawlas on the Alexandra Palace stage to lift the newly-named Tommy Cox Trophy.

It’s without a shadow of doubt the dream youth final. It’s the final everybody in the world of the sport wanted to witness. If both produce anything near their best, be prepared for fireworks.

A 5-1 win for Jim Williams over Paul Hogan!

He's booked his place in the last four.

Having defeated Belgium’s Mario Vandenbogaerde twice on his way to a Belgian double in May of two years ago, Jim Williams will need to do so once again if he hopes to achieve his aspiration of becoming champion of the world.

The Welshman’s form will be firmly examined on Saturday evening against the composed Vandenbogaerde – who has averaged around the 90 mark throughout the duration of his World Championship debut.

His consistency has been more prominent than that of his Welsh opponent, despite not having been tested or made to play to his entire potential. Vandenbogaerde defeated Poland’s Sebastian Steyer with considerable ease in his opening match, before thrashing Dennie Olde Kalter in the third round.

Mario Vandenbogaerde is through!

He wins 5-3 to continue his superb form and reach the semi-finals.

The Ypres-based ace booked his place in the semi-finals with a relatively comfortable victory over David Evans, and his chances of becoming the first world champion to emerge from Belgium remain within the realms of possibilities.

Williams, who booked his place in his second consecutive World Championship semi-final with a reassuring yet unconvincing win over Paul Hogan, will be vying to reach the BDO’s showpiece for the first time just months after lifting his maiden major honour in Blackburn.

Both the Belgian and the Welshman – as well as the other semi-finalists Warren and Mitchell – have now also secured their return to the O2 for January 2021, with thanks to the semi-finalists receiving an invite to the following edition. This enables them to pick and choice between events throughout the remainder of the season.

Is there a better walk-on song than this? 🦈🎶

In January of last year, Mikuru Suzuki was crowned champion of the world on debut, after brushing aside all in front of her without dropping a single set. The Japanese sensation whitewashed Lisa Ashton in the very first round of that breakthrough tournament.

12 months on and the two titans of the women’s game meet once again – this time in the ladies’ finale on Saturday evening.

Obvious credit goes towards the British Darts Organisation for moving the ladies’ final to become Saturday’s showpiece, after in previous years it being sandwiched in between two men’s semi-finals.

She wins convincingly to reach the final!

Ashton has been the better player of the two thus far, failing to drop a set en route to her sixth World Championship final, while Suzuki survived a scare in the first round at the hands of a valiant Maria O’Brien.

‘The Lancashire Rose’ eased past Corrine Hammond on Friday evening, with missed doubles proving costly for the Australian, as Suzuki edged out the 16-year-old debutant, Beau Greaves.

The miraculous Suzuki broke onto the scene over two years ago at the World Masters, beating Ashton, and since then has not looked back, lifting both the prestigious world title and the Dutch Open.

Ashton and her Japanese opponent met twice last year following their Lakeside Country Club showdown, with spoils being shared. Both meetings came during the Welsh double-header in Prestatyn.

The BDO Darts World Championship has come in for criticism this week – but players and fans at the O2 Arena were determined to prove the event is still thriving 🎯 pic.twitter.com/DCraYDgnoJ