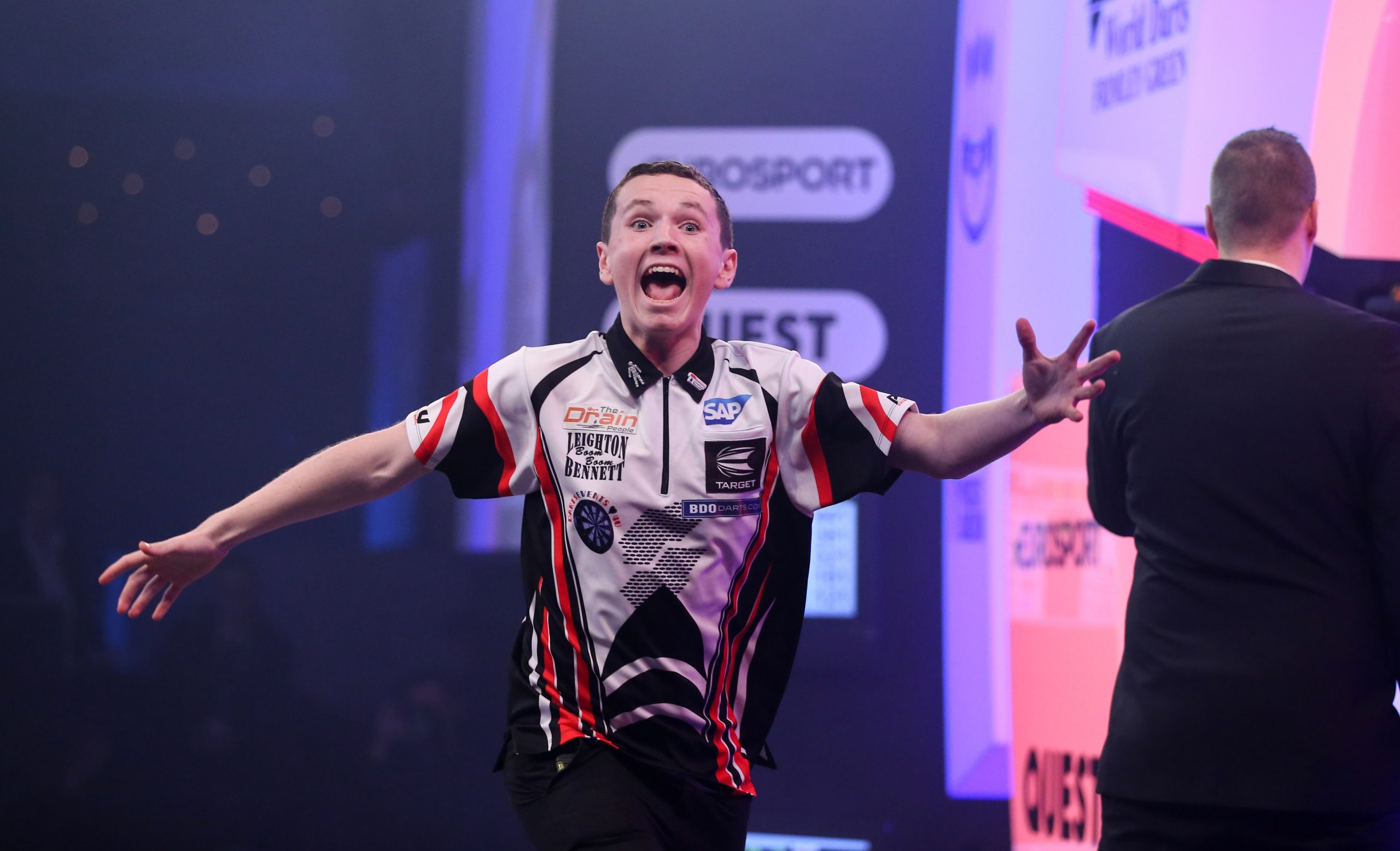 Following the narrow miss of Paul Hogan for a nine-dart finish on Monday evening, proceedings resume at the Indigo O2, with a certain 14-year-old entering the fray.

It would have been the first nine-darter since Paul Lim’s illusive, history-making feat a mere 30 years ago, though, eight more hopefuls take to the stage with the capability of doing so on Tuesday.

Nick Fullwell’s first round display in seeing off David Cameron was one of most composed we’ve witnessed thus far on the O2 stage. The Stourbridge thrower averaged 90.44 and pinned six maximums in denying his Canadian opponent on debut.

Fullwell lifted a PDC Challenge Tour title in July, and was a finalist at the BDO-ranked Lincolnshire Open last year.

His second round opponent, David Evans, has likewise won a PDC Challenge Tour title within the last eighteen months, and stands tall as the current BDO world number eleven.

Out of the twelve BDO-ranked tournaments he played last year, Evans failed to reach the quarter-finals or later in only three of those. His consistency throughout the last year or so has been surreal.

The Manchester-based ace was unsuccessful in lifting a title throughout the duration of last term, though, embarked on a run to the final of the French Classic, losing out to Adam Smith-Neale.

After correctly addressing a broken foot, Nick Kenny returns to the World Championship stage, vying for success, before heading to PDC Qualifying School later this month.

The current world number four, Kenny, won the Bruges Open, Belgium Open and the French Open last year, during a stellar year for the Welshman. He was also a semi-finalist at November’s prestigious Italian Grand Masters amid a return from injury.

His Dutch opponent, Dennie Olde Kalter, has undergone a breakthrough twelve-month period, having reigned victorious at the British Classic and was a losing finalist in Switzerland.

The Hengelo-based darter denied Dave Parletti on that particular occasion to join the likes of Glen Durrant, Gary Anderson, Phil Taylor, John Lowe and Eric Bristow in having won the British Classic – one of the most distinguished events on the BDO calendar.

Neither Kenny nor Olde Kalter have won on a World Championship stage prior to this year, with the Dutchman making his debut and the Welshman having lost at the first hurdle in both of his previous appearances.

After narrowly missing out in the semi-finals last time around at the hands of her good friend Lorraine Winstanley, Russia’s Anastasia Dobromyslova enters the fray once again, facing Dutchwomen, Sharon Prins.

Three-time women’s champion of the world, Dobromyslova, has lost just once in the opening round at the World Championship, and has never been defeated at the quarter-finals hurdle. Therefore, if she was to get past Prins, expect to witness her in the last four.

Dobromyslova was a runner-up in both the World Masters and World Trophy last year, falling short against Lisa Ashton in both, and won two BDO-ranked titles during a stellar year.

‘From Russia with Love’ shared the winner’s podium with her husband, Tony Martin, in Slovakia, before lifting the England Classic in September.

As for Prins, she currently sits 15th in the women’s world rankings, after reaching double figures in terms of quarter-finals last year alone.

The 31-year-old claimed the Catalonia Open in September, and was also a defeated finalist in the Netherlands and Belgium.

Prins departed at the quarter-final hurdle twelve months ago, losing out to eventual champion, Mikuru Suzuki of Japan.

The pair have clashed twice at the World Trophy, with Dobromyslova reigning victorious on both occasions, though, Prins whitewashed her Russian opponent in the 2017 London Classic final.

?? Next for Veenstra is a clash with @ScottWaites180 and if it's anything like today's game it will be a classic…pic.twitter.com/hdBOQ50eUh

After preforming to a considerably good standard on debut, Justin Hood returns to the stage – this time alongside the reigning Dutch Open champion Richard Veenstra.

Somerset’s Hood averaged over the 90 mark in a 3-1 victory over the history-making Gabriel Pascaru of Romania, whilst making his first appearance at the BDO World Championship.

‘Happy Feet’ denied former world finalist Jeff Smith in the play-offs to earn his place at the O2 in London, and told dartsplanet.tv ahead of the tournament that fancied his chances against both Pascaru and his second round opponent, Veenstra of the Netherlands.

World number two Veenstra lifted just the two titles last term, during a below-per year compared to his sky-high standards. The Dutchman reigned victorious at the prestigious Dutch Open in Assen, and in Luxembourg.

Despite reaching the World Trophy final in September, Veenstra played below the needed level at both the World Masters and the Grand Slam of Darts, and endured a disappointing second round exit in January’s World Championship.

The crowd are on their feet for Ben Hazel who secures the second set ?

Let's hope his @SpursOfficial hero @LedleyKing saw that one!

As Paul Nicholson correctly alluded in commentary, Gary Robson has a game on his hands in Hertfordshire’s Ben Hazel.

The former England Open champion underwent a title drought throughout the duration of last year, with his last event victory coming almost three years ago.

‘Robbo’ did embark on a run to the final in Romania last January – where he lost out to  Dave Parletti – following a disappointing first round World Championship exit.

The move away from the Lakeside has probably come at a rather apt time for Cramlington-based ace, having won just twice in the last seven years at the World Championship.

Hazel will be looking to make that run even more abysmal than it already is in Tuesday evening’s opener, having performed reasonably well against America’s Joe Chaney in round one.

"Sprint finish stuff from the legend that is Lisa Ashton!" ?

? The Lancashire Rose completes a sensational comeback to be crowned #BDOWorldMasters champion for the third time ??? pic.twitter.com/GoiDaF83fr

Subsequent to her enduring a first round exit at the hands of eventual champion Mikuru Suzuki last time around, Lisa Ashton returns to the World Championship stage, this time facing Paula Jacklin.

Ashton, who lost in the first round for the first ever time in January of last year, sits firmly at the top of the pile when it comes to the women’s rankings, after lifting both the World Masters and World Trophy in recent months.

‘The Lancashire Rose’ was also triumphant at the Northern Cyprus Classic, British Classic and the Czech Open last term, as well as being a beaten finalist in four other tournaments.

Her opponent, Paula Jacklin, has it up against her once again, having never won at the World Championship, despite making five appearances.

The Lincolnshire thrower has lost out to Lisa Ashton and three times to Aileen de Graaf, and has never won a set at the tournament.

Since winning the World Youth Championship for the first time in January, and running and jumping in jubilation, despite being on the most historic stage in the sport, 14-year-old Leighton Bennett has continued to be sensation.

His buoyant and effervescent ways have gone the distance, qualifying for his first senior World Championship, having been born in just 2005.

A fantastic victory for 13-year old Leighton Bennett as he takes out 'The Power'.
[? @rabRBSltd] pic.twitter.com/ddsZpYK6Dh

After reigning victorious at the World Youth Championship last year, ‘Boom Boom’ has produced some scintillating stuff on the BDO circuit. And, despite not having not quite yet lifted a ranking title, the Lincolnshire youngster has come as close as possible.

He was a runner-up at the Luxembourg Open in July, as well as a beaten semi-finalist at five other events, including the Welsh Open and the German Open.

Bennett is 35 years the junior of his opponent Scott Mitchell, with Mitchell having lifted the world title five years ago when Bennett had just reached double figures in terms of age!

Mitchell was a World Championship quarter-finalist twelve months ago, and has since then lifted only the England Masters, amid judging his darting career with the management of his local farm in Devon.

After leading to history being formed on Saturday evening, Thibault Tricole returns to the O2 stage, facing Scotland’s Ryan Hogarth.

Tricole defeated Ross Montgomery on the opening day in London, performing superbly well against the Italian Grand Masters champion, with a crucial 76 checkout in the deciding leg proving the match-winning feat for the Frenchman.

Hogarth was an unsuccessful finalist at the High Performance Roofing Open in Ireland, as well as the more prestigious Dutch Open – where he was narrowly defeated by Richard Veenstra.

All avenues lead to a closely contested encounter between the Frenchman and the Scotsman, with the winner facing the World Trophy champion Jim Williams in the third round.