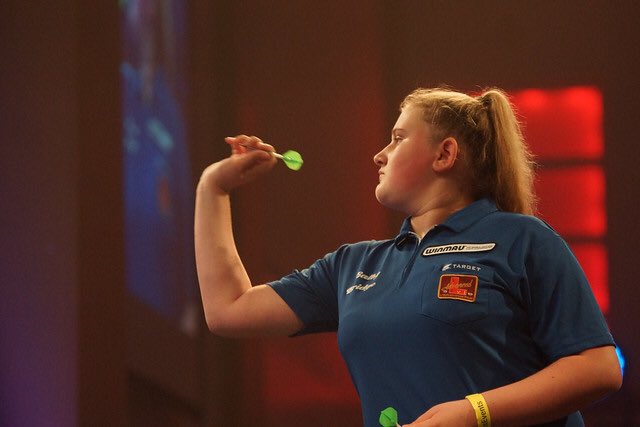 As the BDO World Championship heads to the Indigo at the O2 for the first time, the 43rd staging of the event commences on Saturday afternoon.

The men’s favourite Jim Williams is among those in action on the opening day, as well as 15-year-old Beau Greaves and the history-making Thibault Tricole of France.

Not many players travelling to London’s O2 this weekend will have their name and photo emblazoned on a van… #BDO pic.twitter.com/einSEiCYSD

Major semi-finalists collide in the first ever BDO World Championship clash to be played on the Indigo at the O2 stage, as Belgium’s Mario Vandenbogaerde takes on Sebastian Steyer of Poland.

Vandenbogarde reached the semi-finals of the World Masters in October, just months after lifting his second BDO ranking title at the German Masters.

The Belgian will be making his World Championship debut, as will his Polish opponent – who reached the World Trophy semi-finals in September.

Steyer was a finalist at both the Greek Open and the Polish Open last year, in a twelve-month period that saw him embark on runs to the semi-finals on six occasions.

Thompson, 50, lifted the ranked North Queensland Classic, Melton Classic and Geelong Dart Club Classic down under, during a year that saw him top the Australian rankings.

The Bendigo-based ace also made seven additional quarter-finals or further throughout the duration of last term.

As for Williams, he came through the play-off in Essex in order to make his debut. The Boston man saw off Andrew Kateley and Wes Newton to book his place.

The Aussie was defeated in a closely contested clash with Michael Unterbuchner last time around, with the German progressing a narrow 3-2 victor.

Corrine Hammond would have been preparing to face the global sensation, Fallon Sherrock, in the Women’s World Championship first round, though, after Sherrock’s withdrawal, it’s her late replacement Vicky Pruim who will grace the stage alongside the Australian.

Hammond came through the play-off qualifiers in Essex in order to make her fifth successive appearance in the women’s showpiece spectacle.

The former World Masters and World Championship runner-up lifted the German Masters last year, and reached five additional semi-finals, despite being pipped by Tori Kewish as the Australian number one.

Hammond’s opponent, Pruim, only found out on Monday that she would be heading to London, and partaking in her first World Championship appearance in two years – make of that what you will!

However the Belgium-born Swede, who is currently located above Hammond in the BDO rankings, reached seven quarter-finals on the circuit last term.

After recently confirming his intentions to participate at PDC Qualifying School later this month, with the dream being to play in the famous finery that is the Alexandra Palace, Chris Landman takes to the BDO World Championship stage for quite possibly the final time.

Landman has become a prominent figure in the BDO within the last few years, having qualified for his third successive World Championship this year.

The Dutchman had a relatively poor year last time around, reaching just two semi-finals in Belgium and Slovakia. His opponent, Parletti, will be the firm favourite heading into the encounter.

Current BDO number seven, Parletti, was a semi-finalist at the prestigious Dutch Open last February, and represented the BDO during November’s Grand Slam of Darts, beating William O’Connor in Wolverhampton.

The postman from London made a rather brief World Championship debut twelve months ago, commencing a year that saw him lift the Welsh Classic and the Romanian International Open.

Both Parletti and Landman were knockout out at the first hurdle last year, with Krzysztof Kciuk doing for the former and Kyle McKinstry the latter.

? Glen Durrant has been knocked out of the PDC #QSchool at the 3rd round stage, losing to Darren Herewini!

Not a great day for him… pic.twitter.com/inNBBpmoAE

Darren Herewini and Simon Stainton will make their World Championship debuts, with both having lifted multiple BDO ranking titles within the last year.

Despite being pipped by Mark McGrath as New Zealand’s number one, Herewini topped the Kiwi rankings, while England’s Stainton is currently ranked 10th within the BDO system following a blistering start to the new season.

Herewini lifted four titles down under last year, including a double in Canterbury, and holds the marginal edge when it comes to television experience, having played Phil Taylor at the 2017 Auckland Darts Masters.

The Porirua thrower lifted the prestigious WDF World Cup in October, defeating Peter Machin in the final. Herewini had previously beaten Mitchell Clegg in the last eight, whilst averaging 98.5 in a scintillating showing.

Stainton’s start to the new season, which began back in October, has been admired by many. He played mesmerisingly well in Cyprus, pocketing both the Northern Cyprus Open and Masters.

The left-hander’s only previous appearance on television was during the 2019 World Masters – where he was defeated by Lincolnshire Open champion, Graham Usher.

How's this for a tight 1⃣8⃣0⃣ from Beau Greaves #Pinhead #EDO pic.twitter.com/w4jeSaHCGU

England takes on Australia. No, it’s not the Ashes, but it’s very much so the biggest moment in both Beau Greaves’ and Tori Kewish’s careers.

Australia’s Kewish will make her World Championship debut, as will her opponent, whilst all the speculation will be surrounding 15-year-old Greaves from Doncaster.

Her success has been well documented throughout the year, with many perhaps putting too much pressure on someone who is making their debut at such as prestigious tournament, in the midst of a year that contains her school exams in May.

As for Kewish, she’s also claimed titles galore throughout the last twelve months, having clinched five crowns in Australia, including the prestigious Australian Grand Masters.

The Melbourne-based ace reached the last 16 of both the World Masters and Denmark Open, in a year that saw her pip Corrine Hammond as the Aussie number one.

Ross Montgomery and Thibault Tricole are currently within the top 15 on the season-to-date rankings table, indicating their superb start to the current campaign.

Montgomery has undergone a tough time of late away from the oche, with his wife being unwell, though, his recent titles at the Czech Open and Italian Grand Masters prove his worth heading into the tournament.

Tricole, who is fifth after reaching finals in Italy and Malta, will make history on Saturday evening at the O2, in becoming the first Frenchman to qualify for the World Championship.

The Frenchman lifted both the Torremolinos Open and the Greek Open, and was defeated in three further finals throughout a breakthrough for not only Tricole, but also French darts as a whole.

Tricole recently made his televised debut at the World Masters and will be hoping to take advantage of Montgomery’s relatively poor World Championship record, of eight first round defeats in the last 12 years.

Jim Williams puts in a stellar performance to keep his Grand Slam hopes alive as he defeats Ross Smith 5-1!

After winning his maiden major crowd at the BDO World Trophy in September, Jim Williams is the heavy favourite to lift the BDO showpiece. His campaign will commence with a tough test against Scotland’s Gary Stone.

Scotland’s Stone ended a seven-year wait for a BDO ranking title at last year’s Swedish Classic, and reached four additional semi-finals, including a final in Belgium.

Stone will be making his first World Championship appearance in seven years, having endured a second round exit on that particular occasion.

Williams, the current world number three, lifted only two titles last year, though, those being two of the biggest on the calendar in the aforementioned World Trophy and the England Open.

‘The Quiff’ featured as a BDO representative in November’s Grand Slam of Darts, winning one match against Ross Smith.

If Williams hadn’t run into a rampant three-time world champion in Glen Durrant last time around, he may have already been crowned champion of the world already, however, this year is seemingly the year of the Welshman.