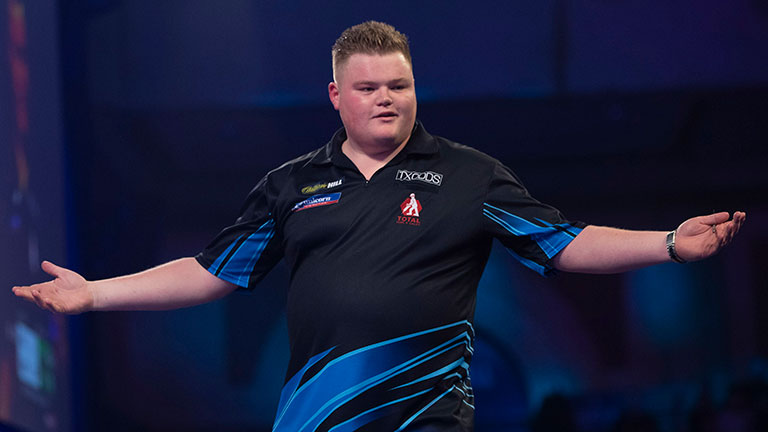 Vincent van der Voort and Harry Ward will make their debut at next week’s World Series Finals in Austria after coming through the Tour Card holder qualifier.

Six days of play at the H+ Hotel in Niedernhausen, near Frankfurt, got underway with 94 players in action, vying for four spots in the 24-man tournament from 18 to 20 September.

Steve Beaton and Joe Cullen also qualified: the evergreen ‘Bronzed Adonis’ will make his third appearance in the event, while ‘Rockstar’ reached the quarter-finals in 2016.

The top 16 players on Friday were seeded through to the last 64, with 30 players taking part in the preliminary round. Callan Rydz and Ryan Murray put in eye-catching performances in that round, while Luke Humphries thrashed Kim Huybrechts and Jason Lowe put out Robert Thornton.

Stephen Bunting and Mervyn King were among the seeds to lose their opening match, going out to Madars Razma and Ryan Joyce respectively.

Elsewhere in the last 64, Chris Dobey whitewashed Gavin Carlin with a 103 average and Darren Webster could only average 72 in a 5-1 defeat to Ron Meulenkamp.

Jonny Clayton edged past Jason Lowe to go within two wins of qualifying, while Jamie Hughes was impressive in victory against Brendan Dolan and Scott Waites defeated Jermaine Wattimena.

There were a few surprise names in the last 16, such as tour rookie Jesús Noguera, former ProTour winner Joe Murnan and the aforementioned Ward. The Spaniard was arguably fortunate to get that far, but quashed that narrative with a fantastic 5-0 win over Max Hopp.

Rydz’s run came to an end with defeat to Cullen as Gabriel Clemens saw off Clayton and Dobey put in another big display to beat Meulenkamp.

Former World Champion Beaton had already seen off Dirk van Duijvenbode, Andy Hamilton and Steve Lennon, so would’ve been confident going into the winner-takes-all clash with Clemens, and duly did the job, winning 5-3 with a 96 average.

Cullen started his day with a 101 average in victory over Ryan Meikle, before putting out Barrie Bates and north-east thrower Rydz on the way to a 5-3 final-round success against Noguera.

PDC event winner Ward knocked out established names William O’Connor and Jan Dekker as well as beating Bolton’s Murnan and German youngster Christian Bunse. That set up a meeting with Chris Dobey for a place in Salzburg, and after a scrappy affair, Ward took it 5-3.

Dutchman Van der Voort has been critical of non-ranking events in the past, but won’t mind taking part in one next weekend as he beat Josh Payne, Marko Kantele, two-time World Champion Waites, and finally, Latvian Madars Razma to progress.

The Autumn Series of five Players Championship events gets underway from 11am BST on Saturday from Niedernhausen.

From Glen Durrant to Damon Heta: Ten players to look out for at the PDC Autumn Series