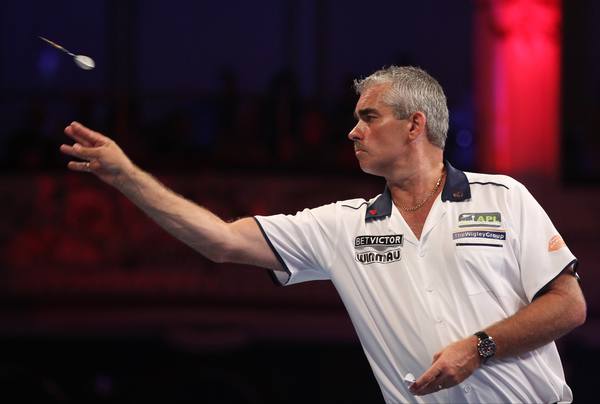 Beaton sees off Barney while Durrant progresses at ET1

Steve Beaton defeated Raymond van Barneveld 6-4 in the main event of day one of the 2019 European Tour while Glen Durrant saw off a tough test from Michael Rosenauer by the same scoreline.

When the draw came out on Thursday afternoon, the tie between ‘Barney’ and Beaton jumped off the page immediately, especially so after the Dutchman went on to record his first Premier League win of his retirement season the following evening. Van Barneveld’s first European Tour appearance for two years started off well, taking out 103 and 76 for a 2-1 lead, but the evergreen ‘Bronzed Adonis’ was also on fine form, finding a twelve-darter for two apiece.

A former winner of this event, ‘Barney’ stuck at the task and won the next two legs in 27 darts to edge towards a second round meeting with Rob Cross. However, recent UK Open quarter-finalist Beaton won the next four legs, capitalising on a dip from the Dutchman, who missed darts to win two of them. That means it’s the 1996 World Champion who faces ‘Voltage’ on Saturday evening, instead, after their meetings in both of the last two World Grands Prix.

Glen Durrant was one of a number of players making their European Tour debut in Leverkusen, and the three-time Lakeside Champion surged into a 4-1 lead only for German veteran Michael Rosenauer to win the next three legs. However, ‘Duzza’ won through in the end, 6-4, with 50% doubles success to set up a clash with Jermaine Wattimena. Another Host Nation qualifier making his Euro Tour bow was Nico Kurz. The youngster stayed with Kim Huybrechts in the early stages of their match, and then took out 131 to the delight of the home crowd.

‘The Hurricane’ admitted he was ‘lucky’ in his interview afterwards as he somehow progressed, surviving seven match darts from the German and moving through to take on Peter Wright. The other two Host Nation players also crashed out – Jyhan Artut and Fabian Herz were fairly disappointing in their 6-4 and 6-3 losses to Wesley Plaisier and Scott Taylor respectively, although it was great to see ‘The Eagle’ back on the European Tour stage.

The highest average of the opening day’s action was only a 97.24 and it came from Adam Hunt as he hit 6 out of his 7 double attempts to complete a 6-3 success over debutant Danny van Trijp. The afternoon session also saw impressive performances from Justin Pipe, winning 6-3 over Ryan Meikle, Ross Smith, whitewashing Ricky Williams, and Matthew Dennant, seeing off Madars Razma in a close encounter.

Pavel Jirkal marked his European Tour debut with a convincing win – his 6-1 victory over an underwhelming William Borland included a 156 checkout, the highest of the tournament so far, and sees the Czech star book a date with Darren Webster in the first game of round two. In form Ted Evetts didn’t quite reproduce some of the darts we’ve seen him produce so far in 2019, but his average of 88.61 was still enough for a 6-3 win over ‘The Assassin’ Martin Atkins.

YouTube sensation Matthew Edgar was gutted with a deciding leg defeat to Krzysztof Ratajski in a game which saw large amounts of missed doubles, while Jeffrey de Zwaan eased past Josh Payne 6-1. Three other players all won in a similar fashion to ‘The Black Cobra’ in the evening session despite not setting the place alight, as Mervyn King beat Jason Wilson 6-1, Dimitri Van den Bergh thrashed Ritchie Edhouse 6-1 and Vincent van der Voort’s good run continued with a 6-2 victory over Wayne Jones.

The first round maybe didn’t live up to what we all were expecting, although the early stages of Barney-Beaton and the latter part of Huybrechts-Kurz were certainly highlights. Saturday sees today’s 16 winners return for the last 32 as Michael van Gerwen and Mervyn King renew rivalries, Adrian Lewis and Dimitri Van den Bergh go head-to-head and Wattimena and Durrant meet in a mouth-watering second day of action.