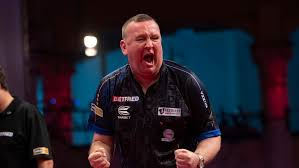 It’s the beginning of the second round of the Betfred World Matchplay at the Winter Gardens in Blackpool this evening, and there are some real mouth watering matches to look forward to.

The highlight is undoubtedly a meeting between the current PDC and BDO World Champions.

Matches are now slightly increased to best of 21, with the usual tie break rules applying.

Kicking off round two is a meeting between former Youth World Champions’ in England’s Michael Smith and Germany’s Max Hopp.

Smith eventually got firing in the end on Sunday afternoon, as he over came a spirited challenge of debutant, Jamie Hughes, 10-7. Hughes led 6-3. and was averaging over 100, before a combination of “Yozza” running out of gas, and Smith significantly upping his game, allowed “Bully Boy” to clinch victory with a 98.78 average.

Hopp showed great composure in nailing a 120 checkout, to a back drop of boos and cat calls, to save the match against Dave Chisnall at 9-9. Hopp eventually came through 11-9 for an impressive victory.

Prediction: Although Hopp impressed in beating Chisnall, he will need to put a few points on his average if he is to keep up with Smith. Smith will need to start this match the way he ended his match with Hughes, and if he does, it should be a simple enough 11-7 win for him.

Two seeds go head to head in match two, as familiar faces at the business end of tournaments meet in James Wade and Mensur Suljovic.

Wade dodges several bullets against Jeffrey de Zwaan in round one, and eventually performed a familiar get out of jail escape to pip the Dutchman, 13-12 in a sudden death shootout.

Suljovic had no such problems in his opener, as he frustrated and bullied Jermaine Wattimena in a 10-1 rout.

Prediction: After surviving several match darts against de Zwaan, Wade will feel like his name is on yet another cup. In Suljovic though, Wade faces a man who he has lost eleven times to in their seventeen meetings. I can see Wade becoming frustrated with Suljovic’s methodical approach, and I favour “The Gentle” to come through 11-8.

Defending Champion, Gary Anderson, would have expected to be meeting Nathan Aspinall in round two, but instead faces Mervyn King, who was in inspired form in his 10-5 victory over the UK Open Champion on the weekend. A 160 checkout and a 100.55 average sparked a welcome return to form for “The King”.

Anderson had to be more workmanlike in his 10-6 win against Danny Noppert. A 93.75 average was enough for the Scot, but he will need to produce a bit more fireworks tonight to take care of King.

Prediction: Anderson should be settled now after recording an opening win, and I think he can up his game considerably after the Noppert win. King will need to perform to exactly the same level as his victory over Aspinall, and I feel this may be too much to ask. An 11-6 win for Anderson is my pick.

The final match of the evening is an absolute cracker.

It’s a real mouth watering clash, and, with MVG’s recent averages and double trouble, coupled with Durrant’s impressive start to life in the PDC, its a real 50/50 affair.

van Gerwen had a torrid time on the doubles in his 10-6 first round win against Steve Beaton, nailing only ten of thirty seven attempts. He also averaged 93, which is now the twelfth straight occasion that he has failed to register a ton plus average on TV.

Durrant, by contrast, was a model of consistency in the opening round, as he systematically broke down Adrian Lewis for a 10-4 win. A 101.05 average, along with over 50% success on the doubles, makes “Duzza” a dangerous assignment for the Dutchman this evening.

Prediction: A lot depends on the first two “mini sessions” in this one, and if Durrant can lead, or keep close order, I believe he will be able to fend van Gerwen off in the end. I can see the Dutchman’s double trouble eventually haunting him, and lean towards an inform Durrant closing out a 13-11 win in overtime.