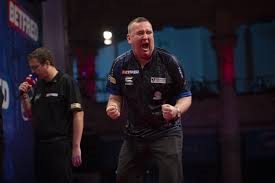 The last eight of a pulsating Betfred World Matchplay gets underway at the Winter Gardens in Blackpool with the first two quarter finals taking place.

It’s been an excellent tournament so far, and all remaining participants will believe that they can lift the Phil Taylor Trophy come Sunday night.

Matches are now in marathon mode, at best of 31 legs, with usual tie break rules applying.

Here is your Thursday night preview.

If Mervyn King is to go all the way in Blackpool, he will have amassed an impressive list of victims along the way.

Tonight’s quarter final assignment sees him go up against Michael Smith, who would have fully been expecting to play Anderson or Aspinall at this stage of the competition.

Smith has a great chance to fulfil his promise of TV “Majors” and this is an ideal tournament for him to go all the way in.

Prediction: I think the extended format at this stage may be against King, who struggles with the heat on stage, and a first to sixteen match (at least) is a hard slog for most. Smith can throw all day, and has a languid style that suits a long format. King’s main hope is to continue his excellent finishing, which has been impressive thus far. Smith will need to tighten up on his doubling, as a just over 30% success rate allowed Max Hopp to push him to the wire in round two. I favour Smith in this one, and can see him running out a worthy 16-10 winner.

Glen Durrant is on the crest of a wave having expertly dealt with current PDC World Champion, and World number one, Michael van Gerwen on Tuesday night. This followed a 10-4 demolition of two time World Champion, Adrian Lewis in round one.

The Middlesbrough man showed bags of heart and bottle to come through, and prove to the wider world that he really is the real deal, and a major threat in the PDC after a hat trick of BDO World Titles.

He now faces James Wade, who must feel that the gods are on his side after surviving match darts against Jeffrey de Zwaan in round one, coming through a last leg decider, and then advancing in overtime against Mensur Suljovic on Tuesday night.

One thing with Wade is he never knows when he is beaten, even if his opponent may play to a higher average to him in matches. He simply finds a way to win, and that is a Champion’s quality. Although in Durrant, Wade will surely have to up his game a few notches to his first two outings in Blackpool.

Prediction: Durrant is in the form of his life, and has the belief he can beat anyone. Wade will be a tough proposition for Durrant, as he is a dogged character, and never knows when he is beaten. I think “Duzza” will be too strong for Wade, and not let him off the hook like the Aldershot man’s past opponents have. A 16-13 Durrant win for me.

Whitlock Involved In Social Media Spat With Unicorn Over Board Damage