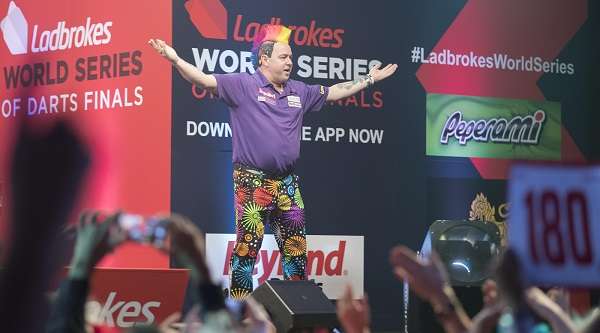 Brisbane Darts Masters Round One Preview

Johnny CreeLatest Darts News
By LoneWolf180
0 Comments
The World Series travels to Brisbane on Friday as the PDC stars square off against the Australian qualifiers, at the Brisbane Convention Centre.
The sixth and final event of the 2018 World Series, following which the seedings for November’s World Series Finals will be confirmed, features 16 players battling it out for the £20,000 top prize.
So far, there have been five different winners from five World Series events in 2018 – the latest won by Peter Snakebite Wright in Melbourne last weekend.
The man from Mendham, Wright, heads to Brisbane as the number one seed and reward for his win last week is a tough opponent in Australian qualifier Justin Thompson – who appeared in last year’s Perth Masters and Melbourne Masters. Justin also appeared in the BDO World Championship in 2018 beating Chris Gilliland in the preliminary rounds. Peter Wright is in solid form and I expect a rout here 6-2.
My choice of the First Round features an all-Australian match between Simon Whitlock and Corey Cadby as the pair play for the second week in a row. Whitlock had Cadby’s number last weekend, but only beat him 6-4. I expect another close encounter and again I am picking Cadby.
Whitlock caved against MVG when he needed just two solid legs to put out the green machine. For me I can’t see Cadby losing two in a row, he was off last week, maybe due to ring rust, but I expect him to be back to full fitness this week. Cadby 6-4.
World Matchplay champion Gary Anderson, takes on Damon Heta in a repeat of last week’s Melbourne Quarter-Final.
Anderson was given a test by Heta – who had nailed Kyle Anderson in Round One – before the Flying Scotsman eventually won out 10-7, when he awoke from his mid match slumber. I felt the last time they played Gary was in sleep mode half way through and expected to get through one way or another. Nothing to suggest anything different here. Gary to win 6-3.
Michael Smith, last week’s beaten finalist, takes on his namesake DPA Qualifier Raymond Smith.
The Australian, who featured in the 2017 BDO World Championship, was at the mercy of Michael van Gerwen in their match last week as MVG ran out a 6-1 winner with a whopping 111 average.
I have Michael Smith to win 6-1 here to stamp his intentions early. His power scoring, as Rod Harrington puts it, is on a par with MVG at times. Far too strong for Raymond Smith.
Van Gerwen starts out as the odds-on tournament favourite and it would be the biggest shock of the year for him to lose out to the New Zealand qualifier Mark Cleaver. MVG to win 6-2.
Reigning World Champion Rob Cross looks to inflict a third consecutive First Round exit on Tim Pusey.
Cross is still searching for his first televised title since the World Championship and heads to Brisbane as the number four seed and I expect him to win out 6-2. I don’t think Cross will win this tournament either, so his search for another TV title goes on I fear. He is a really consistent scorer but just has not shown it since his World Championship win. He could do with losing a few more pounds and getting back on the practice board.
Dutchman Raymond van Barneveld looks to avoid a first-round exit at the hands of Queensland’s Gordon Mathers.
Barney needs to get out of third gear and show his class. I expect him to scrape through again but get beat next round. Reading his tweets and Instagram it looks like he is travelling around and not doing any practice. Not good when you’re up against hungry professionals. If Barney expects people to buy these new darts of his, then he has buck up his ideas and start performing, much like Cross he needs to go back to basics. Barney 6-4.
Kyle Anderson, Australia’s number two, has drawn qualifier Barry Gardner – a player making his TV debut. Who knows here, last week I said don’t be surprised if Anderson got beat, and I was proved right. Again I am going with the unknown Gardner to nail Anderson. Kyle is just not the player he was and either it’s the diabetes, eyesight or whatever, he needs to sort it before he doesn’t qualify for other big events during the rest of the year. Gardner 6-4.
The darts kick off  on Friday in Brisbane with delayed footage on ITV4 at 7pm in the UK.
Friday August 17
First Round
Michael Smith v Raymond Smith
Raymond van Barneveld v Gordon Mathers
Kyle Anderson v Barry Gardner
Peter Wright v Justin Thompson
Rob Cross v Tim Pusey
Michael van Gerwen v Mark Cleaver
Simon Whitlock v Corey Cadby
Gary Anderson v Damon Heta
Brisbane Darts Masters 2018