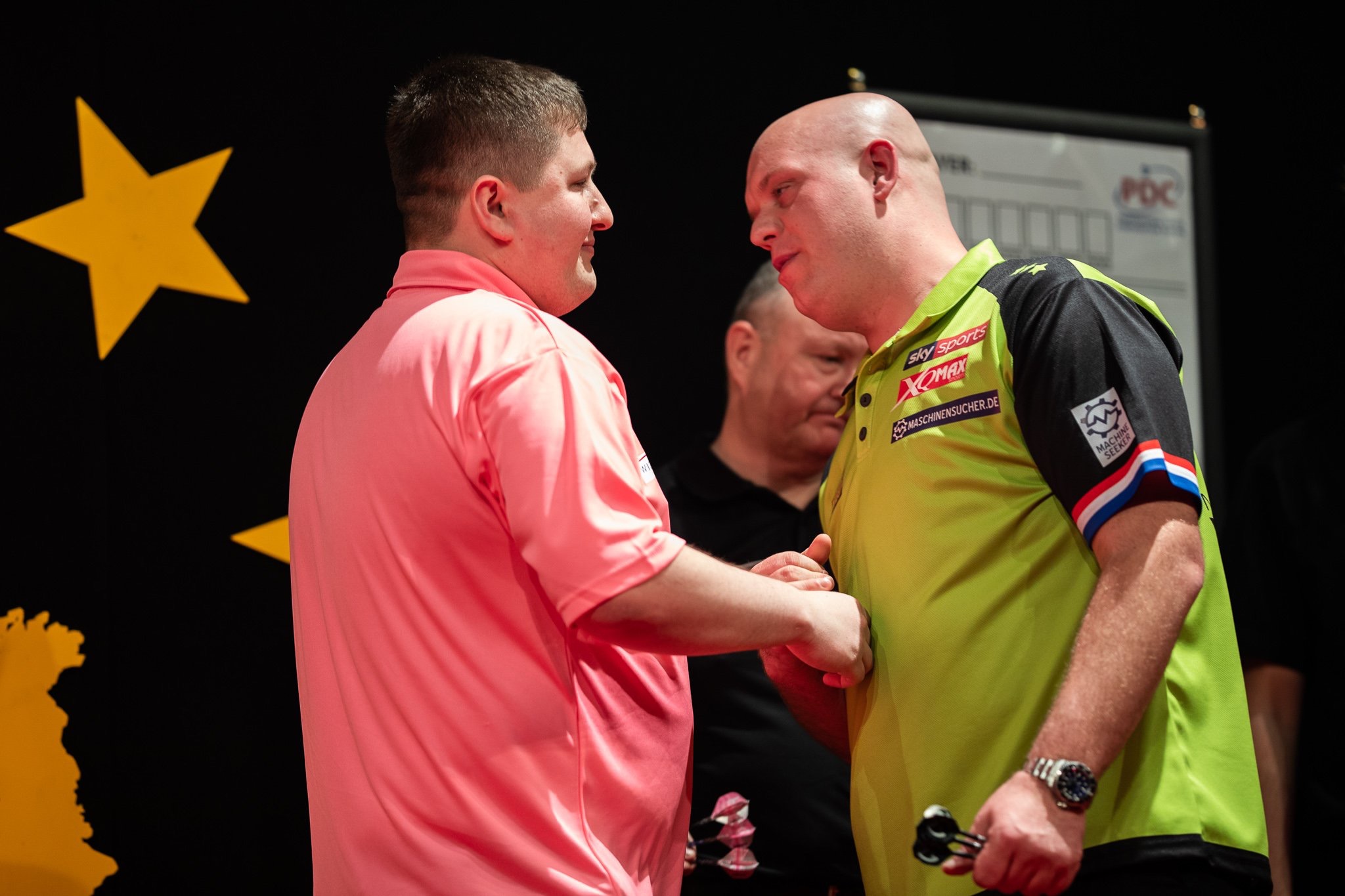 Keegan Brown pulled off a finishing masterclass as he dumped defending champion, Michael van Gerwen, out of the tournament, while Ian White denied Jamie Hughes in a European Tour thriller at Halle 39 in Hildesheim.

Brown had only beaten the world number one on one occasion prior to his sensational showing on Saturday evening, but six out of six on the outer ring and 104.12 average helped the Isle of Wight-based ace secure his place in the third round of the German Darts Championship.

The first eight legs went with throw in a high-quality affair, but an 11-darter handed Brown a break of throw and moved the former World Youth Champion on the cusp of victory. A 92 checkout with ‘Mighty Mike’ sat on 114 sealed the deal for Brown as he progressed to the final day, and deny a 108.1 average from van Gerwen.

Ian White came from 3-1 down to claim a hard-fought win over Jamie Hughes. Tipton-based Hughes raced out of the gates and was averaging around 110 for the majority of the match, but White hung in there and gained a needed victory following last weekend’s second round exit at the hands of Justin Pipe.

Joe Cullen denied newly-crowned UK Open champion, Nathan Aspinall, in a close contest with both players averaging over the 101 mark for the duration of the match.

Stockport’s Aspinall levelled up proceedings, however two in succession from Cullen pulled ‘The Rockstar’ through to the third round.

Elsewhere, Rob Cross continued his terrific form following his run to the final at last weekend’s European Darts Open as he averaged 99.96 in a 6-4 victory over Ron Meulenkamp. The Dutchman himself averaged 97.66 and hit four out of his six attempts at double, but it wasn’t enough against a clinical Cross.

Gerwyn Price denied a confident Mark Dudbridge to progress to round three in Hildesheim. The Welshman hit 75% on the doubles in a comfortable win to setup a Sunday afternoon meeting with Jonny Clayton who hit five maximums in seeing off UK Open quarter-finalist, Simon Stevenson.

Adrian Lewis silenced the German faithful as he dumped out Kevin Knopf, who was making his European Tour debut after attempting to do so 26 times in the host nation qualifiers. Two-time World Champion, Lewis, was far from his best, averaging just 87.39, but it was enough to beat a below-par Knopf.

Peter Wright setup a last 16 meeting with Jermaine Wattimena after he claimed a routine 6-3 victory over fellow East Anglian, Andrew Gilding, while his Premier League rival, James Wade, breezed through with a 6-1 win over Russia’s Boris Koltsov.

Darren Webster survived one match dart as he claimed a narrow victory at the hands of World Championship quarter-finalist, Luke Humphries. Following eight holds of throw and two breaks, the pair traded maximums in the final leg, before Humphries squandering a dart at double 16 and handing Webster a 6-5 triumph.

Last year’s German Darts Championship finalist, James Wilson, survived a missed match dart from Mario Robbe, before edging through the deciding leg of their clash on double one.

Wilson came from 2-0 down, taking out 118 along the way, before Robbe posted a 120 finish and then took two successive legs from 5-3 down to take the game all the way, only for ‘Jammie Dogder’ to close out a narrow win on the dreaded double one.

Ricky Evans battled back from behind to earn a place in Sunday’s final day, following a 6-4 victory over Mensur Suljovic. The Austrian has enjoyed a fairly successful Premier League campaign, but he couldn’t emulate that form against the fastest thrower in world darts as he missed 18 darts at double and came out on wrong end.

Dave Chisnall joined van Gerwen in the seeded players to endure defeat as he suffered a 6-3 loss to Mervyn King, while Daryl Gurney thrashed Andy Boulton 6-1 in Hildesheim.

The action will resume at Halle 39 from 12pm on Sunday with the last 16 playing down to the final and a new winner on the 2019 European Tour being crowned following the departure of European Darts Open champion, Michael van Gerwen.