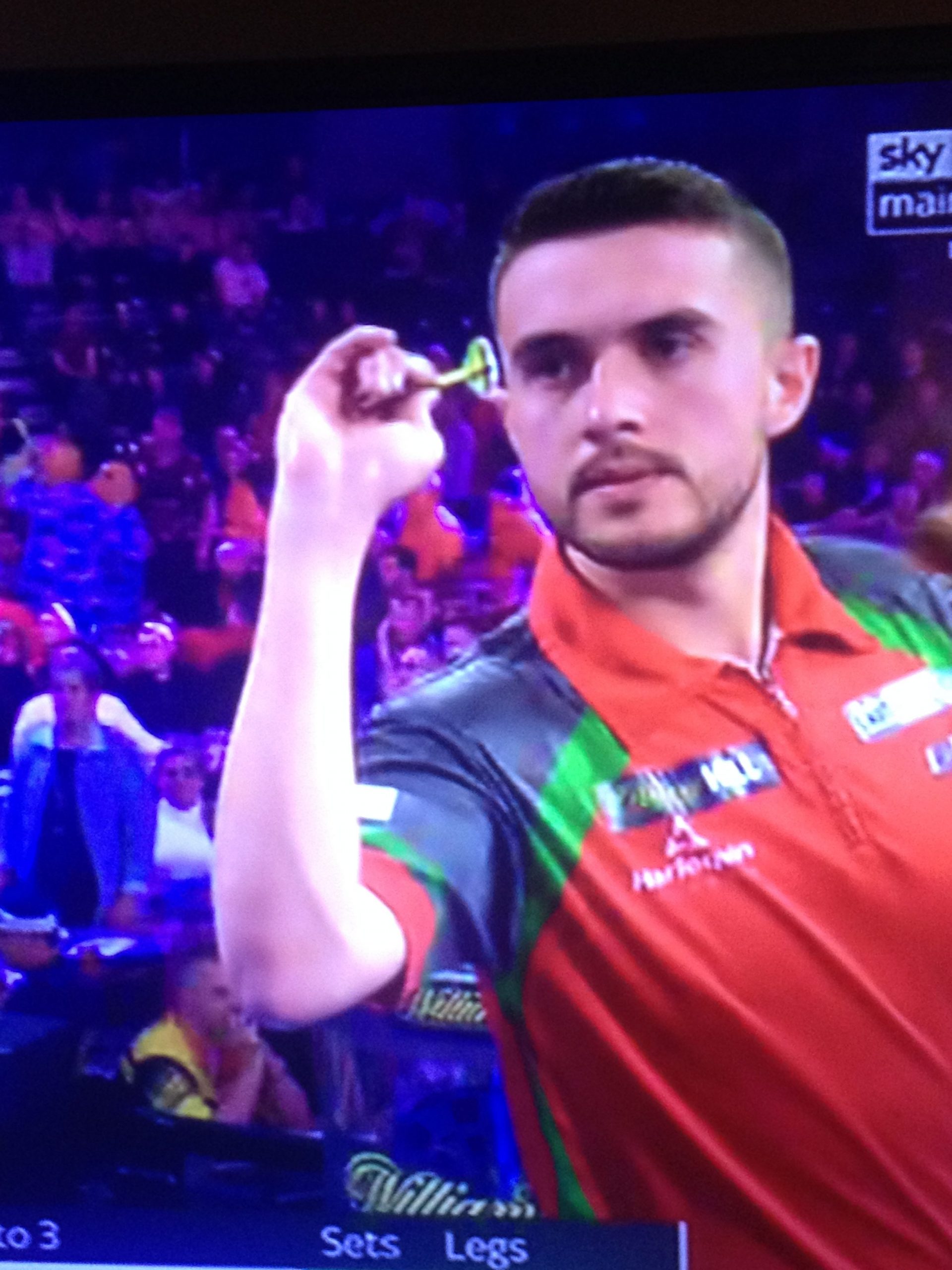 Jamie Lewis and Paul Nicholson were the star attractions as Day 2 of the PDC World Darts Championships began with the afternoon session on Friday 14th December.

The opening match was between Michael Barnard and Jose de Sousa of Portugal. De Sousa qualified for Ally Pally having won the South West Europe qualifier, but Challenge Tour winner Barnard started as big favourite. The Portuguese man won the bull, and the first 3 legs went on throw. De Sousa missed 3 set darts on double 10 in the fourth leg, and it went on to cost him as Michael Barnard levelled at 2-2. The deciding leg was tense, as Jose missed another set dart to finish 116. Michael punished him by taking out a crucial 71 with his last dart at double 8 to take the first set against the darts. Barnard opened the second set with a brilliant 82 finish with Bull-Double 16. In the second leg, Jose de Sousa threw 2 brilliant 180s to set up the 141. The treble 20 followed, but he wired treble 19 to the disappointment of the Alexandra Palace crowd. Jose would hold his nerve to level the set up at 1 a piece on double 18. Barnard took the lead again, but de Sousa saved the set with a superb 121 checkout on double 18 to bring the set to another decider. It was an extremely close leg, but de Sousa had the first darts at double. However, he missed 2 set darts to leave Barnard a clear shot at tops which he duly took. Jose had darts to win both sets, but it was Barnard who led 2-0. Onto the 3rd set and once again the opening couple of legs were held on throw. In the 3rd leg, Michael hit what looked to be the decisive blow, breaking Jose’s throw in 14 darts to go within one leg of the match. However, de Sousa was not finished yet, breaking back with a 57 checkout to send us to yet another deciding leg. This time, the Portuguese man held his nerve, throwing a superb 13 darter under the circumstances to take the set and make it 2-1. Barnard’s scoring seemed to hit a wall and all of a sudden, Jose de Sousa had broken his throw and led 2-0 in the fourth set. Michael held to make it 2-1, leaving it up to Jose to throw and make it 2 all in sets. Barnard missed a dart at 115 to make the set 2 a piece, allowing Jose de Sousa to nail the double 4 with his last dart to level the match at 2 all. With no tiebreak in the first round, Jose had the advantage of throw, as well as the momentum having won the previous 2 sets. Jose took the lead for the first time since the opening set, when he hit double 4 yet again to go within 2 legs of the match. Michael nailed an absolutely crucial 116 checkout to make the set 1-1, and effectively create a best of 3 situation. Jose held to lead again, but Barnard replied brilliantly to create a deciding leg to see who goes through to the second round. It was to prove to be one of the most dramatic deciding legs ever seen at the World Championships. Jose threw a superb 140 to leave 61, but would proceed to miss an incredible 6 match darts at doubles 18, 9, 4 and 2, allowing Michael Barnard to punish once again and win a brilliant match on double 16. Perhaps Jose had the better of the scoring, but Michael was ice cool on the doubles, and it was his ability to punish de Sousa’s misses that proved to be the match winner, an asset that could be crucial in his next game against Jermaine Wattimena.

The next game was between ‘The Saint’ Alan Tabern and the Aussie Raymond Smith. Tabern was making his first appearance at Ally Pally since 2012, while Raymond was making his PDC World Championships debut, with the prize for the winner a tie with the World number 1 Michael van Gerwen. Alan opened up with a a fantastic 101 checkout against the darts, followed by a hold to lead 2-0. Raymond held to make it 2-1, but Tabern won the first set confidently with an excellent 15 darter to lead 1-0. Tabern held again to start the second set before breaking Smith again to lead the set 2-0. Raymond held his nerve to make it 2-1 again, but Alan was not to be stopped, nailing 71 on the bull to lead 2-0 in sets. Smith led the 3rd set after a bizarre 104 finish on double 7. 2 consecutive holds followed as the advantage remained with Smith. The Saint brought the set to a decider on double 10, going within a leg of the match. Smith kicked the leg with a maximum, but missed 6 set darts, giving Tabern shots at tops and then double 5. However, he missed an incredible 6 match darts, allowing Raymond to take the set on madhouse and make it 2-1 and well and truly game on. Smith continued the momentum to break Tabern’s darts, and then held to make it 2-0.
Alan hit back by holding in 14, forcing Raymond to serve out. Smith duly did serve out and level the match, taking out a wonderful 104, this time the conventional way, while Alan was waiting on 41. The match went all the way to a deciding set, and Raymond had the advantage of throw. However, Smith did not hold the advantage for long, as Tabern broke to lead 1-0. Tabern held with a wonderful 14 darter to go within a leg of booking a tie with Van Gerwen, and he duly did, as Raymond missed 6 darts at double, allowing Alan Tabern to take out 64 on tops to take another 5 set match.

The eagerly anticipated return of Paul Nicholson to the Alexandra Palace oche for the first time since 2015 followed, as The Asset took on tour card holder from County Down, Kevin Burness. Burness flew out of the blocks, but the first leg was interrupted by the lights going off, forcing the players to leave the stage for a couple of minutes. The first couple of legs were shared on throw, but it was Nicholson who unleashed the first blow, breaking Burness’ throw to lead the set 2-1. Kevin responded brilliantly, having survived 2 set darts from The Asset, he took out 100 in 2 darts to send the set to a decider. Nicholson missed another dart for the set, this time at the bullseye, and Burness punished again, nailing tops again to lead 1-0. Kevin started the 2nd set in brilliant fashion again, taking out a magic 104 on double 12 to break The Asset’s throw. Kevin held on double 4 to go within a leg of a 2-0 lead. Burness would miss 4 set darts, including one at tops on the 154, allowing Paul to hold and make it 2-1. This was only a minor interruption for The Iron Man, who hit double 8 to lead 2-0 in sets, giving him the opportunity to throw out the match on his Ally Pally debut. Kevin held brilliantly with his 3rd ton plus checkout, this time on 106 to go within 2 legs of the match. Another ruthless finish from Kevin Burness, this time 88, punished a snatch from Nicholson into the 1 while throwing at tops, and brought Kevin within one leg of the match. The Iron Man missed 3 match darts, and Paul nailed double 4 to at least extend the match. But his reprieve would not last long, as Kevin threw a sublime 14 darter to close the set out and whitewash Paul 3-0 in sets. It was a memorable debut for Kevin Burness, and it gave him a chance to play Gary Anderson later tonight.

The final game of the afternoon session was a Round 2 tie, as last year’s semi finalist Jamie Lewis took on Cody Harris, the man who put away Martin Schindler last night. The first 3 legs all went with throw, after Lewis won the bullseye. The Welsh man dealt the first big blow, taking out an impressive 84 on double 6 to break Harris’ throw and lead the match 1-0. The opening legs of the second set were shared on throw, but once again Jamie Lewis took the initiative, breaking Harris with a fabulous 98 checkout on double 12. He held his throw brilliantly with a 13 darter to close out the second set and lead 2-0. Once again, the first couple of legs of the set were shared on throw. Jamie Lewis held on double 16 to go within a leg of winning, but Harris was not finished, bringing the set to a decider. The New Zealander was not to be denied a set, punishing a poor leg from the Welsh man to make it 2-1. In the opening leg of the 4th set, Lewis missed 2 darts to break the Harris throw, but it was Cody who led 1-0. Jamie took out a brilliant 119 to level the set up, but Harris held again to lead 2-1. Jamie levelled again with a brilliant double 16 to create another deciding leg. Cody had the darts, and with a 180 set up a fabulous 15 darter to level the match at 2-2. Jamie hit double 8 to hold the opening leg, before nailing a crucial double 4 with his last dart to break Cody’s throw and lead the final set 2-0. This gave Jamie Lewis the chance to finish off a brilliant win, surviving a superb Cody Harris fight back win 3-2 and progress to the Last 32.