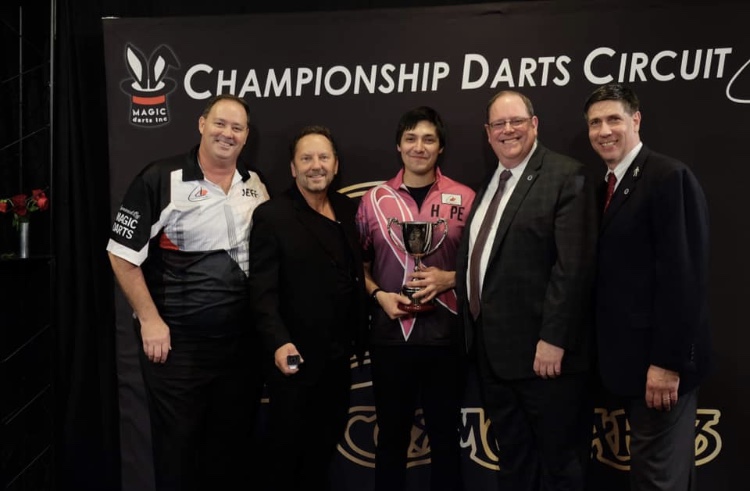 It’s now just a matter of weeks prior to Matt Campbell, Danny Baggish and Darin Young travelling across the Atlantic with the purpose of representing not only North American darts, but also the high-flying Championship Darts Circuit.

The aforementioned Campbell and Young were the most consistent throughout the year on the CDC’s Main Tour, while Baggish was crowned North American champion in Las Vegas.

Jeff Goode, who is Chief Administrative Officer and Venue Director within the CDC system, is one of the many experts that allow North America’s recently developed, elite darts tour to function like clockwork – in a professional environment.

Goode discuses this weekend’s inaugural Costa Rica Masters, the changes to the CDC calendar for 2020 as well as the ‘hybrid’ World Championship qualification process for 2021.

YOU’VE OBVIOUSLY GOT THE FIRST INTERNATIONAL TOURNAMENT TO BE HELD IN COSTA RICA COMING UP. HOW DID THIS TOURNAMENT COME ABOUT AND WHAT DO YOU HOPE TO ACHIEVE FROM IT?

Costa Rica has had a league out of San Jose for over 25 years and a couple of the long-standing administrators and top players came together to try and promote Costa Rican darts to the world and to show their level of play.

Diego, Alex, Armando and others here in Costa Rica, thought that I might be able to help them in running the tournament and getting some international attention to the tournament.

As friends we have brought the tournament together and we look forward to the inaugural kick-off this weekend.

THE WINNER WILL RECEIVE A CDC TOUR CARD, IS IT IN AMONGST YOUR PLANS TO EVENTUALLY EXPAND THE CDC INTO THE SOUTH AND CENTRAL AMERICA REGION?

Right now, I don’t think we have any plans for expanding into Central and South America as they have their avenues for PDC World Championship qualification in place and the size of our current footprint in the USA and Canada is difficult enough to manage as it is because of its size.

This was more about offering an opportunity to a top player from Costa Rica the chance to develop their game at a higher level and to compete against the top players in North America.

THE CDC RECENTLY RELEASED THE 2020 CALENDAR AND THEN PULLED IT DOWN AGAIN, WHY WAS THIS?

Firstly, we had some scheduling conflicts with long-standing events that we didn’t catch when putting the schedule together. We’ve always tried to avoid competing against major local events.

However, all players are welcome to play all of the events and all points accrued regardless of venue will count towards the two-year Order of Merit used for seeding and to fill the US and Canadian World Cup teams – should there be spots available.

Now that these two issues have been resolved, the updated calendar has been released and we are working on finalising venues.

CANADA IS SET TO BE A MORE REGULAR OCCURRENCE AS OF NEXT YEAR, WHAT ARE YOUR THOUGHTS ON THIS?

The Canadian expansion has been in the works for some time now, and they of course deserve a larger role in the CDC and our development.

There are a lot of amazing players that we haven’t seen on the tour yet and we look forward to having them on the tour this year.

THE CDC IS NOW INSTRUMENTAL FOR BOTH WORLD CHAMPIONSHIP AND US DARTS MASTERS QUALIFICATION, WAS WORKING ALONGSIDE THE PDC THE CDC’S MAIN OBJECTIVE WHEN STARTING OUT AS A CORPORATION?

As a professional-calibre darts tour in North America, our goals have always been to provide top-level opportunities for top-level players.

Was it a goal to be able to partner with the PDC? Of course. They embody the best of the best in professional darts on the planet and it only enhances our tours to have the opportunities that the partnership has made available.

That being said, we are our own entity with our own identity – which provides the freedom to try things that might not work elsewhere.

DO YOU BELIEVE PDC TOUR CARDS SHOHLD BE AWARDED TO THE TOP AMERICAN AND CANADIAN ON THE MAIN TOUR RANKINGS COME THE END OF THE YEAR?

I don’t know if there will ever be a PDC tour card offered to the top American and Canadian based on the CDC Order of Merit or points list honestly, as the tours are so vastly different.

We’ll see where things lead, but for right now we’re certainly satisfied with where we stand.

WHAT WAS THE THOUGHT PROCESS BEHIND CHANGING THE WORLD CHAMPIONSHIP QUALIFYING SYSTEM? FOR INSTANCE ONLY ALLOWING AMERICAN PLAYERS TO SCORE POINTS IN AMERICA AND CANADIANS IN CANADA.

Given our significant geographic expansion in 2020 and the sometimes excessive cost and burden of trans-border travel, we felt that creating this ‘hybrid’ tour was the best solution. Player feedback also steered us toward this decision.

Basically, if you’re a player who only has eyes on the World Championship spot and don’t have the resources to travel to six weekends across two vast countries, you can play only the events in your home country to give yourself a shot at that prize.

However, if you’re a player that truly wants a chance at every opportunity the CDC offers and the highest seed possible along the road, you need to commit to two or three cross-border events to have a legitimate shot at things like the World Cup and a top ten seed.

WHERE DO YOU SEE THE FUTURE OF THE CHAMPIONSHIP DARTS CIRCUIT?

After year five, I think I can honestly say that I see the CDC as the only avenue for North American players to participate in the PDC World Cup and World Championships long into the future.

I also see the CDC as the driving force behind the evolution of youth darts in North America, in conjunction with our outstanding partners at JDC [Junior Darts Corporation].

After all, our mission is to find the first North American world champion and that won’t happen if we just work with established talent. We need to inspire the next generation of players in order to be successful.