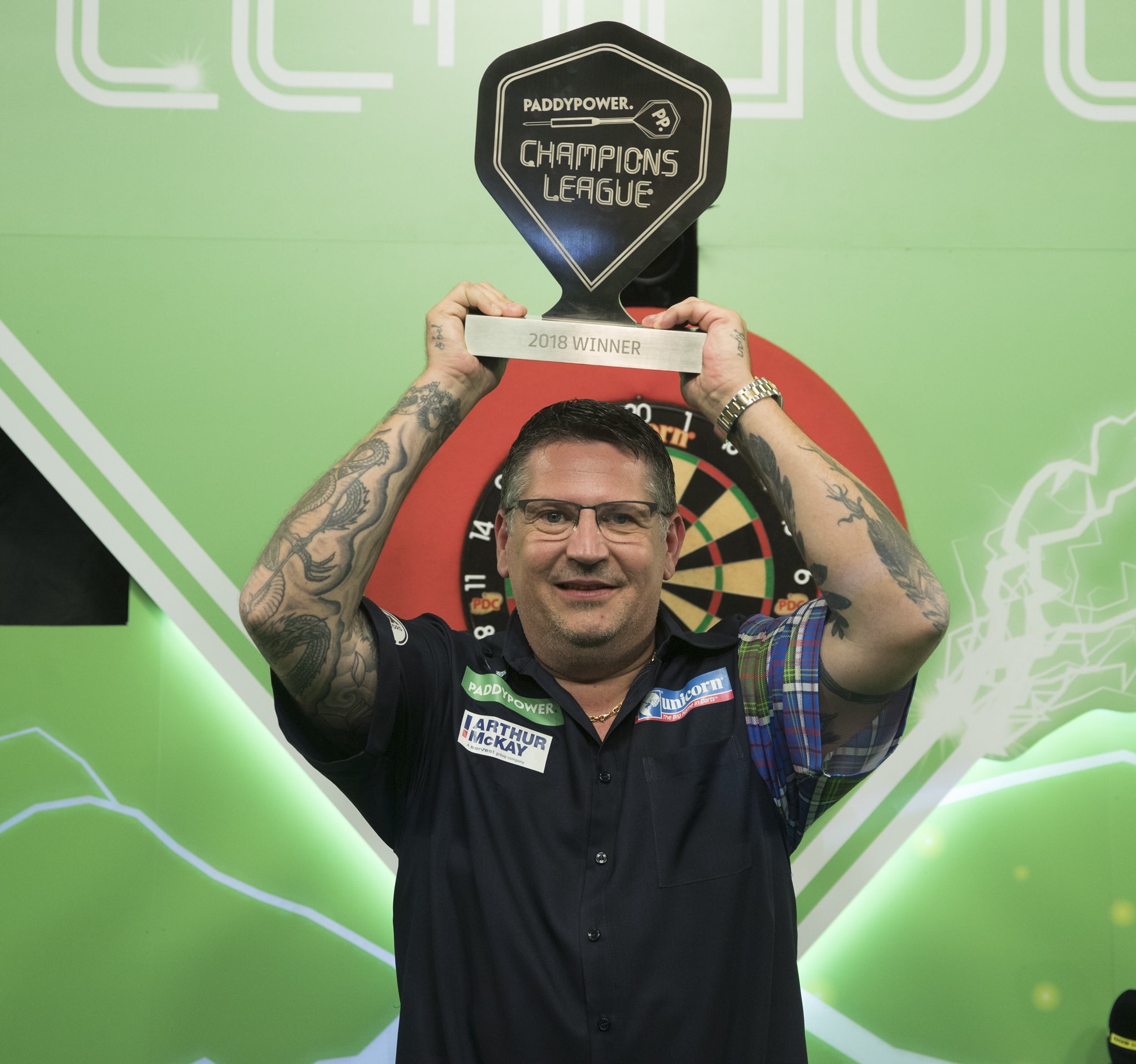 Gary Anderson won his fourth televised title of the year after he defeated Peter Wright 11-4 to conclude a scintillating final day in the Champions League of Darts.

‘The Flying Scotsman’ was so, so close to being knocked out in the group phase, but Michael van Gerwen missed two darts to beat him and he never looked back from there, averaging over 101 in both the semi-final and final to become the third different winner of the Champions League in its three editions so far. A notable mention must also go to Peter Wright, who came back from 4-1 and 8-5 down to beat the world number one van Gerwen 11-9 with an incredible finishing display, 79% to be precise.

The concluding day in Brighton got underway with the defending champion, Mensur Suljović, against Simon Whitlock, and it was ‘The Gentle’ who extended his unbeaten run in the competition to eight games and sealed his spot at the top of Group A with a dominant 10-1 win. ‘The Wizard’ didn’t do too much wrong over the course of the two days on the south coast, but that shows the current strength of the PDC that he failed to win a match. The next game had much more riding on it – it was a winner takes all shoot-out between Peter Wright and Rob Cross. The trend from Saturday carried on though, with ‘Snakebite’ averaging over 100 and ‘Voltage’ finding himself at around 10 points beneath that, which meant a comfortable 10-3 success for the former UK Open champion.

Group B then came to a close, with multiple permutations still in play, and Daryl Gurney did his job by beating Dave Chisnall 10-7, despite a much-improved performance from ‘Chizzy’. Gurney knew he would definitely be through if van Gerwen beat Anderson in the final game of the afternoon, and Chisnall can take a few positives from this game into the World Grand Prix next week and a first round match-up with Max Hopp. The most eye-catching encounter of the event so far saw probably the best two players in the world at this moment in time go head to head. Van Gerwen only needed one leg to qualify, and he got that almost immediately but it was Anderson who went into the break with a comfortable 7-3 advantage. He went off the boil though and MVG brought it back to a deciding leg, securing his place as group winner in the process. The world number one missed two darts at 76 to win 10-9 and send Anderson packing, but ‘The Flying Scotsman’ took out 140 out of nowhere to progress at the expense of Daryl Gurney and set up a repeat of last year’s final against Suljović. The other last four match-up would see van Gerwen play Wright.

And so, two days of stunning darts all came down to three games on Sunday evening to see who would be crowned 2018 Champions League of Darts winner. The result of the first semi-final meant there would be a new name on the trophy as Gary Anderson produced a 102.26 average to see off Mensur Suljović 11-4. Another encouraging tournament from ‘The Gentle’ though, who is arguably among the top four players in the PDC right now. That game saw his unbeaten run in the Champions League come to an end and sealed a fourth TV final for ‘The Flying Scotsman’ in 2018 already. It looked like there would be a fitting finale to the event with van Gerwen and Anderson facing off as MVG stormed into a seemingly secure lead in denying a 110-plus average from Peter Wright with a stunning display. However, ‘Snakebite’ finally got the rewards for his incredible scoring when the doubling chances started falling to him, and he went on an incredibly clinical run of finishing to go from 5-2 down to 9-8 in front. He sealed it with a 92 checkout to make it an all Scottish final and beat MVG on TV for the fourth time this year – quite incredible.

It seemed Wright had ran out of steam in the final though as Gary Anderson moved 6-1 ahead. The world number two got a few legs back, but an amazing three 10-darters in the final alone helped to seal Anderson’s 8th title of 2018 and his first Champions League trophy. Another high-quality event put on by the PDC, and the roadshow rolls on to Dublin next week for the UK Qualifier for the Euro Tour in Göttingen, two Players Championships, and then arguably the third biggest tournament on the circuit. The World Grand Prix is anyone’s to take based on this weekend – van Gerwen will probably be slight favourite but Anderson, Wright and Suljović are all big contenders. If it’s anything like today’s play in Brighton, it will be an event to behold at the Citywest.

Around The Boards: A roundup of all this week’s darting action