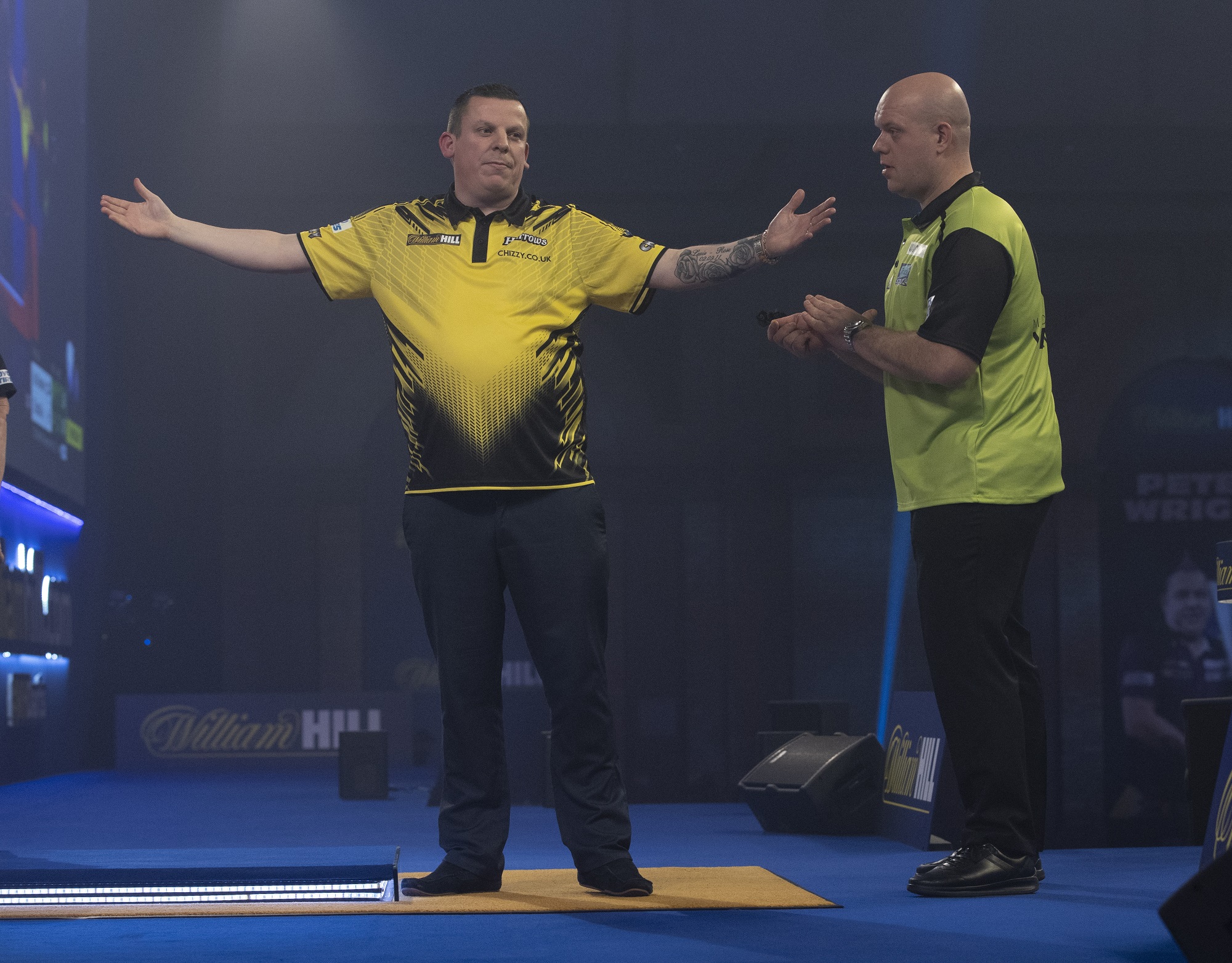 It was a blistering performance from world number eight Chisnall as he recorded a scintillating average in excess of the 107 mark and obliterated the three-time world champion without response.

Chisnall was exceptional from the outset, landing four maximums and combination checkouts of 46, 95 and 141 in the opening set to gain the advantage in the early exchanges.

After closing out the opener in a mere 35 darts, the multiple-time major finalist fended off a comeback in the second set to double his advantage, with two treble-less visits costing Van Gerwen in the decider.

Both players proceeded to execute ton-plus checkouts in the subsequent set, though, Chisnall remained composed and converted a clutch 86 checkout to move 3-0 in front and two sets away from an historic victory.

Van Gerwen’s usual stunning scoring power continued to elude him, while Chisnall persisted in peppering the trebles, and eventually moved on the cusp of success following an hysterical leg of darts.

Chisnall narrowly missed double 12 for the second nine-darter of the tournament, and Van Gerwen fired home a laughable 141 shot of own – including the double 12 – to leave tops, before his opponent pinned double six for an 11-dart leg.

It was subsequently plain-sailing in the fifth set for the St Helens man as he found combination finishes of 80, 87 and 130 on the bullseye to wrap up an inspired triumph.

Chisnall’s victory was a tremendous way to end his staggering 27-match winless streak against the world number one, with two-time world champion Gary Anderson awaiting him in the semi-finals.

Anderson remains the only former winner within the final four, as the Scotsman convincingly overcame Dirk van Duijvenbode, averaging over the 102 mark.

Van Duijvenbode raced out of the blocks, completing a hat-trick of 14-darters to immediately gain the ascendancy, but his standards slipped and Anderson drastically improved.

‘The Flying Scotsman’ reeled off five legs in succession to turn the tables, and that soon became eight on the bounce as Anderson established a two-set advantage.

An impressive 127 checkout on double eight and three maximums were landed by Anderson in set four, before combination checkouts of 60 and 131 moved the 50-year-old on the brink of a 4-1 advantage.

Van Duijvenbode ended his drought with a 14-darter, but his fortunates were short lived as the Dutchman’s finishing evaded him, gifting Anderson an opportunity at double ten which he grasped with both hands and continued his race to victory.

A 109 checkout to break the throw in the sixth set kept the World Grand Prix runner-up’s imperceptible hopes alive, though, Anderson completed legs of 13 and 14 darts to book his place in the semi-finals.

Price, a winner of four televised titles, was forced to fend off multiple comebacks from the two-time major winner, before eventually sealing his place in the semi-finals for the second successive year.

Price was breathtaking in the early exchanges, dropping a solitary leg in the opening two sets on his way to constructing a 2-0 advantage, mounting the pressure on the shoulders of Gurney in the process.

Gurney lived up to expectations though, pinning impressive finishes of 73 and 75 to halve the deficit, before restoring parity at two apiece thanks to a number of spurned darts on the doubles from the Welshman.

However, the stalemate status remained for a mere few heartbeats, as Price proceeded to re-establish his two-set advantage, with a 143 finish to snatch set five proving a particular turning point.

With Price leading 4-2 in the contest, Gurney’s hopes were fading away. Nevertheless, the Northern Irishman formed another spirited fight back, reeling off six successive legs to force a deciding set.

Both players converted potentially crucial ton-plus checkouts in the decider, with the match eventually reaching its final possible leg, in which Gurney failed to take out 108 and Price pounced on his favourite double tops.

Price will face Stephen Bunting on Saturday after former BDO world champion stunned Poland’s Krzysztof Ratajski to reach the semi-finals at Alexandra Palace for the first time in his career.

Ratajski landed a clutch 106 checkout in the first leg of the contest, but his opening set showing soon slumped, squandering multiple darts on the doubles and therefore allowing Bunting to draw first blood.

Frustrations began to appear in the mannerisms of the usually poker-faced Pole, as the former Premier League star subsequently upped the ante and doubled his advantage with legs of 12, 13 and 14 darts.

Bunting continued to average in excess of the 100 mark, and produced a magnificent 13-darter to edge a relatively close third set, but Ratajski soon got on the board and reduced the deficit.

A dart at double 16 to move four sets in front was squandered by Bunting, and ‘The Polish Eagle’ swooped on the opportunity, landing his favourite double eight to move within two sets of his firing opponent.

Ratajski was soon in a prime position to turn the match on its head, constructing a 2-0 advantage in the fifth set. Nevertheless, Bunting failed to falter in the finishing department, converting combination checkouts of 43, 74 and 170 to lead 4-1 in sets.

The Gibraltar Darts Trophy champion teased the comeback as he reeled off two sets in succession, with a mesmerising 124 checkout on the bullseye proving a particular highlight, to move one set adrift of his underdog opponent.

However, his hopes were soon diminished as Bunting reeled off three legs in succession, converting combination finishes of 82 and 76 to reach the last four of a televised tournament for the first time in almost six years.