HomeBlogChizzy, MVG and Cullen come through high-quality affairs while seven seeds crash out in Munich 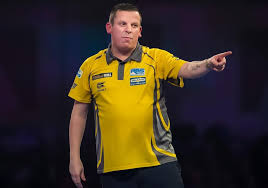 Dave Chisnall, Michael van Gerwen and Joe Cullen all progressed in eye-catching fashion on a day of shocks at the German Darts Grand Prix at the Zenith Kulturhalle in Munich.

Notably, the bottom half of the draw is completely wide open going into Monday’s final day of action with the top four seeds in that section all losing out in their first match. The day began with a bizarre game, Ian White missing an incredible 32 darts at double and allowing Czech thrower Karel Sedláček to mop up and move through to the last 16 despite an average of below 80 and a checkout percentage of 30.

Peter Wright chose not to use the springy darts which went wrong in the Premier League on Thursday, and despite a better performance, lost once more as in form Ross Smith hit half of his doubles to close out a 6-4 success and set up a meeting with Simon Whitlock. We could have seen a turning point in 2019 for ‘The Wizard’ on Sunday evening as he squeezed out every ounce of his ability in a fiery encounter with Cristo Reyes. Both players were desperate for a win, but it was the Australian who found double 2 to do that 6-4.

Winner of three of the last four PDC titles, James Wade was also beaten in Munich as a close game with Kim Huybrechts was decided by very fine margins; ‘The Machine’ missed a single match darts in the eleventh leg and the Belgian took out 70 clinically to get a vital victory. Similarly, Ritchie Edhouse was even cooler under pressure against two-time World Champion Adrian Lewis, taking out 160 in the deciding leg with ‘Jackpot’ sat on tops.

It was another agonising defeat for the Stoke man, whose luck on stage will surely turn soon. One of the more eye-catching results of the second round saw German Darts Championship finalist Ricky Evans whitewash Michael Smith, who can’t buy a win on the Euro Tour. It’s another chance for a deep run in Europe for ‘Rapid’, who will take on Ted Evetts on Monday after the Warwickshire thrower saw off Jonny Clayton 6-2, only missing three doubles in the match.

The other seed to go out at the first hurdle in Munich was the only one who will earn any ranking points from this weekend, Danny Noppert. The former Lakeside finalist was bumped up into the top 16 after the withdrawal of Gerwyn Price and failed to capitalise as Stephen Bunting continued his fine European Tour form with a 6-1 win that included two ton-plus checkouts. Talking of ton-plus, the big averages of round two mostly came in two separate matches.

Dave Chisnall was at his sensational best against Arron Monk, averaging just below 109 in a game where the pair shared nine 180s. Monk averaged 103.86 himself as he continues a promising start to 2019. It was a similar story for three-time ProTour winner Krzysztof Ratajski, who was denied in a high-quality meeting with world number one Michael van Gerwen, looking for his first title in just under a month.

MVG hit 6 of his 8 double attempts, and it could easily have been a second successive second round exit for the 29-time Euro Tour winner with Ratajski narrowly losing out on a couple of legs by the finest of margins. Both players averaged between 101 and 102.5, with the only other ton-plus on day two courtesy of Mensur Suljović, ‘The Gentle’ easing to a 6-2 win over Josh Payne and a Monday afternoon date with Dave Chisnall.

One of the picks of the second round was the game between European Tour specialist Joe Cullen and three-time Lakeside World Champion Glen Durrant. ‘Duzza’ stormed into a 3-0 lead, but Cullen’s 146 checkout was the starter for a 130 main course in a dramatic deciding leg, which left the Middlesbrough man ruing missed chances in another agonising second round defeat. There will be plenty more chances for him, while ‘The Rockstar’ has a great chance of a run in Munich with Ritchie Edhouse next up.

Cullen is arguably the favourite to reach the final from the bottom half, where he is joined by Darren Webster who beat Nathan Derry 6-1. Elsewhere, Rob Cross progressed 6-3 against Michael Rasztovits to set up a clash with the most recent Euro Tour champion Daryl Gurney, who survived a tough test from ‘The Original’ Kyle Anderson. The action continues on Monday at the Zenith Kulturhalle, where we have every chance of a third European Tour winner of three events in 2019.

However, Michael van Gerwen will be confident of making it 30 wins on the continent on the week he turns 30. The previous two deciding days on the Euro Tour this season have both seen nine-dart legs from MVG and James Wade, so it would be great if that streak continued on what will surely be a dramatic final day in Munich.

Durrant impresses as European Tour gets underway in Munich