Smith, Cullen & Petersen join Paul & Steve on this weeks ‘Behind the Bar’

Eric Bristow & Paul share their thoughts of The World Matchplay

Eric Bristow joins Paul on this weeks ‘Behind the Bar’ 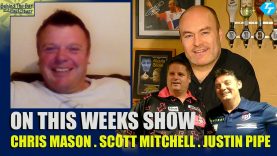 ITV darts commentator ‘Mace the Ace’ Chris Mason has a video chat with Paul Starr about The European Championship, The Grand Slam in Wolverhampton and the William Hill World Darts Championship.
‘BDO World Darts Champion’ Scott Mitchell & PDC Player Justin ‘The Force’ Pipe caught up with Paul and gives his advice to Scott for The Grand Slam of Darts.

‘Behind the Bar’ with Gary Anderson & Stephen Bunting – Part 3

The Caven’s & Steve Brown join Paul ‘Behind the Bar’