GRAND SLAM OF DARTS 2017 – FIRST ROUND MATCH PREDICTIONS – WHAT ARE YOURS?

WHICH 10 PLAYERS WOULD YOU CHOOSE FOR THE UNIBET PDC PREMIER LEAGUE DARTS 2018?

GLEN DURRANT – IS HE GOOD ENOUGH TO JOIN THE PDC? ……. WHAT DO YOU THINK?

COREY CADBY – HOW MUCH DID THE GERWYN PRICE MATCH REALLY AFFECT HIM?

PREDICTIONS ROUND 1 OF THE DARTS PLAYERS CHAMPIONSHIP FINALS – MINEHEAD BUTLINS

ROUND 2 PREDICTIONS OF THE DARTS PLAYERS CHAMPIONSHIP FINALS – MINEHEAD BUTLINS

COREY CADBY – HOW MUCH DID THE GERWYN PRICE MATCH REALLY AFFECT HIM? 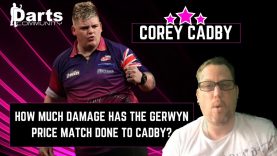 I am a huge Corey Cadby fan and have been praising him up for sometime, now, you will even see on my recent videos that I have been saying that he should have a place in the 2018 Darts Premier League…….

However since the match between him and Gerwyn Price Corey seems to have lost his confidence and edge, the Grand Slam Of Darts 2017 he was knocked out of the group stages, winning just one match and looking a shadow of his former self.

I would love to know how much you think the Gerwyn Price match recently in the World Series Darts finals affected him.

What does the next few years hold for Cadby, especially as he lost the youth final and has missed out on the Ally Pally to, he is going to Q School in January, its going to be tough.

What do you think?

Please leave your comments below, I will get back to you all as always.

WHICH 10 PLAYERS WOULD YOU CHOOSE FOR THE UNIBET PDC PREMIER LEAGUE DARTS 2018?

PREDICTIONS ROUND 1 OF THE DARTS PLAYERS CHAMPIONSHIP FINALS – MINEHEAD BUTLINS