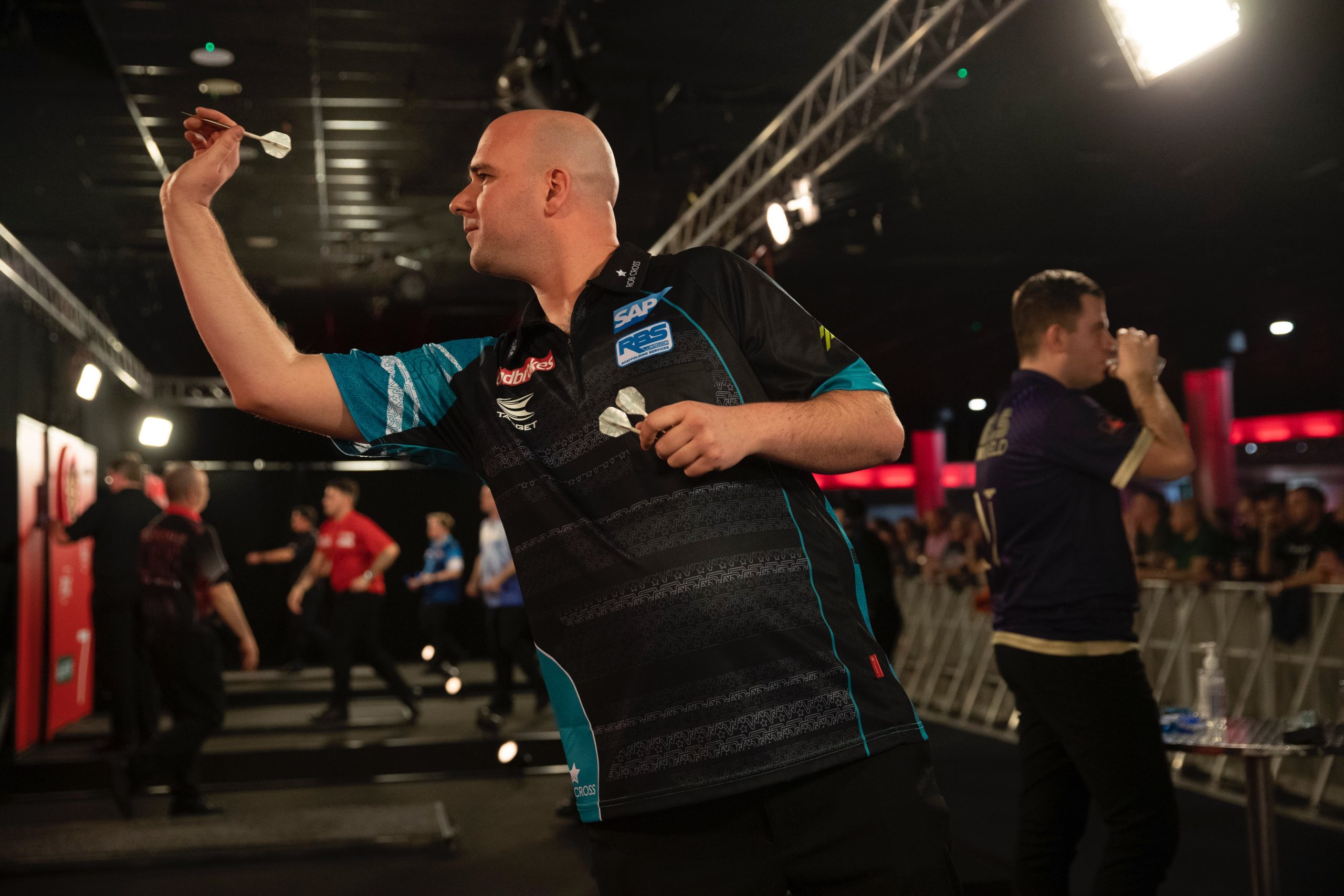 Rob Cross continued his sublime record at the Ladbrokes UK Open as he denied Michael Smith in a thrilling fifth round affair, while Michael van Gerwen, Peter Wright and Gerwyn Price also prevailed in Minehead.

Following Friday’s bumper day of action, the fifth round took place on Saturday afternoon as well as the sixth round draw for the unique multi-board tournament.

Cross, who was a beaten finalist 12 months ago at Butlin’s Minehead Resort, ended fellow Premier League star Smith’s hopes with a narrow victory over ‘Bully Boy’ in a last leg decider.

GOING ALL THE WAY!!

Michael Smith takes out 118 to level the game at 9-9 and force the deciding leg. pic.twitter.com/ley7J0C74f

Michael Smith goes really close to stealing the win but it is Rob Cross who progresses to the Last 16. pic.twitter.com/NcBaj4necP

Smith led 4-2 early on, though, Cross battled back and eventually held a three leg lead. However, clutch doubling from the St Helens man forced a deciding leg – in which he wired the bullseye for a 164 checkout, allowing Cross to pin tops and prevail.

Following a hard-fought victory, former world champion Cross will now face his management stablemate Stephen Bunting – who handed Alan Tabern a 10-2 thrashing to reach the last 16 for the third time.

What a time to miss the big number for Jason Lowe as Michael van Gerwen survives a HUGE scare here on the Main Stage! pic.twitter.com/LURmBek5aY

Michael van Gerwen will face James Wade in a mouth-watering sixth round contest after surviving a scare against West Midlands builder Jason Lowe.

Van Gerwen raced into a 5-0 lead with checkouts of 116 and 170, and was seemingly on his way to a comfortable win, before Lowe reeled off five in succession to level up proceedings. It was Lowe’s scintillating 104 checkout with his opponent sat on tops that reinstated the stalemate status.

Breaks of throw from both followed by six legs won by the player throwing first sent an intriguing match to the distance – where Lowe spurned an 86 checkout, hitting single four with his first dart, allowing the world number one to pin double five and keep his hopes of a first UK Open title for four years alive.

Van Gerwen’s sixth round opponent, Wade, cruised to victory with an emphatic 10-1 win over Belgium’s Kim Huybrechts, pinning five maximums and a 121 checkout.

Gerwyn Price and Gabriel Clemens will lock horns in an eye-opening sixth round clash following averages of around the 100 mark from both in comfortable victories over Ricky Evans and Andy Boulton respectively.

Peter Wright came from behind to see off Ian White, reeling off five legs on the bounce from 6-5 down. The reigning world champion continued his bid to lift a second UK Open crown and will face Daryl Gurney in the sixth round.

Gurney completed a quite remarkable comeback in booking his place in Saturday evening’s action as he overcame two match darts and a six-leg deficit to deny recent Premier League challenger William O’Connor.

O’Connor led 7-1 and was supposedly in cruise control, only to falter under pressure, handing Gurney the opportunity for success on his favourite double which was landed with ease.

Elsewhere, another Northern Irishman prevailed in Kyle McKinstry – who on Friday afternoon conquered the global sensation Fallon Sherrock, and now remains the only first round entrant still in the tournament.

Two-time world champion and former UK Open winner Gary Anderson reeled off five legs in succession to defeat Simon Stevenson and the boisterous contingent that had travelled in support from Plymouth.

Anderson will face Jelle Klaasen on Saturday evening after the Dutchman thrashed Steve West 10-1, and remains firmly under the radar progressing into the latter stages of the tournament dubbed the ‘FA Cup of Darts’ due to its great deal of unpredictability.

Chris Dobey beats Simon Whitlock 10-5 to book his place in the Last 16.

After coming through one of the greatest UK Open contests ever on Friday evening, Chris Dobey recorded a 98.5 average and scintillating showing in denying Australia’s Simon Whitlock.

Both Dobey and Ratajski averaged over 105 in a blistering fourth round match on the opening day – in which neither player seemed to miss, and Dobey nailed a 91 checkout on the bullseye to prevail.

In his victory over Whitlock, the Bedlington thrower began from where he left off, setting up a meeting with Jonny Clayton in the sixth round, following the Welshman’s 101.6 average in beating Joe Cullen.

The 2020 UK Open will resume on Saturday evening as the sixth round commences at the popular Butlin’s Minehead Resort.