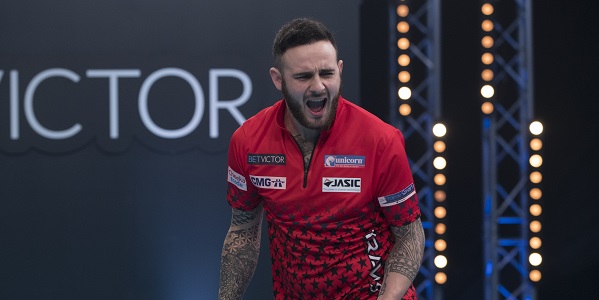 Cullen upsets Cross as Wright edges past Lewis at Masters

Rob Cross’ disappointing 2018 continued into his first PDC event of 2019 as a clinical Joe Cullen beat him 10-6 on the Yorkshireman’s Masters debut.

Saturday saw the second of three days of action at the Marshall Arena in Milton Keynes, and after Mensur Suljović produced the standout performance on day one, it was over to the likes of Cross, Michael Smith and Peter Wright to impress as round one came to a close at the showpiece event. Four-time defending champion Michael van Gerwen, Dave Chisnall and the injured Gary Anderson’s replacement, Stephen Bunting also progressed to the quarter-finals on Friday.

This tournament last year was a first outing for ‘Voltage’ since becoming PDC World Champion, and after a disappointing quarter-final exit then, barring the World Series, the only televised events he had any sort of success in were the UK Open and Premier League. That form carried on into Saturday night – Masters debutant Cullen taking a scrappy first session 4-1. After the European Championship semi-finalist missed tops for a 160 and Cross went out on 124, it seemed the Hastings man would push on and get his 2019 off to a flyer.

Although he did so to an extent, ‘The Rockstar’ went with him, consistently holding throw to lead 6-4 at the second interval. A 100 finish in two darts with Cross left on double 20 allowed Cullen to further increase his cushion, although ‘Voltage’ broke straight back before a fantastic 162 set-up shot allowed him to close the gap to 7-6. This was a real top-quality match-up at this point, with Bradford’s Cullen winning the next two legs within 25 darts, including a pivotal 107 checkout just after Cross hit a maximum to leave 44.

That left ‘The Rockstar’ one leg away from a successful Masters debut, and he sealed the win 10-6 following three missed doubles from the 2018 World Champion to leave his double success on 33%. Cullen’s 48% told the story of the match really, and he moves through to Sunday’s last eight to face James Wade. ‘The Machine’ was involved with a much-anticipated clash with Gerwyn Price, both of whom have been involved in controversial situations recently, more notably Price who was recently fined a record-breaking £21,500 for his antics at the Grand Slam of Darts.

The match got off to a flying start as the first three legs were all taken in 15 darts or less, Wade winning two of them. Price had seemingly toned down his usual celebrations slightly, but we all know he needs that adrenaline to play his best darts. They didn’t flow much in the first session, however, with Aldershot’s Wade taking a 4-1 lead. It was a typical performance from the reigning European Champion, who kept punishing mistakes from the ‘Iceman’ to move 6-1 in front.

Following a scrappy period, the quality significantly increased as a pair of 15-darters and a 12-darters from Price in amongst two 15-darters from Wade meant the score stood at 8-4 to the latter. ‘The Machine’ then went one away at 9-4, before Price threatened a comeback – a 13-dart leg reducing the deficit to 9-7. However, the Welshman missed two doubles to break once more and Wade took advantage, sealing a 10-7 success and a meeting with Joe Cullen.

The bottom quarter of the draw was arguably the most mouth-watering of the lot, apart from maybe the top section, and it was left until last in Milton Keynes. First up, good friends Michael Smith and Ian White went head to head. Stoke’s number one’s consistency meant that this was his fifth consecutive appearance at the Masters, but it turned out to be a fifth consecutive round one defeat as World finalist Smith turned on the style.

Missed doubles plagued the first session, but it was ‘The Bullyboy’ who led 3-2, before the Dutch Darts Champion came roaring back with an 11-darter in a solid spell that saw him gain level footing again at five apiece. However, Smith then showed the form that got him all the way to the final at Alexandra Palace as he reeled off five straight legs, all in 17 darts or less to take his average over 101 and already equal his best run at this event.

That set up a heavyweight quarter-final either way as Peter Wright and Adrian Lewis met late on Saturday night, two players with form seemingly heading in opposite directions. That trend continued in the early stages as an 11-darter and a 12-darter saw ‘Jackpot’ surge into a 3-0 advantage. However, he missed doubles in three of the next four legs to allow an under-par Wright to complete a turnaround and lead 4-3.

The topsy-turvy fashion of the game carried on throughout the second mini-session as the former two-time World Champion took out 101 to win his third successive leg and move ahead, 6-4. ‘Snakebite’ pegged him back to 7-6, and at that point, the game finally improved to the standard we expect from these two. A 12-darter from Lewis was followed by two 15-darters from Wright, and a clutch double 8 from the former sent the game to a decider that it had seemed to be heading towards.

Wright took advantage of having the throw as he led for the majority of the leg, but after he inexplicably missed the big number on 80, ‘Jackpot’ was allowed two match darts. However, he couldn’t find the finish, allowing the world number three to squeeze through despite averaging below 90. ‘Snakebite’ has never made it past the quarter-finals in this tournament, so that is something he’ll be hoping to do tomorrow as six other players also look to prevent Michael van Gerwen from winning a fifth consecutive Masters crown.