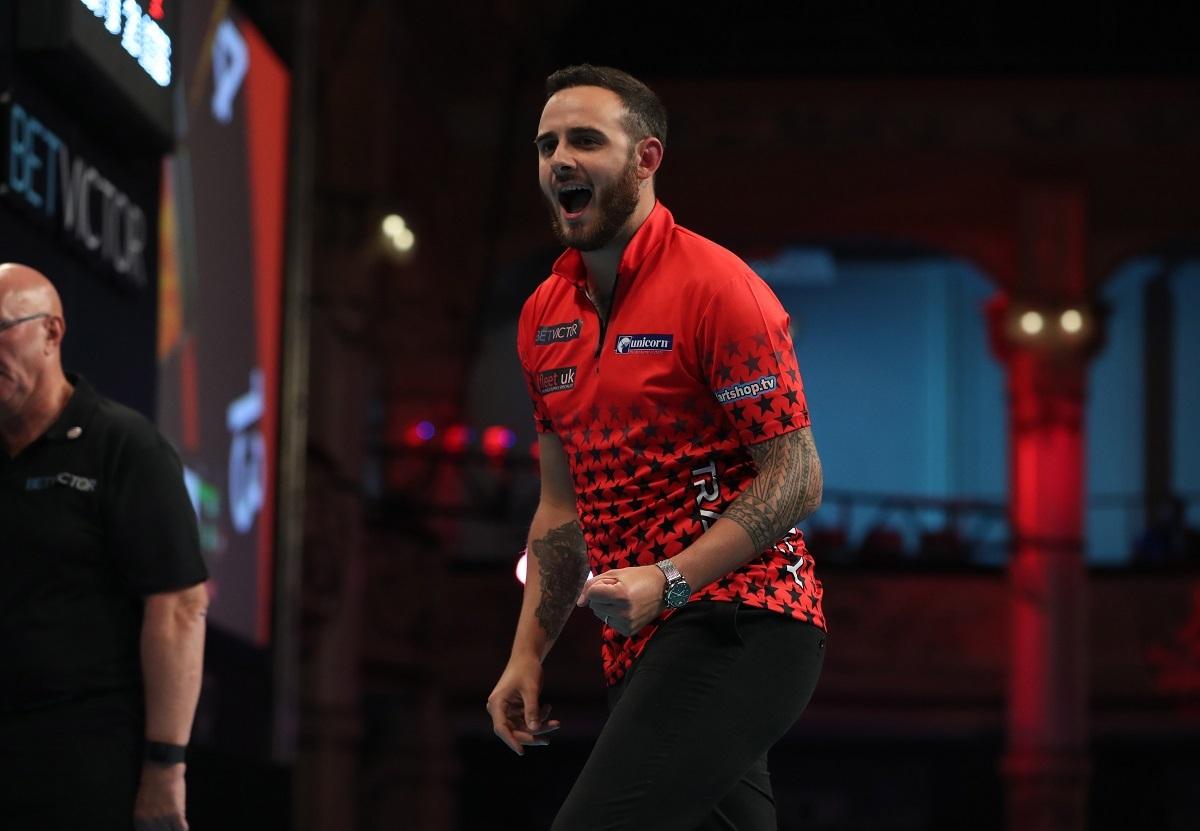 After a year where he has struggled to find his best form, a series of brilliant performances helped Joe Cullen to his first ever European Tour title at the European Darts Matchplay in Mannheim.

The fifth edition of the tournament, held at its third different venue, saw Michael van Gerwen as the defending champion with James Wade as the only person other than the world number one to take the honours. Despite a seemingly unstoppable MVG making his way through a very tough draw to a seventh Euro Tour final of 2019, it was a third final defeat in as many appearances as Cullen hardly put a foot wrong to win 8-5 and collect £25,000, but more importantly his third PDC ranking title, and first on the stage.

The eleventh European event of the season got underway on Friday with 48 players going for glory at the Maimarkthalle, and Bradley Brooks was the standout winner of the first session as ‘Bamm Bamm’ denied a 101 average from Mark McGeeney to progress on his European Tour debut. Elsewhere, Marvin Wehder and Karsten Koch delighted the home crowd, John Henderson impressed in a 6-3 win over Ryan Joyce, and Simon Whitlock was beaten by Keegan Brown.

Michael Smith finds himself in trouble concerning European Championship qualification, but he did his hopes of making it to Göttingen a favour on Friday evening with a slightly scrappy defeat of Steve Lennon, while a 170 finish for Robert Thornton wasn’t enough to deny Kim Huybrechts in a block-busting game. The Scotsman’s World Championship hopes now hang in the balance, as do his hopes of retaining his Tour Card.

On Saturday, there was a near-clean sweep for the 16 seeds as Peter Wright was the first to fall, William O’Connor boosting his European Championship ambitions, while Wayne Jones rolled back the years with a 6-3 win over Nathan Aspinall to make it to the final day of a Euro Tour for the first time in eighteen months. Michael van Gerwen beat Michael Smith 6-2 in a repeat of the World Championship final, and Mensur Suljović set up a repeat of the final in Vienna with a superb 6-1 defeat of Kim Huybrechts.

That game was first up in Sunday’s third round, and Van Gerwen turned the tables on the Austrian number one courtesy of a 105 average and a 6-4 success. Rob Cross continued his quest for a first European Tour title by seeing off Daryl Gurney 6-4, and Joe Cullen started to show glimpses of a return to form in a 6-3 win over O’Connor. Gerwyn Price and Glen Durrant had a superb tussle in Prague earlier this year, which culminated in a nine-darter for ‘The Iceman’, but he was unable to stop the three-time World Champion this time as ‘Duzza’ produced a sublime 110 average to win the game of the weekend 6-3.

Krzysztof Ratajski’s first Euro Tour event as a seed ended in quarter-final defeat to Van Gerwen, in a game with excellent scoring but clutches of missed doubles, while Dave Chisnall squeezed past Rob Cross in a bizarre game where the dartboard debate reared its ugly head once more. James Wade beat Jonny Clayton 6-4 and Joe Cullen carried on where he left off in the afternoon with a 99 average and 67% on doubles against Glen Durrant, enough for a 6-2 victory.

Chisnall’s horrific record against Van Gerwen continued as he averaged just 84 and could only muster one leg to allow the World Champion into a 40th European Tour final. Cullen provided a significant contrast to that as he finally made it to a stage final with another superb performance, only missing three doubles against Wade to set up the showpiece finale.

The first three legs were all won in 15 darts by the player throwing first, but Van Gerwen squandered chances in the fourth to allow Cullen to break and seize the initiative. That’s certainly what he did, winning the next two legs, helped significantly by his excellent treble 19 hitting. MVG gained a foothold on double 5, but ‘The Rockstar’ then took out the fourth 170 of the weekend to go within three of the title.

He started to fade, though, and allowed Van Gerwen to get level at 5-5 as the game continued at a blistering pace, but the Yorkshireman was virtually untouchable from then on, holding in 13 darts and then breaking in identical fashion to throw for the match. ‘Mighty Mike’ left 170 and scared it, narrowly missing the bull, but it was déjà vu for the world number one as like Suljović last week, Cullen won the title on a two-darter on double 14.

Van Gerwen missed vital doubles, but nothing should be taken away from an outstanding weekend for Joe Cullen, a huge win for him after a disappointing year, and what a time it could be to hit top from for ‘The Rockstar’ with two ProTour events in midweek followed by a trip to Riesa and of course all the major tournaments to come in the next few months.