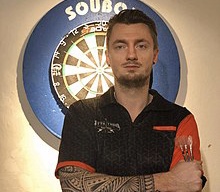 Daniel Barborak overtook Adam Gawlas at the top of the Czech Online Premier League table as the fourth and fifth nights were played out remotely.

Barborak, who recently completed a rare pairs nine-darter alongside Czech number one Karel Sedlacek, has provided further evidence that he’s one of the leading forces in Czech darts during the new initiative.

The 33-year-old gained his fourth win from five on Wednesday evening as he recorded an impressive 87.84 average, despite missing a grand total of 15 darts on the doubles in a 6-2 win over David Pisek.

He then battled back from 2-0 down to see off the emerging 29-year-old Vitezslav Sedlak, pinning checkouts of 72, 89 and 118 before a clutch 90 outshot to claim the victory.

Barborak’s only loss so far came against the PDC World Youth Championship finalist Adam Gawlas – who endured successive defeats as week two was played out.

Gawlas, 18, allowed Barborak – who lives just an hour away – to leap frog him in the table with a winless week as Sedlak and Alexander Masek pulled off impressive victories over the youngster.

37-year-old Michal Smejda also overtook Gawlas in the overall standings on leg difference as he whitewashed Masek on Wednesday, before narrowly losing out to Michal Ondo a day later.

Czech Cup winner Sedlak sits within the top four – which decides the eventual play-offs – having come through a tough week of fixtures with one point from two.

Elsewhere, Pavel Jirkal and David Rosi sit at the foot of the standings as they struggle to adapt to the standard of the inaugural Czech Online Premier League.

Jirkal, a former Czech Open champion, has struggled to live up to the expections expected of him prior to the tournament, and endured back-to-back defeats during the second week of action.

Meanwhile, Rosi ended a three-match losing streak despite remaining rock bottom of the league table, having like Jirkal lost four from five since the campaign commenced.

Rosi defeated Jirkal on Wednesday evening to gain his first point in match which could prove pivotal in deciding who finishes bottom of the table.

The Czech Online Premier League takes place on Wednesday and Thursday evenings with action streamed on bookmakers’ websites and on live television in the Czech Republic.

Click for the updated table, schedule in full and any other information regarding the Czech Online Premier League

PDC Home Tour: Wade and Clayton to feature in nights five to eight