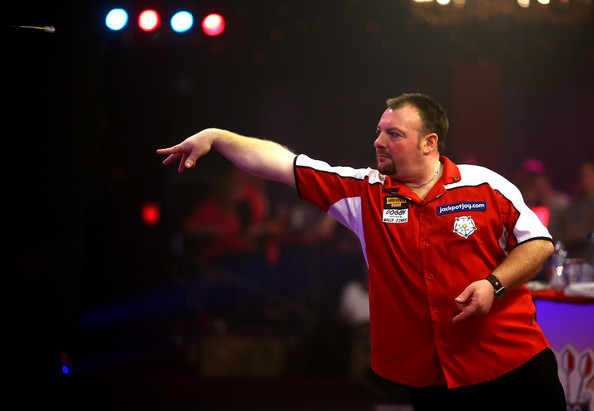 In what was one of the stories of the weekend’s action, Brian ‘Doggy’ Dawson came from almost nowhere to win his first-ever BDO ranking competition, defeating Wesley Harms 6-4 in the Category-B German Masters final.

Yorkshire’s Dawson, a three-time BDO World Championship participant, went out in the last 512 in Saturday’s German Open before winning nine games on the Sunday to take home the Masters crown and pocket the 2,000 Euros winner’s prize.

Dawson rode his luck somewhat in his last 32 meeting with Irishman Francis Carragher but won that before later securing victories over Patrick Plötz, Mario Vandenbogaerde (who won Saturday’s German Open competition), Dennis Olde Kalter and then Harms to take his maiden title.

Harms had looked in imperious form on the Sunday, dropping just three legs in his first seven victories – including a whitewash Darryl Fitton and a 4-1 win over Leighton Bennett in the last 16. Harms booked his place in the final in a last-leg decider against Jim Williams, who appeared to find some good form after a difficult start to 2019.

Belgium’s Vandenbogaerde, nicknamed ‘Super Mario’, made the headlines on Saturday with his maiden Category-A BDO title. Vandenbogaerde only came out of retirement last May but now finds himself 12th in the overall BDO rankings following another impressive showing.

The Belgian reached the last 16 stage of the Open for the loss of two legs, before producing some impressive stuff to defeat BDO world number one Richard Veenstra 4-2 and his compatriot Chris Landman by the same margin in the quarters.

Those victories set up a meeting with 13-year-old BDO World Youth champion Bennett. The prodigiously-gifted youngster had already defeated Tony Martin, Dave Parletti, Gary Stafford, Justin van Tergouw and Nick Kenny on his route to the semis, but he came up a little short in his ninth game of the day, going down 5-3.

In a final that swung both ways, Vandenbogaerde eventually saw off the talented Dutchman Martijn Kleermaker, who did the double in West Fries last month, 6-5, winning it with a 14-dart leg. The Belgian trousered 2,400 Euros for his efforts, with Kleermaker pocketing 1,200.

Kleermaker had come through the bottom half of the draw in style, seeing off Gary Stone, Brian Woods, Cody Harris and John Scott in the point-scoring stages of the competition before booking his final spot with a 5-3 semi-final triumph against home favourite Florian Hempel.

Notable by their absence this weekend were Scott Mitchell, who won the German Open competition last year, Scott Waites and the leading German talent in the BDO Michael Unterbuchner, who was in Las Vegas playing a soft-tip competition.

Aileen de Graaf returned to Kalkar as a double-defending champion, having won both competitions in 2018, but she leaves Germany this weekend with just one of her titles intact.

The Dutchwoman triumphed in Saturday’s Open competition, defeating Fallon Sherrock 4-2 in a competitive final. Entering the tournament as the second seed, de Graaf recorded a series of impressive victories on her way to the final, whitewashing Sharon Prins in the quarter-finals before beating Anastasia Dobromyslova 4-2 in the semis. For her part, Sherrock had dropped just three legs before the final, a run that saw her whitewash Deta Hedman and defeat Lisa Ashton and Corrine Hammond 4-1.

Both Sherrock and de Graaf exited the competition early on the Sunday however, crashing out in the last 64 of the Masters. Instead, that tournament was won by Australia’s Hammond, who picked up her first title on European soil since the 2017 Czech Open.

Hammond overcame Sherrock’s conqueror Vivien Czipo 4-3 in the last 16, before beating Kirsty Hutchinson and Lisa Ashton both 4-2 to book her spot in the final against good friend Lorraine Winstanley. In a tight game, Hammond prevailed 5-4 to take home the title and the 800 Euro top prize.

Vincent D’Hondt did the double in the weekend’s two disability darts competitions, picking up the Masters crown with a 3-0 defeat of Brian Felix in the final.

Next on the BDO’s European schedule are the Iceland Open and the Estonian double-header next weekend, the former being streamed via DartConnect. Beyond that, all eyes will turn to Denmark and Wales in the first two weeks of May, with two Category A and two Category A+ titles up for grabs.