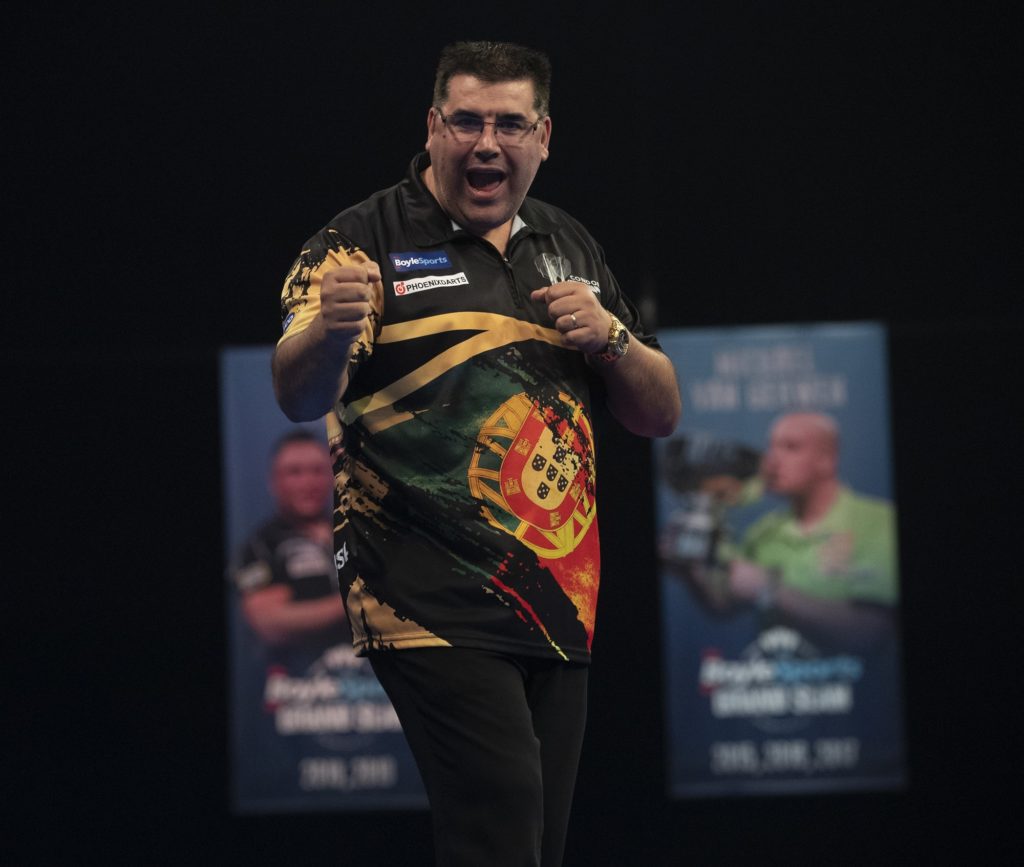 Jose de Sousa fended off a valiant comeback from Dave Chisnall, while Dimitri Van den Bergh impressed as the second round of the Grand Slam of Darts commenced in Coventry.

History was created by Portuguese sensation De Sousa as he became the first player from his country to reach a televised quarter-final on his Grand Slam debut.

Neither De Sousa nor Chisnall produced their usual scintillating standards, though, the Madrid-based man’s finishing was marginally superior which guided him into the last eight.

Chisnall claimed the opening two legs of a topsy-turvy encounter, before the recently-crowned European Darts Grand Prix champion responded with three in succession to hold a narrow advantage at the first interval.

He gained his slender lead courtesy of a rather comical moment as De Sousa appeared to lay up with 50 remaining, with Chisnall proceeding to spurn multiple darts on the outer ring.

De Sousa then entered cruise control as the Madrid-based ace reeled off six legs on the bounce to gain a hefty 8-2 advantage and move within two of the match.

Nevertheless, former finalist Chisnall battled back from the brink of defeat as he began to find his range on the outer ring to claim five consecutive legs and move within one of the prolific Portuguese thrower.

‘The Special One’ imminently fired home his fifth maximum of the contest and Chisnall’s rally was brought to a halt as De Sousa pinned back-to-back 14-darters to prevail.

Van den Bergh pinned eight maximums and his fourth consecutive ton-plus average in the tournament during a fantastic display, and faces either Gerwyn Price or Nathan Aspinall in the quarter-finals.

It was also a relatively comfortable victory for James Wade as the multiple-time major champion eased to a 10-4 victory over Ian White, averaging in excess of the 98 mark.

Both players expertly held their throw in the opening exchanges, with White registering two 13-darters, before missed doubles allowed Wade to break in the eighth leg and move 5-3 in front.

Three-time European Tour event winner White broke back with a mesmerising 85 checkout on the bullseye, but a spectacular spell from Wade handed him six legs on the spin and a place in the last eight.

Wade converted combination finishes of 41, 68 84 and 96 during his dash to the finish line, with missed darts at double here and there from White proving particularly costly.

Qualifier Adam Hunt’s inspired run in Coventry was brought to a halt as Simon Whitlock sealed his place in the quarter-finals for a fourth time at the Grand Slam.

Neither player was anywhere near their brilliant best, in a match riddled with missed attempts on the outer ring, but the scoring power of Australia’s Whitlock was marginally better.

Whitlock led throughout the contest, with missed darts at double in the sixth leg to restore parity at three apiece hindering Hunt’s hopes of progressing to a maiden major quarter-final appearance.

Hunt was from there limited to half chances at checkouts, though, the Chester-le-Street thrower pinned combination outshots of 42, 70, 89 and 115 to remain two adrift of Whitlock at 8-6.

His aspirations were soon scuppered, however, as Whitlock fired home maximums in the remaining two legs on his way to setting up a quarter-final clash against either Michael van Gerwen or Gary Anderson.

The Grand Slam of Darts continues on Saturday evening as the second round reaches its conclusion, including a mouth-watering tie between Van Gerwen and Anderson.