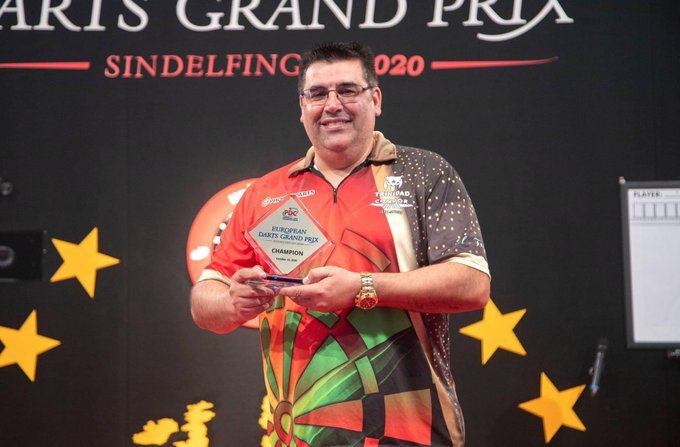 José de Sousa averaged 106 in the final to win the European Darts Grand Prix in only his third European Tour appearance.

De Sousa had beaten in-form Gerwyn Price in the third round, and after seeing off Darius Labanauskas and Ian White, he found his top level to blow away Michael van Gerwen and collect £25,000 in ranking money to move closer to a top-32 debut.

It was Van Gerwen’s first Euro Tour final of 2020, but in truth, he never found his best game in Sindelfingen and was arguably lucky to get as far as he did.

The world number one’s 17-month wait for another European Tour title goes on, and the brilliant De Sousa denied Van Gerwen a return to the top of the ProTour Order of Merit.

The evening session began with a scrappy quarter-final between White and Maik Kuivenhoven, where the Dutchman continued his tendency to produce some great legs and some very average ones.

That wasn’t enough to see off ‘Diamond’, as the Stoke thrower ran out a 6-4 winner with an average of just below 90.

De Sousa was up next against first-time European Tour quarter-finalist Labanauskas, and the Portuguese got off to a flyer with a 156 checkout.

The Lithuanian did what he had been doing all weekend, though, and hung in there at 4-4. However, ‘The Special One’ didn’t panic and took the victory 6-4.

Mensur Suljović became the third semi-finalist by whitewashing Rob Cross in straight-forward fashion. ‘Voltage’ didn’t get a dart at a double and worryingly doesn’t seem to be able to string more than one good game together.

Arguably, Van Gerwen’s best performance of the weekend came in the final quarter-final, against Nathan Aspinall. The middle part of the match was particularly impressive with the two Premier League stars exchanging blows on the way to a deciding leg.

Aspinall got match darts, but missed three of them and Van Gerwen punished him to win 6-5 with a 99 average.

The first semi-final saw a brilliant tussle between De Sousa and White as the three-time Euro Tour winner took out three ton-plus checkouts to stick with ‘The Special One’.

It went to a thirteenth and final leg, but two treble-less visits from ‘Diamond’ did the damage and allowed an 11-darter from De Sousa to wrap up the match and book a first European Tour final.

He would play Van Gerwen, who finally found his range on the doubles, hitting 7 out of 11 to thrash Suljović 7-1.

The first four legs of the final were shared before De Sousa started four consecutive legs with a 180 to lead 6-3.

‘Mighty Mike’ got one back, but the real killer blow came in the form of a 146 checkout for the Portuguese to make it 7-4, and he produced a 12-darter to seal the win and continue his incredible rise.

A third PDC title in all for the Catalonia-based thrower and a first of 2020, and it takes him inside the top 10 on the ProTour Order of Merit.

The European Tour concludes for the year next weekend with the International Darts Open in Riesa, which is swiftly followed by a trip to Oberhausen for the season-ending European Championship.