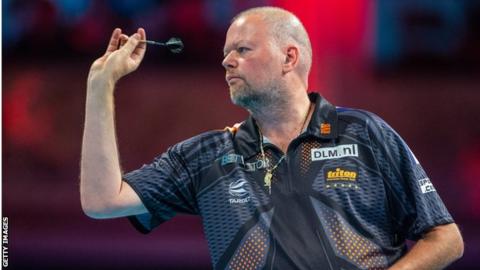 Last year’s German Darts Open champion, Max Hopp, was beaten by an inspired John Henderson on day two of the tournament in Saarbrücken, while Michael van Gerwen and Raymond van Barneveld both progressed to ensure they would meet in Sunday’s third round.

Hopp’s magical success at the Saarlandhalle twelve months ago was not to be repeated in 2019 as he was one of four seeds to crash out. John Henderson, making his first Euro Tour appearance of the year, was in control throughout the match and produced eye-catching checkouts of 140 and 160, the latter to seal a 6-3 success and a meeting with Adrian Lewis, who did enough for a fairly routine 6-3 victory over James Richardson.

Jermaine Wattimena was one of the other seeds to fall as he lost to a Raymond van Barneveld, who seems to have found some form. Using some old Unicorn darts found in a draw, the five-time World Champion knocked out home-town hero Gabriel Clemens on Friday before being pushed all the way by Wattimena despite going 4-1 ahead. ‘Barney’ gave himself the chance to seal the win in the tenth leg, but bust double 4 with his first dart to squander the opportunity, with ‘The Machine Gun’ having the throw in the decider.

However, a superb 150 visit from Wattimena wasn’t enough as RVB took out 86 to throw down the gauntlet for World Cup selection and set up a potential final showdown with Michael van Gerwen. The 30-time Euro Tour champion was nowhere near his best against Dimitri Van den Bergh, but the Belgian averaged around the 80 mark for the second successive game and MVG eased through.

The theme on Saturday was that the only seeds to go out were those who perhaps may have only been considered narrow favourites in their respective matches. Another one in that category was Jonny Clayton, who went down 6-3 to UK Open champion Nathan Aspinall, while Simon Whitlock had a higher average than any of his games in his run to the final in Munich, but it wasn’t enough as Jamie Hughes took that one 6-4 despite a 164 checkout from ‘The Wizard’.

Some other seeds were pushed close, however: Mensur Suljović requiring all eleven legs to squeeze past Mickey Mansell, Gerwyn Price coming through a thriller with Friday’s nine-dart hero Steve Beaton, and James Wade coming from 5-2 down to see off Luke Humphries 5-2. That result saw Humphries announce on Facebook that he was having trouble with anxiety and would be taking an indefinite break from the game.

European Darts Open finalist Rob Cross isn’t able to meet current nemesis Michael van Gerwen until the final, and started his campaign in style with a 102 average and 6-4 win against Chris Dobey, sealing progression with an 11-darter. Elsewhere, Peter Wright secured a much-needed win against Irishman Steve Lennon, averaging 102 and starting to look back on form, although we all know that’s only if he sticks with these darts.

‘Snakebite’ will take on Dave Chisnall on Sunday, who kicked off the evening session with a scrappy win over Ted Evetts. One of the highlights of day two in Saarbrücken was the game between Daryl Gurney and Dave Pallett, played in a fantastic spirit. There was a particularly comical moment in the sixth leg when Pallett, on a 170 finish, found the first two treble-20s, and revved up the crowd only to opt for a single 18!

He stole the show but it was Gurney who got the win on the board as he goes in search of a second Euro Tour title in a matter of weeks. Darren Webster beat Vincent van der Meer 6-3 and will face Ian White in the last 16. ‘Diamond’ recovered from a shaky start to win for just the second time on the continent this year, averaging over 101 win in a 6-3 success over Jeffrey de Zwaan. Joe Cullen also moved through to the final day of action, seeing off Jerry Hendriks 6-1.

The German Darts Open culminates on Sunday as Michael van Gerwen looks for an incredible 31st title on the European Tour with a very strong field out to stop him, including Rob Cross, James Wade, Gerwyn Price and of course Raymond van Barneveld.

Beaton in 9 dart heaven as Euro Tour begins in Saarbrucken

Bennett and Care were victorious in Chorlton