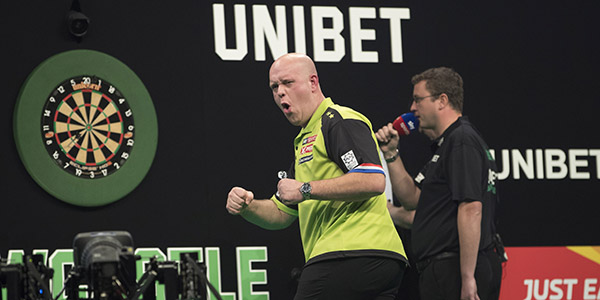 Five different players averaged over 100 as the 2019 Unibet Premier League got underway in Newcastle with Michael van Gerwen kicking off his title defence in style.

Following a slightly underwhelming BetVictor Masters with only 25% of the ton-plus averages that we saw two years prior in Milton Keynes, one of the PDC’s showpiece events put that to bed at the Utilita Arena. The new ‘contender’ format that was introduced due to Gary Anderson’s withdrawal came under much criticism, but the reasons for its inclusion were clear to see on night one as local north-east hero Chris Dobey surged into an outstanding lead over Mensur Suljović before the Austrian came back firing to secure a point.

Elsewhere, James Wade and Gerwyn Price got off to winning starts while Peter Wright and Rob Cross shared the spoils in an encouraging display for both players after rough patches. The Premier League season got underway with a meeting of two former champions. James Wade, 2009 winner, was left out last year, but was impossible to ignore in 2019 after two televised titles. He faced controversial pick Raymond van Barneveld in his final year on the circuit before retirement.

The tournament got off to an incredible start as three 180s were fired in during the very first leg as Wade took in in 13 darts. The Dutchman missed darts to break, though, and that became a recurring theme as he did the same in legs three and five. He was also relying on clutch checkouts on his own throw to stay in the match, but the tide turned in the seventh leg as ‘Barney’ pinned double 18 to take the lead for the first time.

However, his finishing woes continued with Wade levelling things back up, before storming to the finish line. ‘The Machine’ won the final two legs in 25 darts, and completed the match with a fantastic 124 checkout on the bull to spark an outpouring of emotion from the Aldershot man, marking his Premier League return in style with a 7-4 win and an average of just over 99. For Van Barneveld, he faces an uphill struggle and will need to start picking up points if he is to avoid being the player eliminated on Judgement Night.

The second game at the Utilita Arena saw all eyes focused on goings on off the dartboard as Gerwyn Price took to the stage during a chorus of boos following his recent DRA referral and following fine. ‘The Iceman’ didn’t seem to be affected by that early on, but he could only watch on as two great legs from his opponent Daryl Gurney saw ‘Superchin’ take the early advantage. Price was showing plenty of emotion, and it was certainly helping his game as he won the next five legs, all in fifteen darts or fewer.

Gurney wasn’t playing badly at all and managed to hold throw twice in the closing stages but it was in vain as the Welshman found double 20 to seal his first ever Premier League win and move top of the fledgling table. The first ‘contender’ was next up against Champions League winner Mensur Suljović, and after a very nervy start, local hero Chris Dobey rallied superbly to take the first leg in 15 darts.

‘The Gentle’ improved following a disappointing opening, but Dobey was irresistible as he stormed into a 5-1 lead. He then missed four darts to move 6-1 ahead and three more to move 6-3 ahead as Suljović came back. It seemed the Austrian had done enough to secure all two points when he broke the throw of ‘Hollywood’ to go one away, but Dobey broke straight back superbly to seal a share of the spoils. If the debutant plays like that for the rest of the year, he could well be making his full debut in the Premier League in 2020.

Most of the talk in the build-up to the matches of night one was surrounding the rematch of the 2018 Premier League and 2019 World Championship final, between Michael van Gerwen and Michael Smith. The defending champion won his fifth successive Masters title last weekend without being anywhere near his best, and he raised his level slightly in Newcastle, but it was ‘The Bullyboy’ who won the first leg on a 93 checkout.

Van Gerwen hit back with a 12-darter of his own to level up early on, before the first break of the match came in the sixth leg as the Dutchman capitalised on four missed darts from Smith to move 4-2 in front. A 19-dart break back from the St. Helens man was followed by a scintillating end to the match as he took out 150 to make it 4-4 before three consecutive holds saw Van Gerwen go one away from an opening victory in this year’s Unibet Premier League.

He found the best leg of the match in the most important leg, finishing in 11 darts to see off a valiant effort from Smith and win 7-5 with an average of just under 105 and a checkout percentage of 58. Opening night in Newcastle was rounded off between two out of form stars who have a lot of ranking money to defend this year. Somewhat surprisingly, Peter Wright had stuck with the darts that got him to the semi-finals of the Masters, but it was Rob Cross who took the early initiative, a brilliant 10-darter making it 2-0.

However, ‘Snakebite’ improved significantly from that point on, hitting his first four darts at double to turn the match on its head and lead 4-3. After a shaky opening from the world number three, it was a very solid display from the pair with only two breaks of throw and almost all legs won in under 15 darts, meaning they both finished with 100+ averages. As Mensur Suljović did earlier in the evening, Peter Wright missed a solitary dart to win 7-5 and Cross punished him, pinning double 16 to end a fantastic night of Premier League darts with a draw.

44 maximums and an overall average of around 180 saw one of the PDC’s showpiece events get off to an incredible start as Gerwyn Price’s first win in the competition sees him top the very early table, with Raymond van Barneveld unlucky to be sitting in the relegation spot. However, that will be sure to change over the next few months as the Premier League gets into full swing. Before then, all ten players who appeared at the Utilita Arena apart from Mensur Suljović will head to Wigan for Players Championships 1 and 2 before Glen Durrant takes to the stage in Glasgow next Thursday.

Riley’s UK Open Qualifiers latest: Newton and Taylor among those heading to Minehead