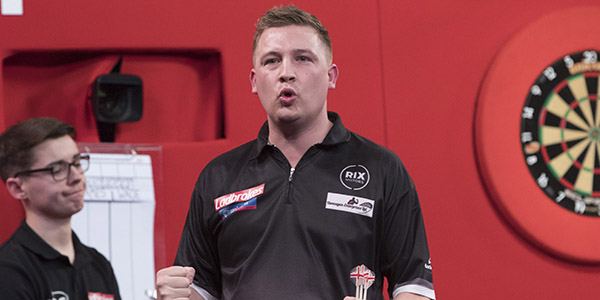 Chris Dobey reached his first major final for two-years as he denied James Wade in Minehead while Steven Bunting finalised the last eight line-up with a surprise win over Wright.

Dobey, who reached the final of both Players Championship 5 and 21 en route to Butlins Resort in Minehead, pulled off a 6-3 win over Dave Chisnall earlier in the day before battling back from 6-3 down to edge past an in-form James Wade 10-9 on the main stage; surviving multiple match dart on course to victory.

With the likes of Peter Wright and number one seed Ian White being defeated on day two in Minehead, the entirety of the top half of the draw has been thrown wide open with either Dobey, Daryl Gurney, Danny Noppert or Stephen Bunting having to chance to participate in a major final.

Bunting eased through to the fourth round with a win over an under-par Madars Razma before producing a finishing masterclass in a narrow 10-9 win over a Peter Wright that has failed to get further than the last 32 at Butlins Resort since winning the UK Open title around 18 months ago.

Daryl Gurney set up a quarter-final date with Chris Dobey following a resurgent win over fellow Northern Irishman Brendan Dolan – who led 2-0 and 4-2 in the tie. Gurney averaged over 101 and hit nine maximums in a emphatic display. Gurney will face Northumberland’s Dobey in a repeat of last year’s Players Championship Finals fourth round clash that Gurney came out victorious.

Danny Noppert, who is the reigning Finder Darts Masters champion and a former BDO World Championship finalist, has made huge strides since making his PDC debut in January. Noppert has already qualified for three major televised events and managed to reach his maiden PDC major quarter-final following wins over Suffolk’s Mervyn King and Poland’s Krzysztof Ratajski. The Dutchman thrashed Krzysztof Ratajski – who had already seen off Grand Slam winner Gerwyn Price and Adrian Lewis but came up short at the fourth round with a sub-standard performance.

Defending champion Michael van Gerwen breezed into the last eight with a 10-4 win over an impressive Stephen Burton. Van Gerwen had already thrashed Keegan Brown 6-1 earlier in the day. Van Gerwen set up a quarter-final clash with Steve Lennon after the Irishman fought back from 5-0 down to win 10 of the next 12 legs and reach his first quarter-final at Butlins Resort, Minehead.

Gary Anderson, a former Players Championship Finals winner, produced ton-plus averages in hefty wins over both Simon Whitlock and Joe Cullen to book his place in the quarter-finals; making up for last year’s first round exit at the hands of Mickey Mansell. ‘The Flying Scotsman’ fired home five maximums, a 106 outshot and a 100.58 average in a one-sided 10-2 win over an out of tune ‘Rockstar’.

The quarter-finals will take place on Sunday afternoon in Minehead with the semi-finals and final taking place on Sunday evening as well as the much-anticipated World Youth Championship final between Dimitri van den Bergh and Germany’s Martin Schindler.