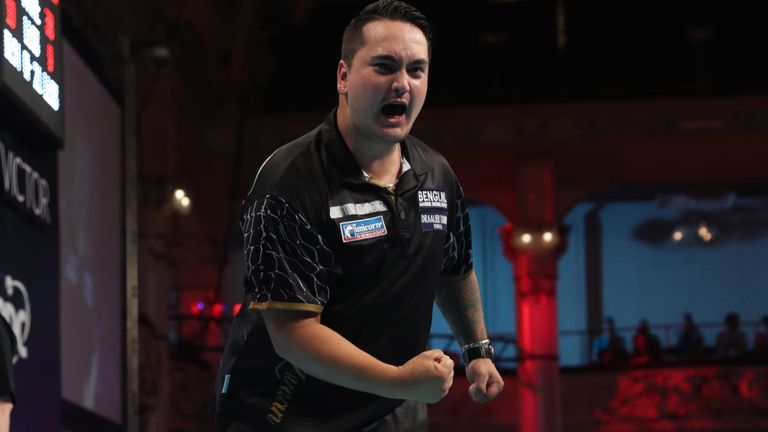 Jeffrey de Zwaan lifted his second PDC ranking title at Barnsley’s Metrodome as he thrashed Stephen Bunting 8-2 in the final of Players Championship 14.

It was on April 29 last year that de Zwaan tasted success for the first time on the ProTour, and just over a year on, the Dutchman returned to the winner’s circle after coming through a tough field in Barnsley.

De Zwaan was in scintillating form in the first event of the midweek double header, but narrowly lost out in a deciding leg in the quarter-finals against William O’Connor – who became the first Irishman to win a PDC ranking title.

It was a different story for the Dutch prospect on Wednesday afternoon, however, as he breezed to the £10,000 title, averaging over the 100 mark in five of his seven matches played.

De Zwaan got proceedings underway in Barnsley with a 6-4 victory over Luke Woodhouse, before brushing aside James Wilson to progress to the third round – where he’d average 106.5 in a 6-3 dismantling of World Championship and Premier League finalist, Michael Smith.

Dave Chisnall, who reached the semi-finals at the German Darts Open prior to heading to South Yorkshire, was next to endure defeat at the hands of the talented 23-year-old. The St Helens man had the higher average (103.5) but it was the Dutchman who prevailed to the last eight, winning 6-4 in a thrilling affair.

De Zwaan edged out Ryan Joyce in the quarter-finals in a deciding leg, before coming back from 3-2 behind against Arron Monk to book his place in the Players Championship 14 final in Barnsley – where he sauntered past Stephen Bunting to complete the St Helens trivector.

Following his triumph in Barnsley, the Netherlands’ de Zwaan told pdc.tv: “I played really well today – the feeling was that I was flying, every dart I was throwing was going straight in and that’s a great feeling,” said De Zwaan, who moves up to 36th on the PDC Order of Merit.

“I’m happy with the win. I’m feeling good, my confidence is there and the darts are going great and I’m really happy.”

De Zwaan raced into a 4-0 lead in the final, before Bunting got off the mark, pinning his favourite double 16, only for The Hague’s de Zwaan to snatch the next two and more five legs clear of the former champion of the world. Bunting doubled his tally as he fired in a 114 checkout, but his luck ended there as ‘The Black Cobra’ reeled off the next two, including a 107 checkout to seal the deal and deny Bunting a first PDC title for three years.

Despite suffering defeat in the final, it was a valiant effort from ‘The Bullet’. He enjoyed wins over Jamie Lewis, Jamie Hughes, Corey Cadby and Jelle Klaasen to reach the quarter-finals, before denying Joe Cullen in a tight tussle and coming from 5-2 down to see off Lithuania’s number one, Darius Labanauskas, in a controversial match that involved a slight delay due to air-conditioning.

Elsewhere, Labanauskas, who became the first Lithuanian to qualify for the World Darts Championship in December, reached his maiden PDC semi-final in an inspired run from ‘Lucky D’, while Peter Wright was dumped out at the last 16 stage by Harry Ward just a round after whitewashing Gary Anderson.

Gerwyn Price exited at the same stage as ‘Snakebite’ following a resurgent performance from Krzysztof Ratajski – who averaged 99.7 in battling back from 3-1 down, as the third round stole the likes of Michael Smith, Corey Cadby and Nathan Aspinall.

Following his good performance at PC13 and in Germany, Raymond van Barneveld was knocked back to square one following a first round defeated from Krzysztof Ratajski – who averaged 112.3 in a blistering display in a 6-1 demolition.

German Darts Open finalist, Ian White, was denied in the second round by Jelle Klaasen, while Jonny Clayton – a winner on the ProTour this year – was dumped out in the first round at the hands of Harry Ward.

History was also made in Barnsley as five players of German descent progressed past the first round, as Robert Marijanovic, Christian Bunse, Max Hopp, Gabriel Clemens and Martin Schindler were all victorious.