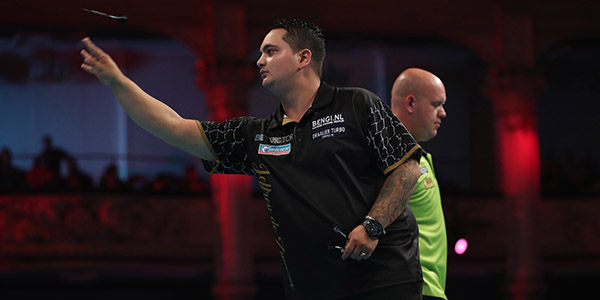 “Jeffrey De Zwaan pulled off a huge first round shock as he sent Michael Van Gewwen packing in Blackpool while another three fascinating games took place.

The opening day of the Betvictor World Matchplay saw seven PDC winners take to the stage as well as two two-time world champions.

Adrian Lewis survived a scare in the opening game of the night at the prestigious Winter Gardens as he battled back from 7-3 down to edge past James Wilson 10-8 in Blackpool.

Lewis opened up an early 3-2 lead at the first interval only for the ‘Lethal Biscuit’ to produce a lethal finishing display and rush into a 7-3 lead.

‘Jackpot’ was forced to dig deep as he eventually put himself one leg of victory at 9-8 before hitting a tremendous 116 finish, the highest of the clash, to clinch his place in the second round.

Following his prolonged first round match with Wilson, Lewis said: “I haven’t been on TV for seven months so I thought I’d make my most of my time up there!

“I knew it was going to come eventually, it was just a case of the stage of the match I needed it most.”

Jeffrey De Zwaan was one of two debutants to feature on the opening day in Blackpool and he was handed with draw he wanted in world number one Michael van Gerwen.

‘The Black Cobra’ has previously beaten Van Gerwen on the big stage at the UK Open, though, that was a completely different occasion with no crowd being involved in the event.

De Zwaan continued his perfect record against Van Gerwen on television as he sent the Dutchman packing in the first round, whilst ‘Van Gerwen’s going home’ was ringing around the Winter Gardens.

The match was a close encounter as the pair still couldn’t be spilt apart after 12 legs, courtesy of a sensational 121 checkout from De Zwaan. From that stage, the young Dutch star reeled off four straight legs to hand Van Gerwen his first first round exit at the World Matchplay since 2009, where he was beaten by Raymond Van Barneveld.

“I really don’t believe it,” said a over the moon De Zwaan at the Winter Gardens.

“I played really well and the confidence was there. I know I beat him once and that was confidence for me.”

De Zwaan added: “At 5-5 I said to myself ‘keep pushing’ and you can see what happened.”

Dave Chisnall, a four-time quarter-finalist at the World Matchplay, set down a marker with a 10-4 win over a frustrated Keegan Brown.

Brown dashed out of the gates as he opened up an early 3-2 advantage but from there it was all down hill for the Isle of Wight ace as Chisnall raced to victory, hitting outshots of 140 and 148 en route to round two.

Chisnall will face fellow St Helens ace Michael Smith in the second round following the ‘Bully Boy’s 10-6 rout of Jonny Clayton at the Winter Gardens.

There were no signs of jet-lag following Smith’s trips to Las Vegas and Shanghai in the last couple of weeks as he eased to victory, averaging 97.43 en route to victory.

With the match level at 2-2, Smith opened up a hefty 5-3 lead only for Clayton to convert an outstanding 154 checkout to move within one of the Shanghai Darts Masters champion.

From that position, Smith won four of the next five legs to book his place in the second round for the second time at the Winter Gardens. ‘Bully Boy’ will hoping he can emulate last week’s run in Shanghai and walk away from the Winter Gardens with a £115,000 cheque and the Phil Taylor Trophy.

The 25th edition of the World Matchplay will resume tomorrow afternoon in Blackpool. Tomorrow evening will be special as Raymond Van Barneveld, Rob Cross and Gary Anderson are all in action.