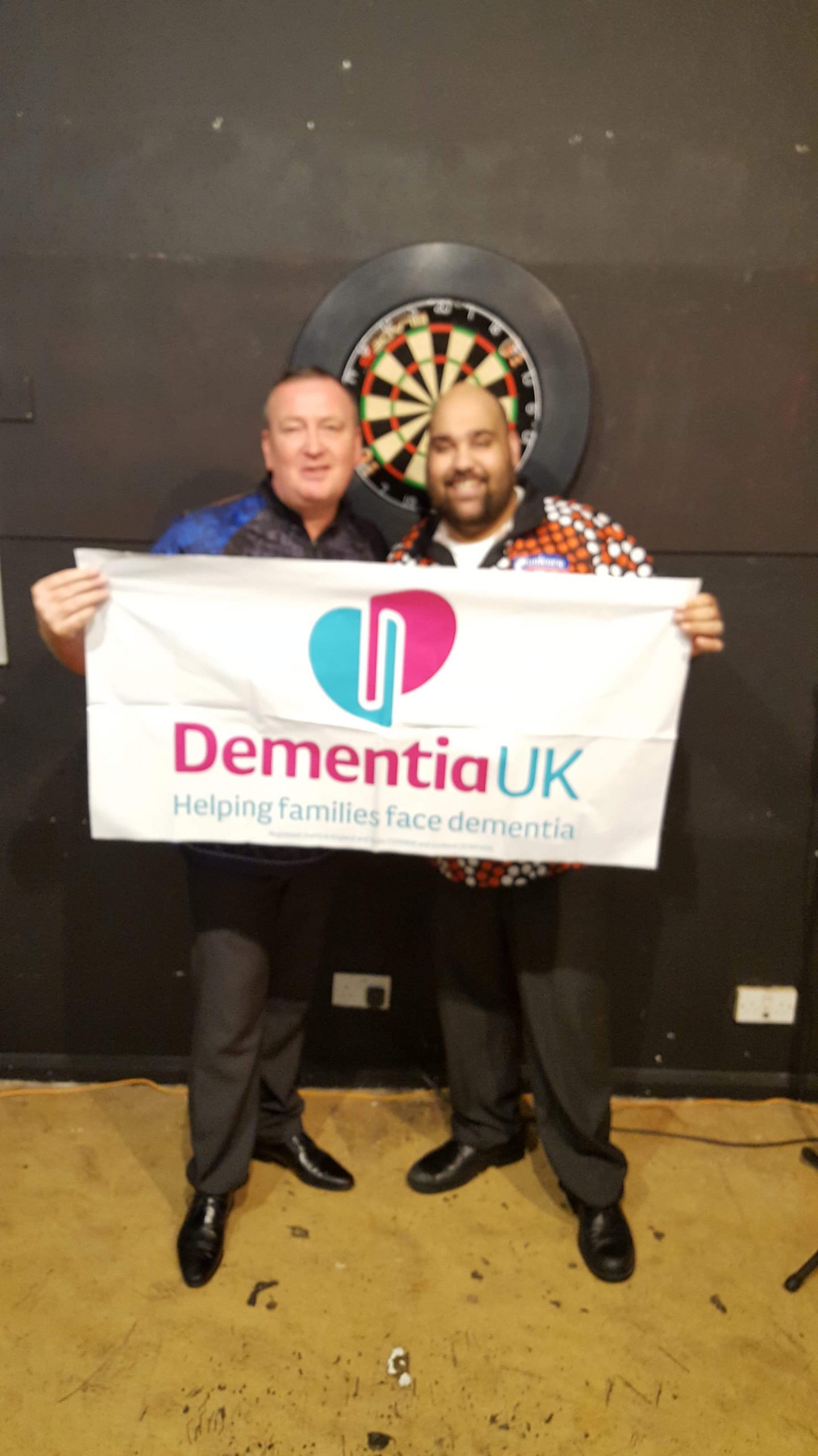 Lazenby Social Club, situated near the backdrop of the glorious and rolling Eston Hills and a short drive to the North East coastal town of Redcar, played host to an entertaining and thrilling evening of tungsten throwing starring two of the PDC Top 32 contenders. Glen “Duzza” Durrant, the recent Dublin Grand Prix Semi-Finalist and Kyle “The Original” Anderson, who hit a world record average of 134.84 at the fifth Players Championship in 2015, both played their part in a superb event.

The event in question was in aid of a charity very close to the heart of a local Eston man, sixty-year old Paul Temke Snr who has a very good reason for organizing the exhibition which took place on September 4th in Teesside. Paul takes up the story.

“Tonight is to raise some much needed and vital funds for Dementia UK because I have a brother, sixty-four year old Malcolm, who lives in a local care home and he has been a resident there for the past two years. He is suffering with dementia and is really poorly, so I thought that I would do something for my brother and to donate everything to Dementia UK,” remarked Paul.

“I recently organized another event for Roseberry Park which is situated on the grounds of our local James Cook Hospital in Middlesbrough and with the money raised we bought the in-patients some items to make their stay more enjoyable,” recalls Paul. “Malcolm has been moved from that unit to the Briarwood Care Home situated in Normanby, just a few miles from this evenings event. I can’t thank Glen and Kyle enough for giving up their free time tonight to play against their fans and over 100 people will be in attendance too, thank you. Also thanks too to Vertec Scaffolding, Paul Calvert Carpets, Carl Walton property builders, DJ Paul Quantrill and Nicky Harris electricians.”

Kyle Anderson, another darts professional from the Mac Elkin stable, visited the North East again after his Teesside Masters win a few months back in Thornaby at the other end of the A174 Parkway. “It’s great to be back in the North East, I arrived this morning to great weather and I’m looking forward to tonight. Glen asked me for a favour and you can’t say no to the Duzza in helping him out for Dementia UK,” enthused Kyle. “My calendar was free for this evening to offer my services. I’m looking forward to some friendly rivalry on stage but at the same time I want to see if my form is on par and where it should be. There are a few legs where you can mess around whilst in other legs you want to turn it around on point, that’s what exhibitions are all about I believe.”

The Auckland Masters Champion of 2017, who is well known for his 9-darter exploits on television and floor events, hit that famous combination the last time he set foot on Teesside, “That night in Thornaby I didn’t feel good in the way I was playing until I hit the 9-darter and my game just lifted up after that moment,” laughs Kyle. “Tonight is about raising as much money as we can, having some fun for the crowd and hopefully the night will run like clockwork.”

A man, who needs no introduction for what he has achieved since obtaining his PDC Tour Card in January and reaching the top 32 in ten months, is none other than Grangetown’s own, Glen Durrant. “I have never ever lost a game of darts in the Lazenby Social Club, I used to run the Teesside Ranking Events in here, I won all of the Lazenby competitions, the Norman Bennett Memorial and the Boxing Day ones too. Between 2008 and approximately 2012 I was unbeaten here, so it is nice to be back for that reason,” reminisces Duzza. “The club needs valuable support too and the revenue behind the bar will help and the guy who is running the event, Paul Temke Snr, Dementia UK means an awful lot to him and his family. It will be a great night with Kyle appearing here and the crowd are going to love him. They have seen me a thousand times and it gives Kyle a chance to play in front of a brilliant crowd.”

Amongst the crowd, there are quite a few of Glen’s family watching him play on stage, who also follow their three times BDO World Champion up and down the country. “My Dad is here and it’s fantastic to play in front of him. I think it puts that little bit of pressure on you and I think that you were with me Les when I played my Dad at snooker recently and every shot that I played he was moaning that I should have done this or I should have done that,” laughs Glen.

“Tonight is about raising as much money as we can for Dementia UK and hopefully MC Gok (Paul) can liven up the crowd early doors when he referees my games and MC Joe Goodison too, likewise for Kyle’s matches. There are going to be 120 people in here this evening with the room full so it should be a success,” said Glen. “Paul should take the plaudits for tonight in what he has achieved, like I said, the crowd have seen me a thousand times, if it was just me on tonight then they wouldn’t sell a ticket. Kyle is here which makes all the difference and the charity will benefit from that.”

Paul Temke Snr has a heart of gold and cares deeply about his brother Malcolm and others who need the support of Dementia UK up and down the country and for much needed research for the future and to support family and friends alike in need. Through raffles, football cards, auctions, including a signed Kyle Anderson shirt which was won by Geoff Howsden from Thornaby for a fantastic sum of £100 and the generosity of the Teesside public, £650 was raised in total. A staggering sum of money.

Take a bow Paul. You deserve it.