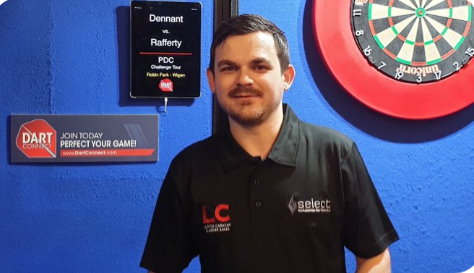 The vital opening weekend kicked off on Saturday, and Robert Collins and Scott Mitchell kicked off in style, all but sealing themselves spots in the opening Players Championships if any Tour Card Holders withdraw.

Over 300 entrants in all four events meant that it was a marathon weekend with over twelve hours of play on both days leading to some ultra-competitive darts, and it was former Tour Card Holder Dennant and relative PDC newcomer Van de Wal who came out on top.

In the early stages of Challenge Tour 3, Andy Jenkins hit a 9-darter against Lukas Wenig, only to go on and lose the match 5-4 to continue a nightmare start to the tour for one of its most successful players in 2019.

Scott Mitchell went out to a fine display from Liam Meek, while the man he beat in the CT2 final, Andrew Gilding, succumbed to Connor Scutt’s 105 average in the last 128.

Collins went out to Australian Gordon Mathers in the same round that two consistent players over the weekend, Cameron Menzies and Keane Barry met with the former winning 5-1.

In the last 32, James Richardson posted an average of 108 against Chas Barstow and Richie Burnett produced his best run since dropping off the tour by moving into the last 16 with a 5-3 defeat of Mark Barilli.

The former World Champion was beaten by another resurgent player in the form of James Hubbard, while Menzies became the first man to make multiple quarter-finals in Wigan.

There was an international feel to the last eight with Boris Koltsov falling to Hubbard and Mathers easing past Paul Williams. Rafferty and Dennant beat Usher and Menzies respectively at the same stage.

The semi-finals saw Dennant and Rafferty book places in the final with mid-80s averages, before ‘The Scholar’ claimed his second Challenge Tour title with a superb deciding leg after a closely-fought battle with few mistakes.

It was straight on to Event Four, and there were some signs of fatigue with notably fewer high averages than normal. Stephen Burton did produce a 101 but only to lose in the last 512.

Collins, Mitchell. Rafferty and Dennant were among the last 256 winners, but all fell relatively early apart from Mitchell, who made it to the last 16 where he was whitewashed by Arjan Konterman.

The draw was starting to appear very top heavy with the vast majority of the better-known and better-performing players in the top half, among them Tytus Kanik and Scott Taylor who eased through to the last 8 alongside Cody Harris.

The bottom half was a real chance for someone, and Jitse van der Wal grabbed it, averaging 92.5 against Hubbard, who had another excellent run, to move through to the last four against Daniel Ayres, a 5-4 winner over Belgium’s Brian Raman.

Konterman was starting to flow, and edged out Cody Harris before putting in one of the best performances of the weekend to deny Scott Taylor in the semi-finals with a 99 average and book an all-Dutch final against Van de Wal, who saw off Ayres in a scrappy game.

The first four legs were shared, but the 20-year-old’s finishing did the damage in the latter stages to seal a 5-2 win and the Challenge Tour 4 title.

Mitchell now holds the overall lead in the Order of Merit after 4 of 24 events, with Event 1 runner-up Adam Huckvale leading the posse of players who failed to win an event this weekend.

Pending withdrawals, the top four of five players will get entry to the first ten Players Championship events, starting on February 8 in Barnsley.