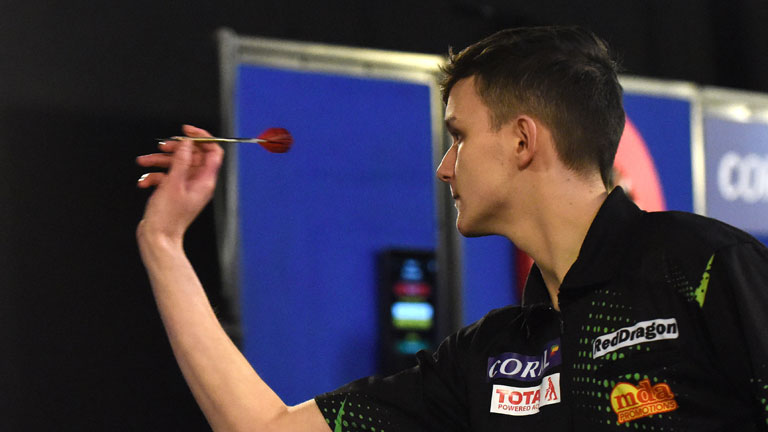 Nathan Rafferty and Wessel Nijman took the opening titles of the year in Wigan while Dawson Murschell pinned the perfect leg in the opening Development Tour event of the year.

Rafferty, from Tyrone in Northern Ireland, claimed the opening event of the Development Tour season after a consistent and successful day at the Robin Park Leisure Centre in Wigan.

The Northern Irishman rose onto the PDC scene when he dumped Peter Wright out on the opening day of the Coral UK Open in March and has now gone onto claim his first title in the Professional Darts Corporation.

Rafferty edged past Carl Batchelor in a last leg decider in the opening round before thrashing James Carrol despite only averaging 77.

A 101 average against Liam Hill and a victory over Reece Colley put Rafferty into the last 32 where he edged past Brian Raman 4-3. The Tyrone-based ace continued his good form as he comfortably saw off George Gardener 5-1 with an average of 98.9. Rafferty took his place in the final with a 5-2 win over Callan Rydz.

The 18-year old would face Canadian Dawson Murschell in the final – who made the move from Medicine Hat in Canada to follow his dreams and play full time on the PDC circuit. ‘Awesome Dawson’ completed the perfect nine-dart leg in his 4-2 victory over Declan Fishwick – in a match where Murschell averaged over 107.

The first four legs went with throw in the final before the Northern Irishman broke Murschell’s throw and decided the outcome of the encounter, as the remainder of the legs also went with throw.

Rafferty suffered a first round exit in the second event of the day as Dutchman Wessel Nijman went onto to take the £1,000 in prize money and the title in Wigan.

Nijman began the tournament with back-to-back whitewashes before a 4-1 wins over Adam Howard and James Thompson setup a last 16 clash with Callan Rydz – a semi-finalist in the opening event of the day.

Nijman edged past Rydz before also edging out Belgium’s Mike De Dekker to reach the semi-finals at the Robin Park Leisure Centre.

A 5-2 win over Tom Lonsdale put the Dutchman into the final where he’d take on PDC newcomer, tour card holder and reigning JDC European Open champion Bradley Brooks – who enjoyed a successful day in Wigan.

Brooks saw off some talented players on route to the final including the likes of DT1 finalist Dawson Murschell, Scott Dale, Dean Finn and James Carrol – in a match where the Blackburn supporter averaged 103.5.

Nijman averaged 89.5 in the final as he edged past Brooks 5-4 to claim the second Development Tour title of the year.

The Development Tour will return tomorrow morning with the third and fourth events of the year taking place, once again, at the Robin Park Leisure Centre in Wigan.

Hopp and Humphries perform on day one in Saarbrücken